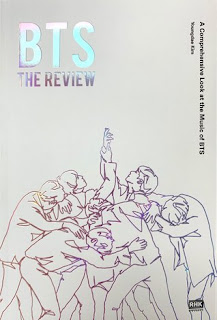 I expected quite a lot of this Youngdae Kim’s book “BTS – The Review: A Comprehensive Look at the Music of BTS” as Youngdae Kim is a noted music critic and author who serves as a member of the Selection Committee for the Korean Music Awards. He is born and raised in South Korea but completed his Ph.D. in ethnomusicology at the University of Washington and is currently living in the USA where he is a critical column writer for MTV and Vulture by New York Magazine among other things.

He has always been interested in and proud of BTS and I thought that with this book BTS would finally get what they deserve: a serious, scholarly look at their music from their debut in 2013 up onto early 2019 when the book was written. With the subtitle “A Comprehensive Look at the Music of BTS” it was what the book seemed to promise its reader, but I must say that I was somehow disappointed.

Yes, Kim does review every single BTS album and the mixtapes of the different members too, but the reviews are short and mostly concentrated on the ballads as that seems to be the genre that Kim prefers. By doing so, he neglects to give in-depths analyses of the backbone of BTS’ music production as BTS started out as a hip-hop team and it is still the three rappers who write the majority of songs that also include funk, r&b, jazz, Latin, EDM and many other genres. In the same way the rappers take a backseat to the vocalists in this book which is quite strange as the rappers are the fundament of the band that existed as a trainee group before any of the vocalists were added.

As you can probably see, I’m not that thrilled with the reviews, but then again, the reviews only make up one part of the book. The rest of it consists of interviews with people in and around the Korean music industry, whereof most of them have nothing to do with BTS. There is an interview with the Korean hip-hop journalist Bonghyeon Kim, the Literary Critic Hyeongcheol Shin, the Chairman of the KMA Selection Committee Changnam Kim, the popera tenor Hyungjoo Lim and Billboard’s K-pop columnist Jeff Benjamin who more or less backstabbed BTS as soon as he was paid to promote another Korean band. The composer brother Su is also interviewed and at least he worked with BTS especially in their early days, but he also worked with many other K-pop acts. Of course, the people interviewed mention BTS, but most of the interviews are about K-pop as such or about the interviewees. There are no interviews with BTS themselves, with the founder of their company Big Hit, Bang Sihyuk (Hitman Bang), or with their main producer Pdogg, which is very disappointing. After having read the book, I think the subtitle should have been, “A Comprehensive Look at K-pop and how BTS fit into it” instead. At least, that would have been closer to the truth!

Youngdae Kim also mentions the very unique relationship between BTS and their fans, ARMY, but throughout the book he insists that their fans are teenagers or people in their twenties and that they are all girls. In the last chapters of the book, he finally acknowledges that the band has middle-aged fans as well, but not that they have male fans. Seeing the latest Korean statistics that have been widely quoted in the western press too, at least 55% of BTS fans are 30+, and these statistics don’t include fans over 70, so the true number is probably 60%, which makes the core audience quite different from the general audience of other K-pop acts. Besides, about 20% are males of all ages, but they are hardly ever included in statistics.

All in all, I have to say that I think “BTS – the Review” is a rather misleading description of BTS and their music. Of course it is not as bad as what we are used to see written by people who don’t know anything about BTS, but at the same time it is also more annoying as the author should have known better than painting a picture of BTS as a band that is mostly carried by their ballads and their vocalists and that has mainly female teenage fans. I was very disappointed, even though Kim in the epilogue correctly concludes that the BTS phenomenon is a movement that BTS and ARMY created together.