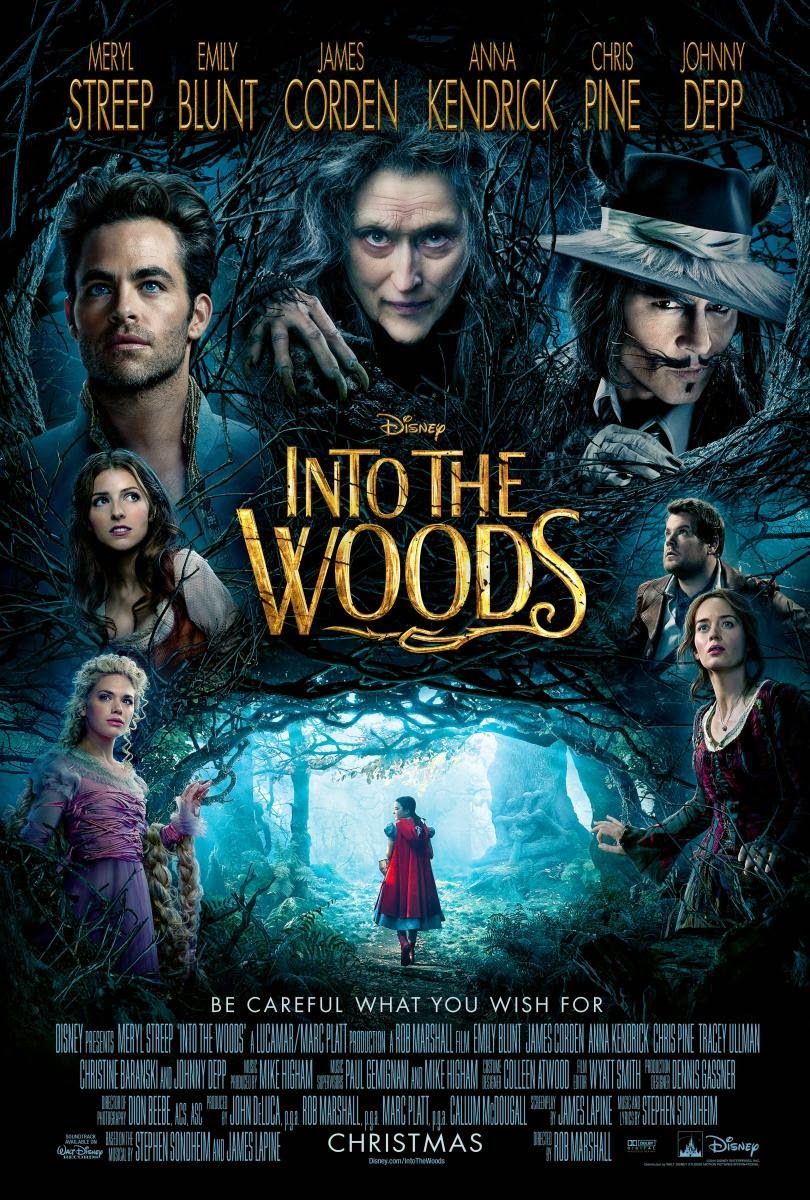 The PG rated musical film “Into the Woods” directed by Rob Marshall is based on a 1986 stage musical by Stephen Sondheim and James Lapine. The story is funny and quite interesting, mixing different fairy tales such as “Cinderella”, “Little Red Riding Hood” and “Jack and the Beanstalk” and creating a new storyline. Some of the actors are very entertaining like Chris Pine (Cinderella’s Prince), Daniel Huttlestone (Jack), Tracy Ullman (Jack’s mother) and Johnny Depp (the wolf who disappointingly is only in two scenes at the beginning of the film), others like Anna Kendrick (Cinderella) and Lilla Crawford (Little Red Riding Hood) are not. They are just annoying. Most characters like the witch (Meryl Streep), the childless baker (James Corden), his wife (Emily Blunt) and Rapunzel (Mackenzie Mauzy) are quite indifferent, though, no matter how good they are at singing. You never get to identify with them, as the musical creates an ironic distance between characters and audience, so you don’t really bother about them. I can live with that, but I can’t stand the music, which is rather unfortunate for a musical.

To make it perfectly clear, I’m not a Stephen Sondheim fan. I’ve always had a problem with his music, as no matter which musical it is, it sounds the same, and I suspect Sondheim of being incapable of writing anything but the same tune. I know that fans call it “stream-of-consciousness” and hail its repetitious patterns, but frankly, it is numbingly boring and it puts a stop to the plot action more than once. In fact, in the cinema where I watched the musical, the audience got so very bored, that whenever a song started, they all turned on their mobiles or headed for the toilets. Only the princes’ song “Agony” sung by Chris Pine and Billy Magnussen is remotely funny, but that is because of the actors, not the music.

Because of the music, “Into the Woods” seems unnecessarily long (it’s 125 minutes, which is at least 35 minutes too long!) and in the end, you just want to go home. Still, I’ll give it 3 out of 5 stars, as the plot, the lyrics and actors like Tracy Ullman, Chris Pine and Johnny Depp are okay: ***
at April 08, 2015 2 comments: