This year I’m celebrating my 30th anniversary as a film critic, so of course I went to review OFF16, which was actually the 41st time that Odense International Film Festival took place here in Odense, Denmark! As usual the festival lasted a week, this year from August 29th to September 4th. 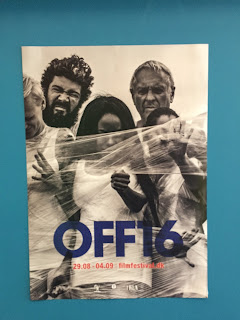 The OFF International Film Festival used to be a festival celebrating imaginative short films, animations and documentaries, but the documentaries no longer have their own competition and the selection jury seems to have forgotten about imagination as most of the short films are bleak and dreary social realism. Don’t get me wrong, there were no really bad films this year, at least I only saw one where I wondered how the heck it had managed to get picked for the competition. On the other hand, there were no extraordinarily good films, either, none that amazed me and really knocked my socks off. They were all more or less just plain okay, but still there had to be found winners, and with the kinds of films that the award juries had to pick from, most of the winners were of course bleak realistic dramas with very clear masculine outlooks on the world and very little imagination. The winners were:
Winners of the main competition: The HCA Award (the International Grand Prix): “When You Hear Bells” by Chabname Zariab, France. The OFF Storyteller Award: “Small Talk” by “Even Hafnor and Lisa Brooke Hansen, Norway. The OFF Artist Award for the film with the strongest artistic expression: “Ten Buildings Away” by Miki Polonski, Israel.
Winners of the Danish competition: Best Danish Short Film: “Melon Rainbow” by Laurits Flensted-Jensen. The FilmFyn Talent Award: “Front View of my Father” by Nicoline Skotte with special mention of “Sia” by Annika Berg.
Winners of the animation competition: The Borge Ring Award for the best animated film: “Yúl and the Snake” by Gabriel Harel, France. The Animation Talent Award (Danish filmmakers only): “Untamed” by Juliette Viger.
Other winners: The Audience Award: “Ztripes” by Amalie Naesby, Denmark. The OFF Youth Award: “Stutterer” by Benjamin Cleary, United Kingdom. 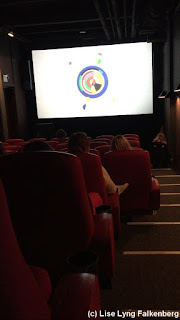 I’m sure that the winning films were all okay, but it kind of makes me sad that imagination doesn’t mean anything to the festival anymore and that the masculine way of making films is still the prevailing and preferred, no matter if the filmmakers are male or female. Oh well, in a way you can say that the entire award system of the festival isn’t fair no matter what, because if you are a Danish animator, it is possible for you to win all of the awards, whereas non-Danish film makers and directors of documentaries and non-animated short films do not have this opportunity. I have never seen a single film winning them all, though, only a few of them, but this year I think that one film should have won them all, namely “Ztripes” by Amalie Naesby. It was by far the best film in all of the categories, wonderfully animated and narrated, funny and with a nice message. It’s not very fair to the rest of the films, though, so here are my winners, had I been the jury (and please notice that I only have two films in common with the official award juries and I don’t have them win the same awards!): 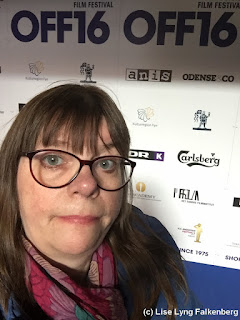 I would have had the warm, almost organic and very well animated “Love” by Réka Busci, Hungary, win the HCA Award, the funny, surprising and very relevant “Bob” by Marc Roessler, Germany, win the OFF Storyteller Award and the beautiful and disturbing “Cold Coffee” by Stephanie Lansaque and Francois Leroy, France, win the OFF Artist Award with special mention of the strange, but enticing “Golden Shot” by Gökalp Gönen, Turkey.
As Danish winners I would have picked “Ztripes” by Amalie Naesby as Best Danish Short Film and the melancholy and youthful “Untamed” by Juliette Viger for the FilmFyn Talent Award.
The Borge Ring Award for the best animated film I would have awarded to the exquisitely animated fairy tale “Mishimasaiko” by Aude Danset, France, with special mention of the tragic and bit scary, but very well animated “Geist” by Alex Sherwood, Ben Harper and Sean Mullen, Ireland. The Danish Animation Talent Award I would have awarded to the poetic “Between Walls” by Sara Jespersen Holm, Denmark.
Finally, my Youth Award would have gone to the subdued “Ping Pang” by Yoichi Tanaka, Japan, and the Audience Award to the cringe-worthily funny “Thunder Road”, which was written and directed by Jim Cummings, USA, who bravely starred as the singing and dancing officer Arnaud. Had there been a documentary category, I would have awarded “West Empire” by Mathieu Le Lay, France, the best documentary award. 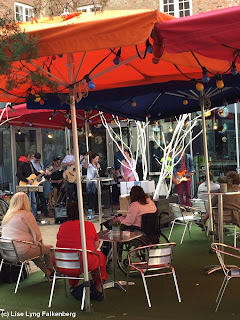 Each year the festival has what is called an “OFF Focus” programme, which consists of everything that is happening during the festival that isn’t the film competition. Usually I attend several Focus events, but this year I couldn’t as I am still recovering from having had knee surgery three times in three years. Had I been in better health, some of the things I would have loved to attend were the screening of six animated films from the National Film School of Denmark, North Atlantic Film Days with screenings of films from the Faroe Islands, Iceland and Greenland and some of the Playoff events. Playoff is a new festival-within-the-festival that focuses on gaming, animation and film and I would have loved to attend the screening of the documentary “GTOF” about sexism in the gaming world followed by a discussion with the director of the documentary, Shannon Sun-Higginson. Unfortunately I couldn’t, although I think sexism is a very current topic. Not only in the gaming world, I am afraid, as I noticed that a least 1/3 of the screened OFF16 short films (among them several of the award winners) were sexist, many unpleasantly so, bordering on misogyny. I find that very sad and furthermore it’s a bit unsettling that OFF16 boosted such films. Anyhow, I hope to be in better health to see better films next year. See you at OFF17?
at September 05, 2016 2 comments: