The Water King's Conservatory and other homes 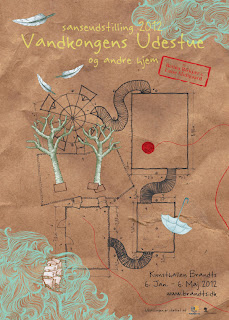 Last week I visited the annual sensory exhibition at Brandts, the huge art centre in Odense, Denmark. This year's exhibition has been created by installation artist Betina Birkjaer and set designer Luise Midtgaard and it is quite okay, although annoyingly small.

The artists based their exhibition on the ideas of Gaston Bachelard's poetics of space, but I doubt that any of the kids knew. You see, the annual sensory exhibition is first and foremost made for children although their grown-ups are allowed to have a look, too. I went there with my daughter, my old friend from university and her daughter and although we all liked the exhibition, we were all disappointed by the size of it.

First we were guided through a small, dark passage lit up by a single old-fashioned street lamp and we ended up at a front door. Behind the door was a front room, divided into two by huge shelves. You were supposed to take off your shoes and put them on the shelves, which we did, before we entered The Water King's Conservatory. 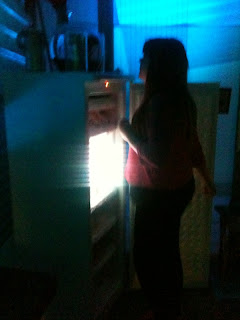 The Water King's Conservatory was lit by cold, blue light. The roof was made of umbrellas and it was furnished with a fridge, a bathtub and a television that was turned into a fish tank. Because of the light, the room had an eerie feel to it, almost as if you were under water. A small passage led to The Earth Elves' Kingdom, a mostly dark room, so low that we had to crawl on hands and knees. The floor was padded with knitwear such as knitted scarves and sweaters and here and there you could look through lit-up pipes to see what was under the knitwear. We spotted medals, broken fragments of porcelain and garbage.

Next up was The Wind Princess' Bedroom, a huge white tent with a floor made of a soft, thick mattress. Lying on your back of the mattress, you looked up into an open umbrella decorated with feathers. The tent was light and airy and it had four adjacent bed recesses complete with pillows and blankets, each one big enough for two people. The Wind Princess' Bedroom also contained the passage to The Wood Gnomes' Workshop, an old-fashioned printing office complete with type cases and paper where the kids could leave letters and drawings for the Wood Gnomes. 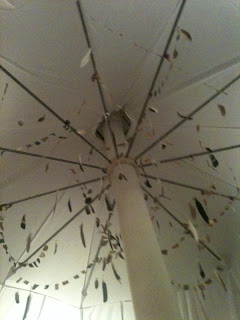 Leaving the exhibition you ended up in the front room again, but in the half behind the shelves. You could get your shoes from there and there was an armchair too where you could sit while putting on your shoes, but that was it. Much too soon we found ourselves outside the front door again, walking past the old-fashioned street lamp. We had spent less than twenty minutes in the exhibition, all of us wondering when the magic would begin, but it never did. The exhibition was nice, but there was nothing that touched you, nothing that scared you or made you laugh or wonder. In fact we all agreed that "The Water King's Conservatory and other homes" was a boring remake of the brilliant and slightly scary sensory exhibition ”Somebody has been dreaming off my house” from 2009.

We went to a nearby café for a glass of wine (and hot chocolate for the kids) and that was probably the highlight of the exhibition. To sum it up I'd have to say that although "The Water King's Conservatory and other homes" is worth a look, be sure to visit the other exhibitions at Brandts, too, otherwise it's going to be a very short pleasure. Three out of five stars: ***
at March 19, 2012 1 comment: 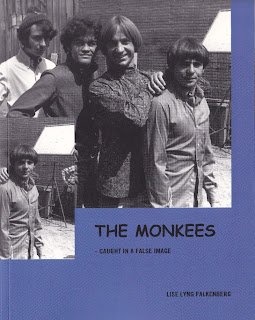 Sadly Davy Jones of The Monkees passed away on Leap Day, February 29th 2012, at the age of 66. He suffered a heart attack.

I first learned about his passing away on Twitter and it made me so sad. I’m not old enough to have been born into Monkees-fandom, but I do remember “I’m A Believer” and “Daydream Believer” from my childhood, songs that featured Davy’s characteristic Manchester voice. Growing up in Denmark I didn’t know about The Monkees being a TV show as in this country it has never been aired and we only knew them as a pop group. When in 1986 we were finally able to receive British TV stations via cable, I caught my first glimpse of The Monkees show and I was hooked. The show lead me to become a die-hard fan, even to the extend, that I wrote a biography about The Monkees based on interviews I conducted with Peter Tork back in 1997. The biography ended up with the title “The Monkees – caught in a false image” and it was published in 2001. At that time I had the pleasure of corresponding with one of Davy’s sisters and she told me that Davy liked it.

Davy himself I only came to meet once and that was in connection with The Monkees reunion concert on March 19th 1997 at Wembley Arena in London. Here Dave came out to talk to his fans in the parking lot before the concert and it struck me how kind he was. And how short! He was only 5 ft 3 and I could see straight over the top of his head!

My biography about the Monkees sold well, but ironically I had just pulled it off the market a few weeks prior to Davy’s death as I am in the middle of switching publishers. A second edition was in the pipeline, due to be published as an e-book on September 6th 2012, in connection with The Monkees 46th anniversary, but now I guess I have to alter my schedule. I have to rewrite parts of the book and if possible get it out sooner in memory of Davy.

Over the past 30 years The Monkees – and thereby Davy Jones – have come to mean a lot to me. They have given me so many hours of quality entertainment, not just from their records and TV-show, but also though their magnificent feature film “HEAD”, the quaint TV-special “33 1/3 Revolutions Per Monkee” and their amazing live performances. Heck, I wouldn’t even have a proof reader today if it wasn’t for The Monkees, as our friendship and collaboration started out because of a common interest in The Monkees! Today my Australian based proof reader is one of my closest friends and to think that I would never have known her hadn’t it been for them. The mere thought makes me shudder!

So, thank you, Davy. Thanks for the many good things you brought into my life with The Monkees. You’ll always be remembered. Rest in peace.
at March 02, 2012 No comments: