Last year I wondered if the H. C. Andersen Festival here in Odense, Denmark, would be a one-off, as it was sponsored by local businessmen and had a lot of “teething problems”. Now I know that it wasn’t, as this year the festival returned from August 17th to August 24th, even with an “s” in the end (Festivals), but unfortunately the problems returned, too. 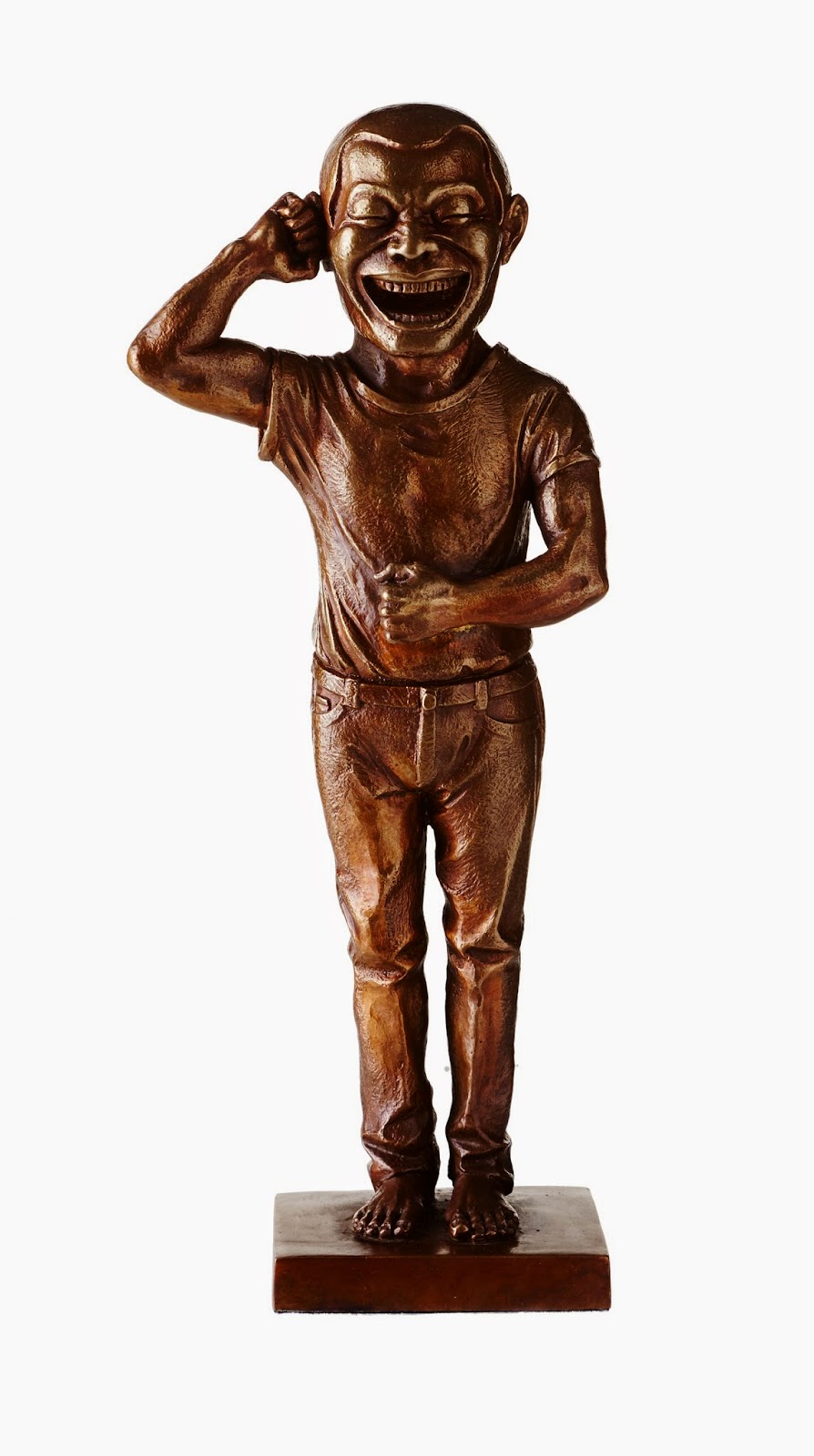 Like last year, the festival(s) was squeezed in between the Odense Flower Festival and the Odense Film Festival OFF in August, making it a bit overwhelming if you want to attend all three festivals. Again there were no big screens at the big events, so people standing in the back couldn’t see anything. Worst of all, the city centre was once more closed for public transportation during the festival making it difficult to get from one venue to another and impossible to live an ordinary day to day life if you happen to live in Odense. 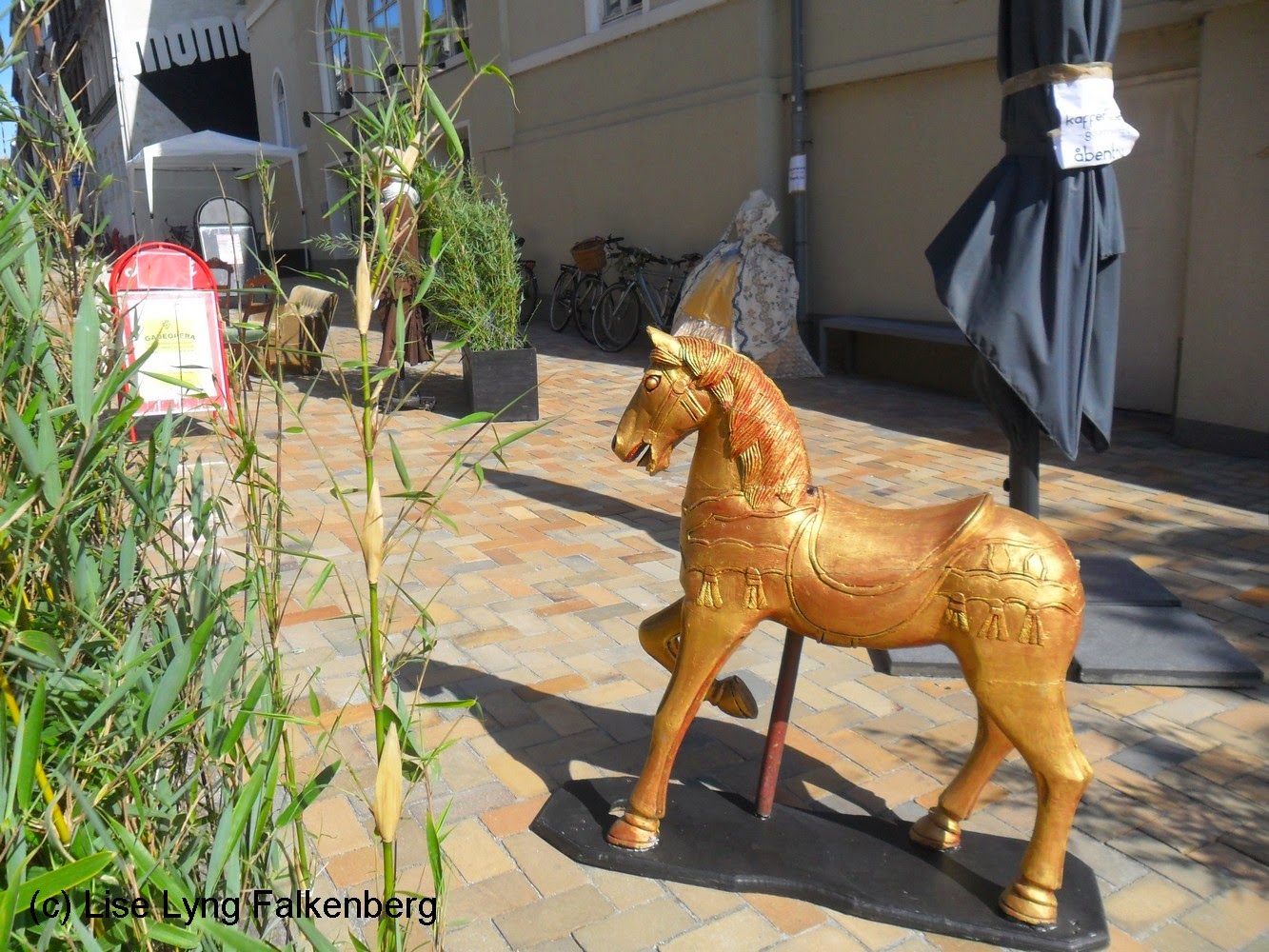 At the moment the entire Odense City centre is being turned into a huge pedestrian zone, so there is just one bus route left through town, and it only operates between 11 a.m. and 4.30 p.m. but not during weekends. This way you can’t go to town during evenings and weekends unless you are able to walk long distances, and I for one am not. During the festival, this bus route was even closed, so you couldn’t get there at all, and personally I had to rely on friends, taxis and long-distance coaches just to get near some of the events. Most of them, especially the ones during evenings I just had to skip. 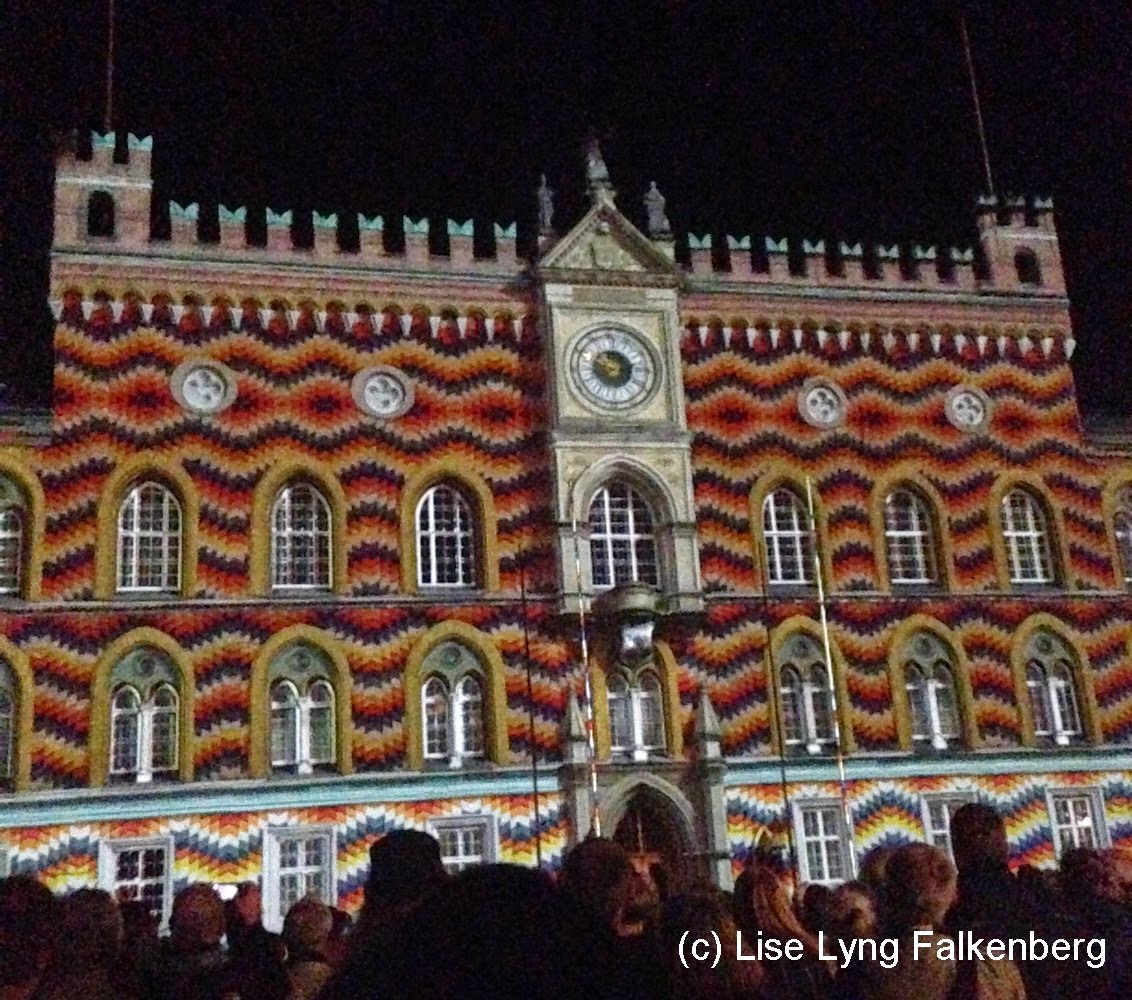 Like last year I had picked three things that I wanted to see:

1. The big light show at the town hall facade made by "We Create Magic"


I’d seen all three of these last year and been VERY impressed by them, so I couldn’t wait to go again, but even before I got out of the door, I had to cancel my attendance to the eVènti Verticali performance. No one could take me and as the show was rather late in the evening, I would not be able to get back on my own. I was SO disappointed, as I’d waited a year to see the talented Andrea and Luca Piallini brothers, so please, please, if you return in 2015, get a slot during daytime!!! Anyway, I had to pick a new number 3 and I chose the 3D street art by Dutch artist Leon Keer. 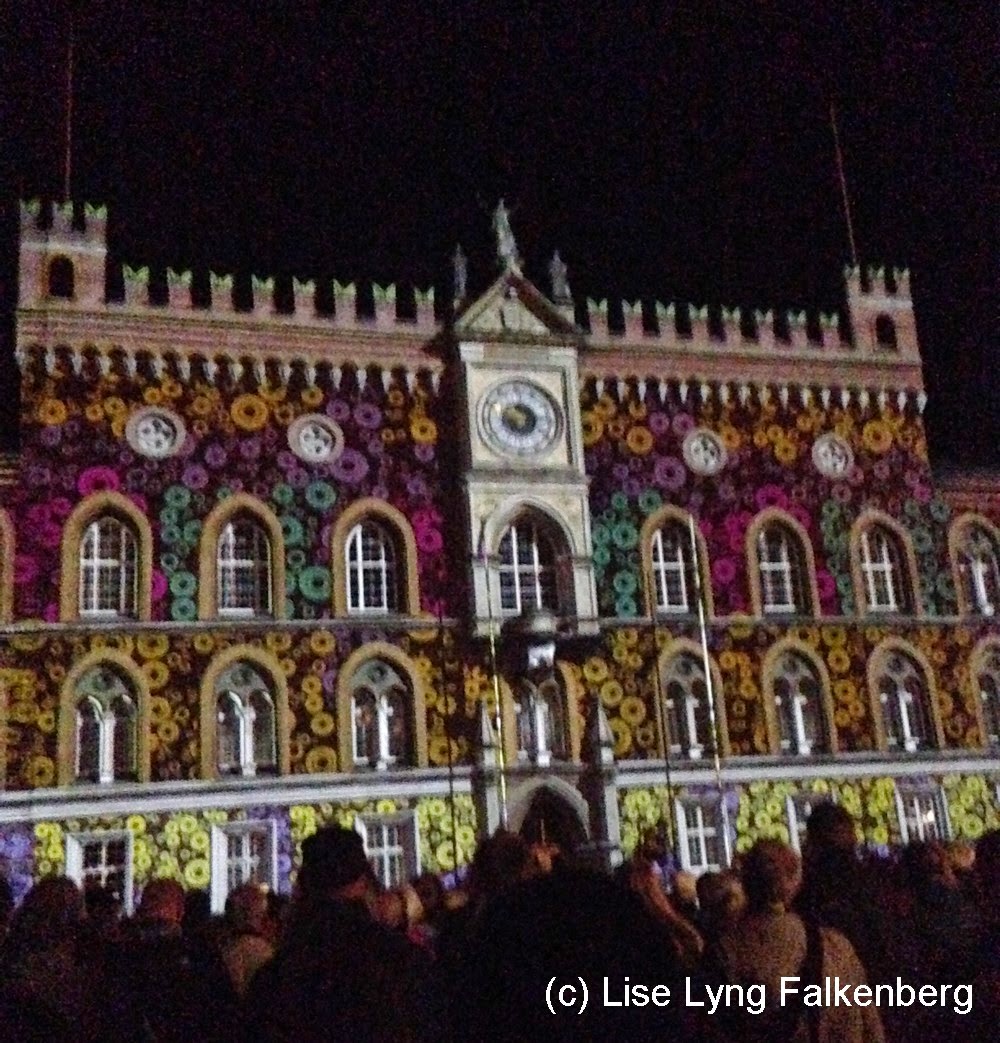 The lightshow by “We Create Magic” had been amazing last year with 3D photos and animations screened onto the town hall, making it come to life. At one point the town hall had been smashed by a giant and at another it had sprouted legs and walked away. I had never seen anything like it, it was pure magic, so although the performance was at 10.30 p.m. with no public transportation, I had persuaded my sister to take me. We arrived an hour early and found a good place to sit (most of the town square is standing room only) and at 10.30 p.m. some nameless musicians performed for 15 minutes, after which the show started. If you have never seen this kind of 3D light show before, you’d probably be impressed, but if you saw it last year, you wouldn’t. It only lasted 10 minutes instead of 30, where the town hall changed colours a few times, some small “clips” from “The Little Match Girl” and “Silly Hans” (“Jack the Dullard”) were shown and most impressively: Hans Christian Andersen himself went in and out through the walls. The whole thing ended with a single live trumpeter standing in the spotlight on top of the town hall, playing the song “Denmark, my Native Land” with lyrics by Hans Christian Andersen, the audience expected to sing along. It was rather kitschy, so I can only give the entire show 4 out of 5 stars: **** 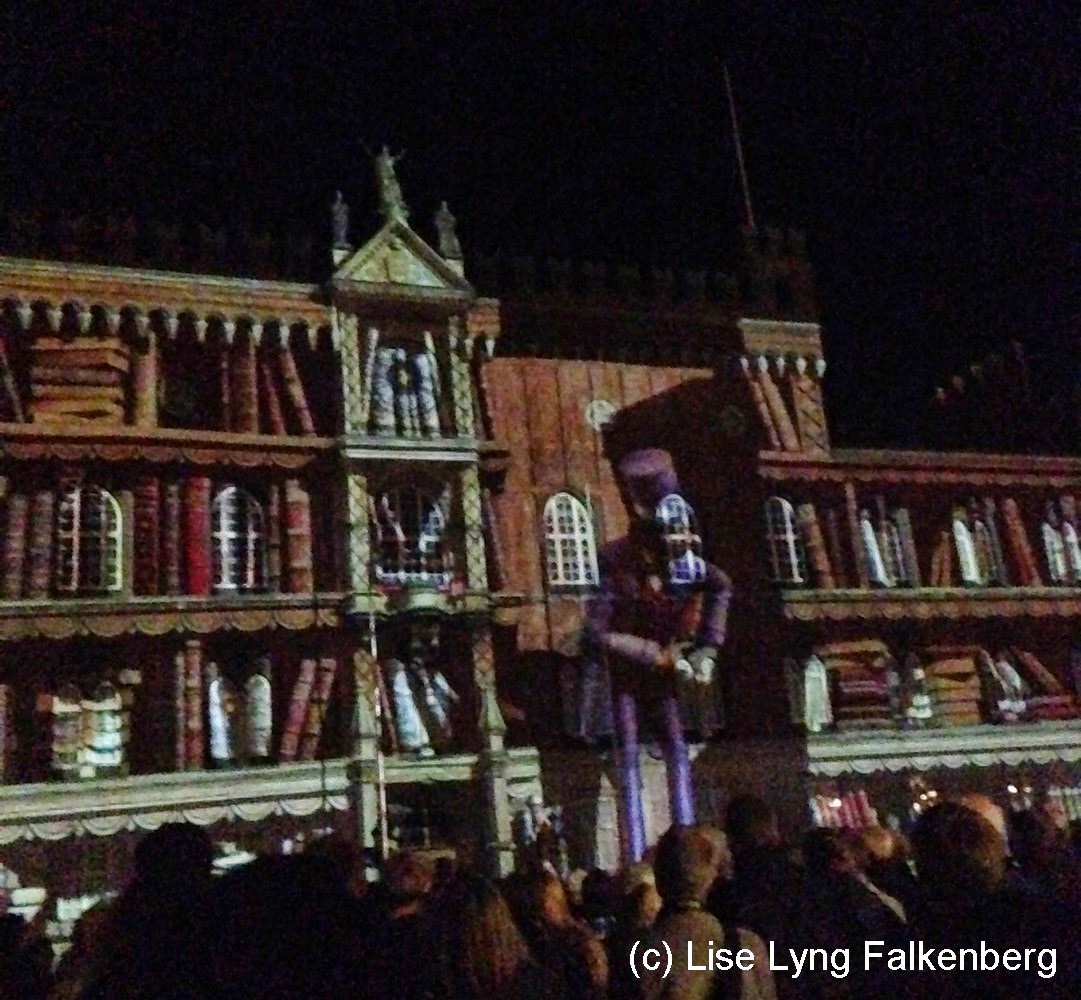 Luckily the Pink People street theatre was as good as last year. Once again the stereotypical Pink People marched all over town from one venue to the other under the strict guidance of a pink policewoman and stopping from time to time to applaud the shops and the pedestrians. I only watched them perform as a choir this year, though, as I was unable to attend their theatre shows, but they were still amazingly good. This year it was the transvestite, who impressed me the most, though, as he was hilarious. 5 out of 5 stars: ***** 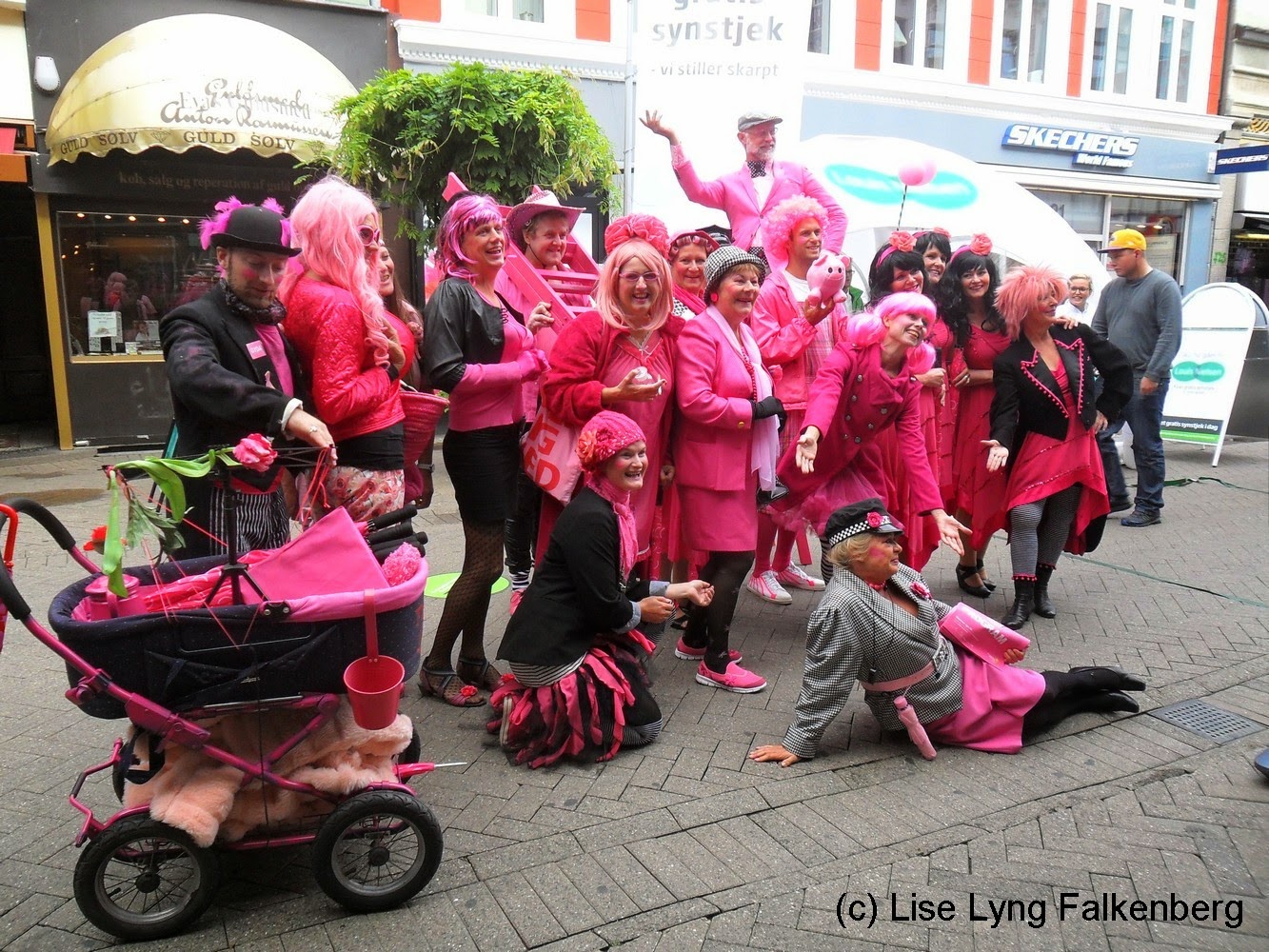 My “replacement” 3, the 3D street art by Leon Keer, was very impressive as well. Keer did a painting of The Little Mermaid, and I saw the work both in progress and as a finished painting. The 3D effect was amazing, so when you stood on the marked viewing point, the figures just popped up from the street. Again 5 out of 5 stars: ***** (on the left photo you can see the artist Leon Keer standing next to his painting).

Despite the lack of transportation, I managed to catch five other events. One of the best was the “HCA’s Stories”, which were animated short films with laser and smoke effects, but I only managed to see the daytime show, as I couldn’t get to the “darker” evening screenings for grown-ups. Another great thing was the “H. C. Andersen bus and train storyteller raid” where storytellers raided busses and trains during daytime and told Andersen fairy tales. I managed to hear “What the old man does is always right” and I truly enjoyed it. Very enjoyable was the Habengoods Street Stomp too, where the Habengood boys played songs and beats on everything but drums! Very funny and talented. I’ll give them as well as the storytellers and the short stories 4 out of 5 stars. 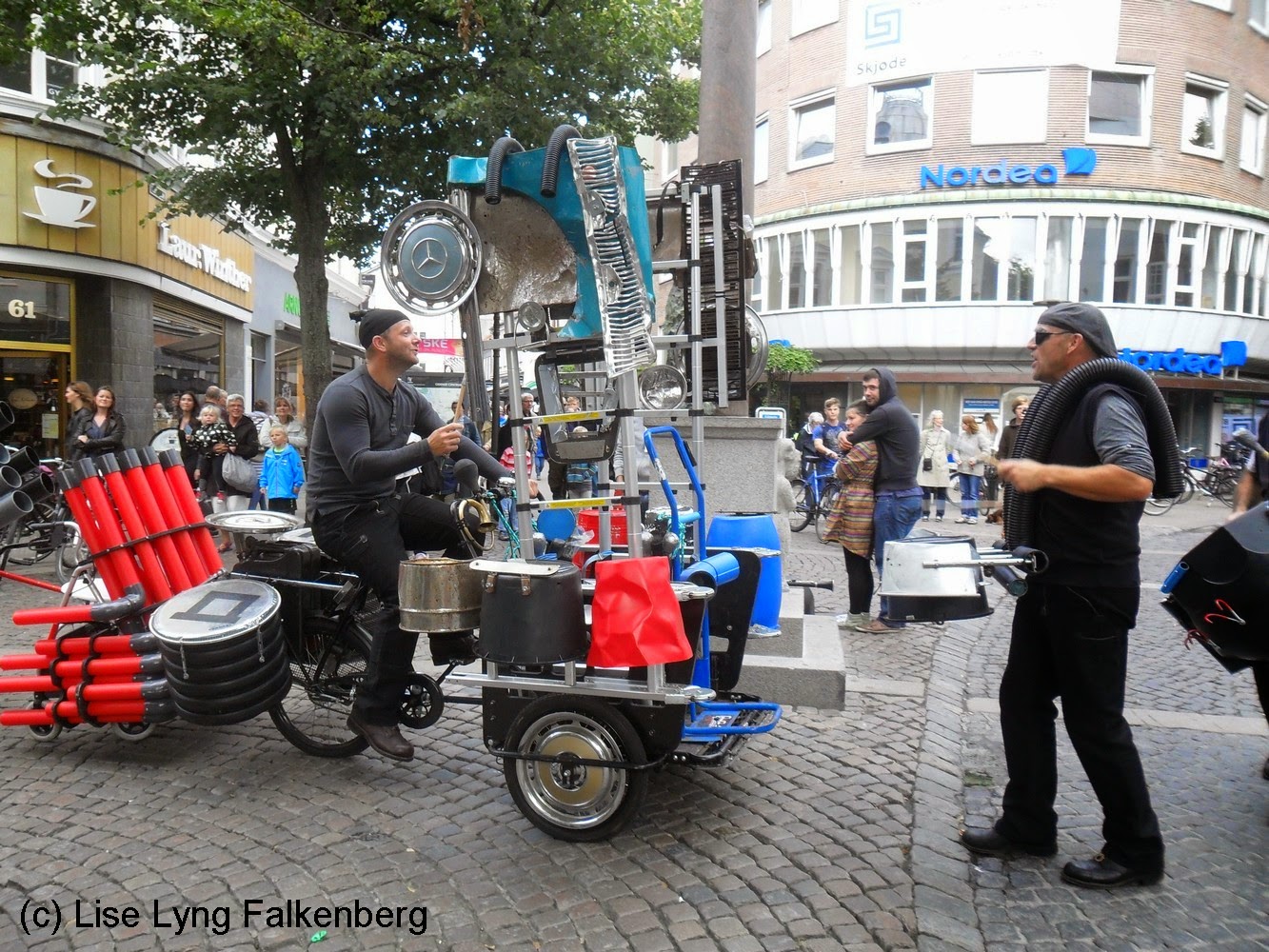 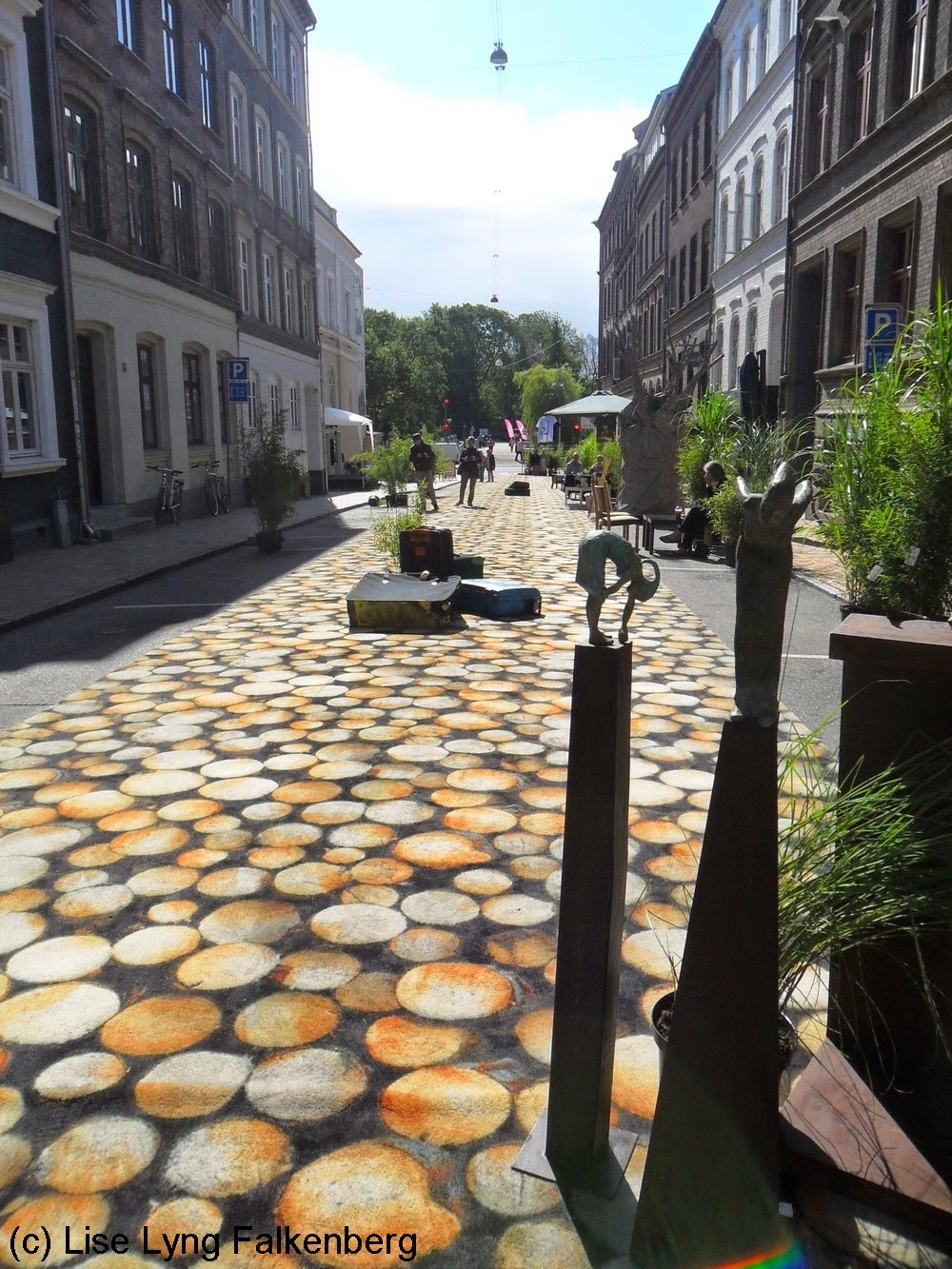 I would like to point out that there was a lot of shows and performances I would have loved to see, but they were all during the evening, so I couldn’t go. I’ve heard amazing things about “The Nightingale” shadow show, “The Little Mermaid” international artists show. The outdoor theatre play “Ole Lukoeje” (“Mr. Sandman”) and the ballet “My home is the Universe”, but unfortunately there was no way I could get to them. All in all there were not as many different shows and events like last year, though, as last year there were 270, this year there were about 60, which were repeated over and over again several times a day, each day. On the other hand, most of the events this year had something to do with Hans Christian Andersen. They hadn’t last year. To sum up: I didn’t find the festival(s) as interesting as last year, but it was okay except for the lack of public transportation. So dear festival makers and public transportation planners, please get together and sort this out before next year!


In my review of Odense Flower Festival last year I wrote: “It is no secret that I've been very disappointed in the Odense Flower Festival the past 4 years and that I had thought of boycotting it this year. In the end I didn't, but now I wish I had! In fact, this year the festival reached a new low, which I thought would be impossible!” 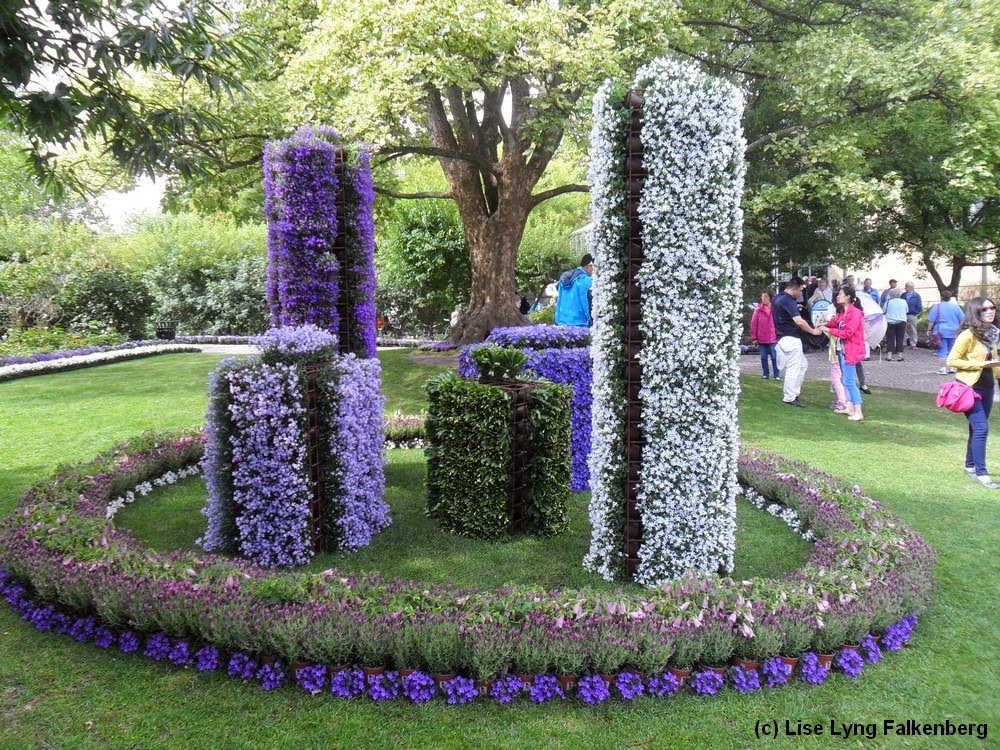 This is a very fitting description of this year’s Flower Festival, except now it’s 5 years instead of 4. It is such a shame as the festival started out as a true flower fairy land 10 years ago with imaginative floral sculptures everywhere, but like other of Odense’s famous festival (especially the annual Harry Potter Festival), the magic has been replaced by greed. Let’s face it: Odense Flower Festival is no longer about giving the visitors a look into the amazing world of flower art and sculptures, but about nursing schools selling as many flowers as possible. 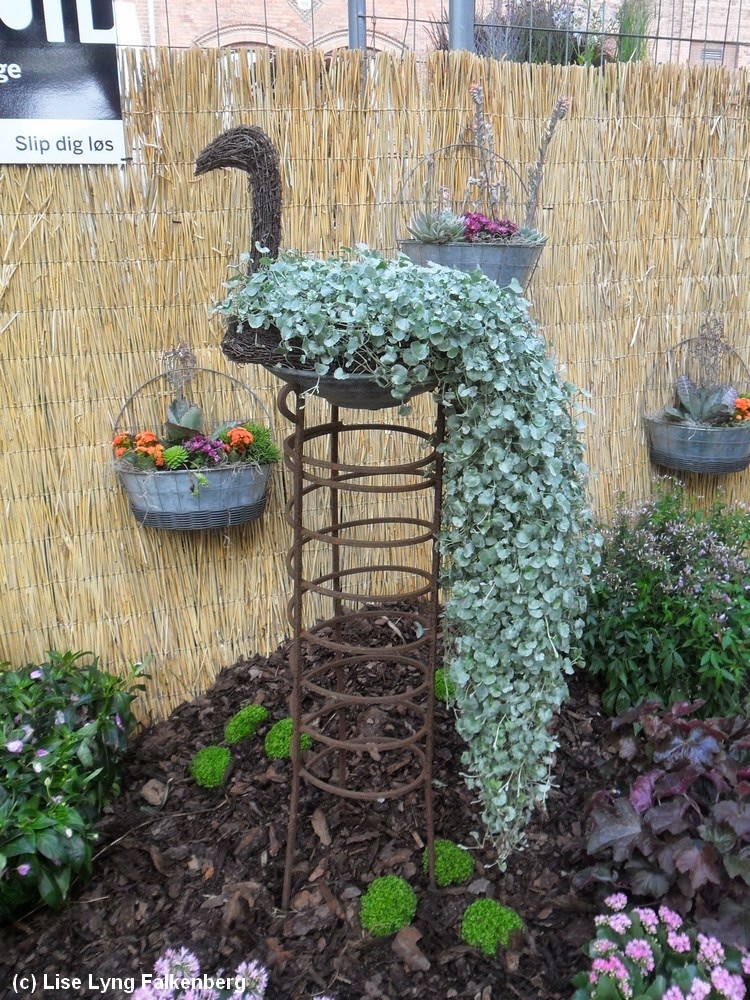 It was a small Flower Festival this year, as the exhibited flowers were mostly concentrated around Lotze’s Garden, Brandt’s Art Gallery, Greyfriars Square and the town square called Flakhaven. This year the theme was “The most beautiful garden in Denmark”, so in the town square nursing schools had just put up big banners with photos of Danish castles and manors and placed flowers beneath them. 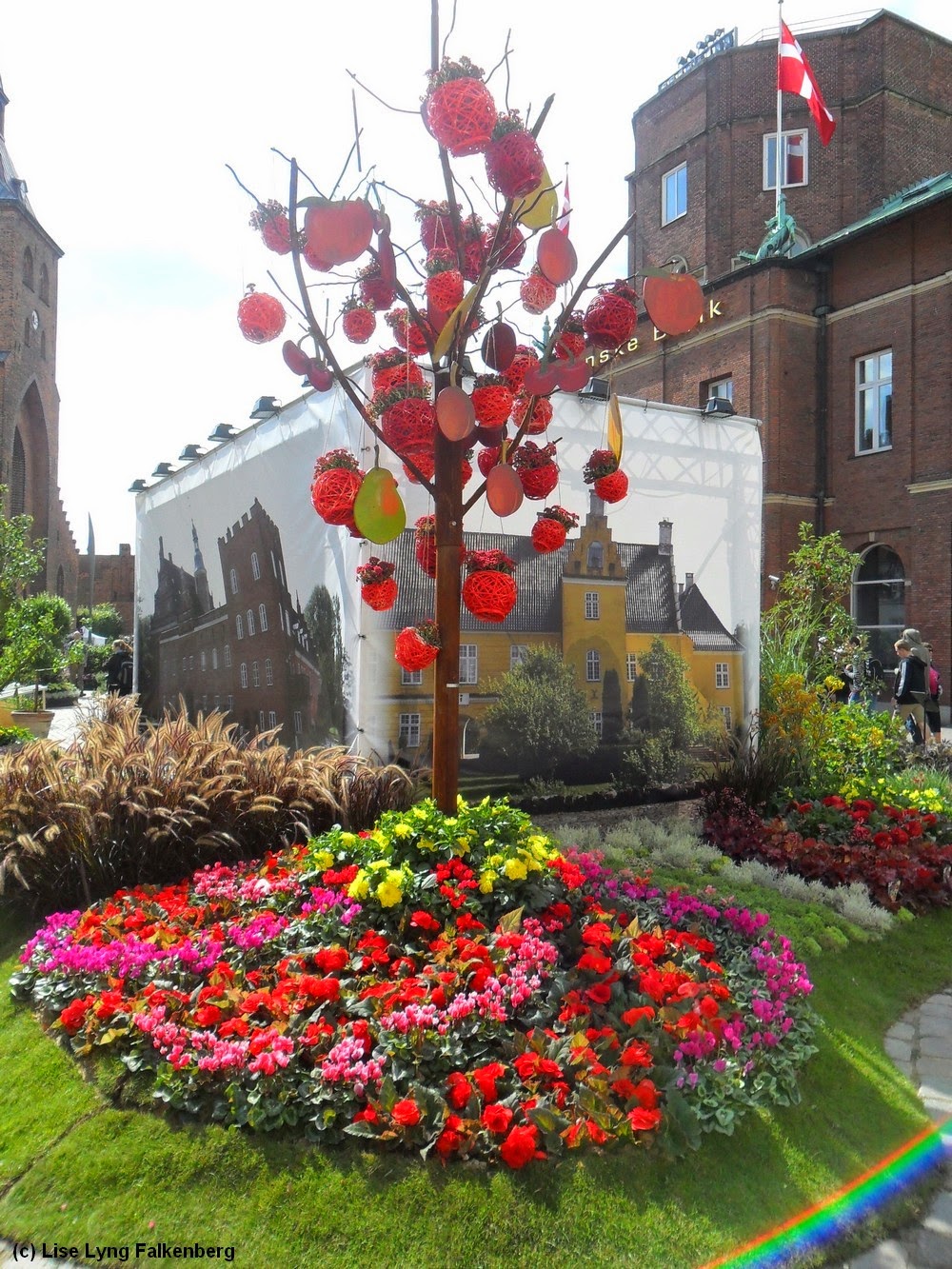 In Lotze’s Garden they had simply reused the sculptures from the past many years and at Brandt’s Art Gallery many of the exhibited items had nothing to do with the flower festival, but were leftovers from an art exhibition. Among them were some amazing-looking trees. 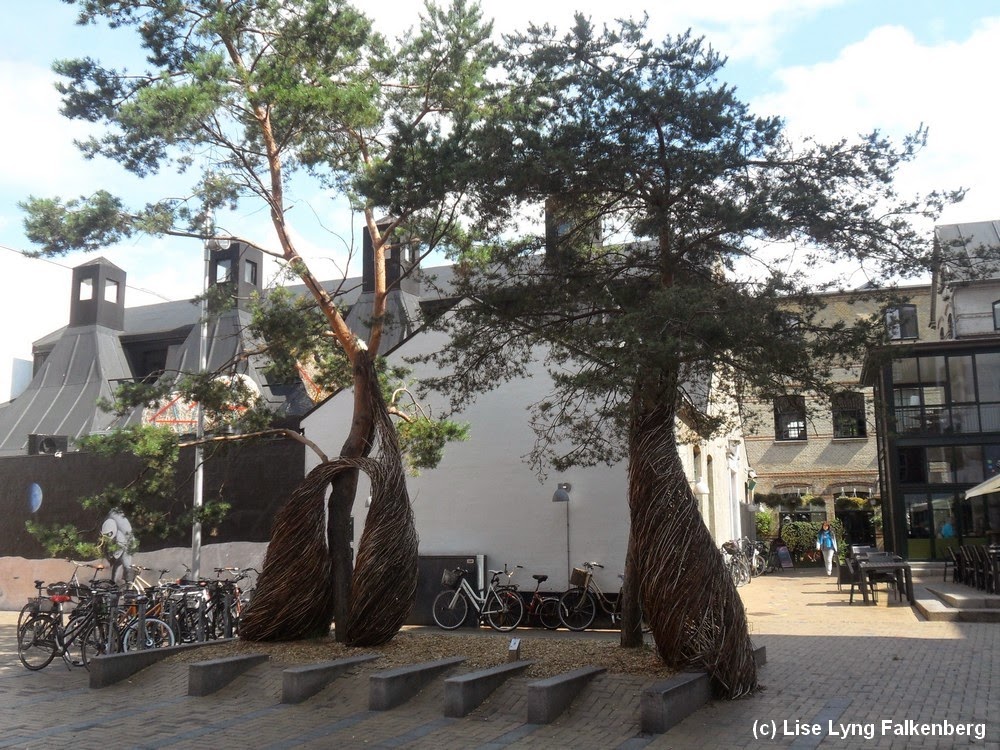 There were a few free concerts at the town square during the festival, one of them by the Danish band Tankens Bager (Baker of Thoughts) where my friend Claus is the singer, songwriter and guitarist. I went to see him and had a nice evening with his sister and the rest of his family and that was the festival highlight for me this year. 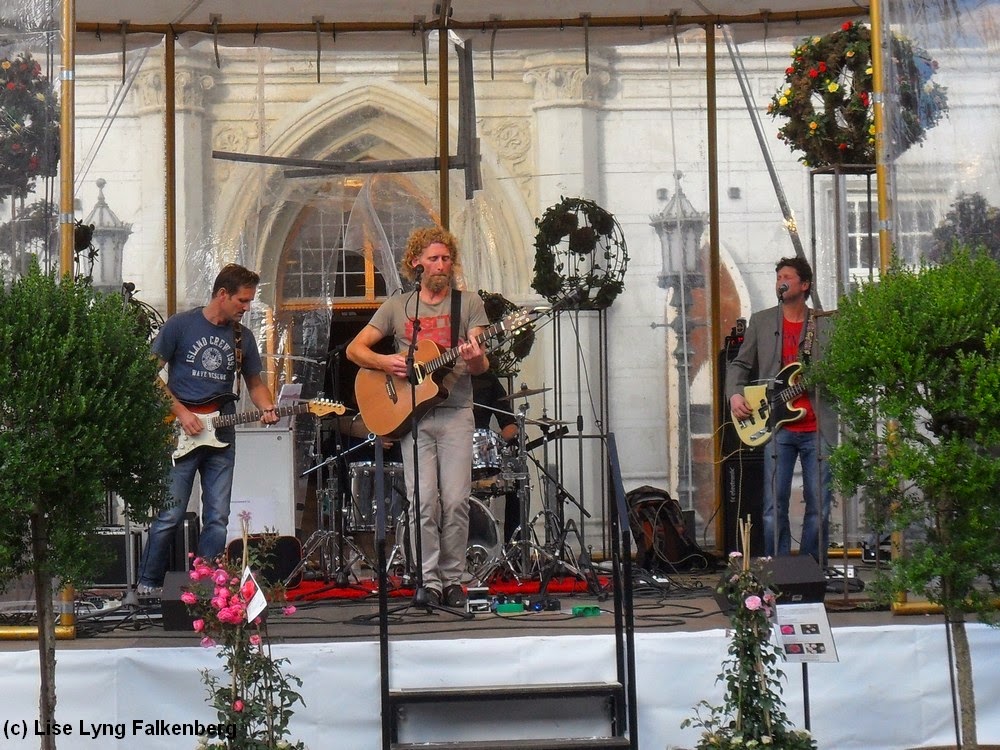 Last year I ended my review by writing: “I have to remember to boycott the exhibition next year. I know I keep hoping that Odense Flower Festival is going to be restored to its former glory, but after five miserable years, I guess I have to realise that I hope against hope.” Now I’ve hoped for six years and this time I give up. I’m not going to visit Odense Flower Festival next year, so feel free to regard this review as an epitaph!