You are no longer allowed to buy the Bible. Or certain plays by Shakespeare. Or some of the works by Stephen King, Anne Rice and J. R. R. Tolkien. Why? Because PayPal said so!

As of today, ebook distributors who use PayPal (such as BookStrand, Smashwords, AllRomanceEbooks) are no longer allowed to sell books containing types of erotica that their payment processor PayPal doesn’t like. Otherwise PayPal pulls the plug on them. So what types of erotica would that be, you ask? Nasty types, of course, or more precisely bestiality, rape, incest and underage erotica. Well, that certainly is nasty, you say? You think it’s a good thing then, what PayPal is doing? No, it isn’t. Because this, my friends, is censorship.

Censorship is never good. Never ever. If you don’t want to read a certain book, then don’t. Nobody’s forcing you to buy or read books that you don’t like, because you have the freedom of choice. But now PayPal is forcing you to refrain from making that choice. In fact, the payment processor is now taking away your right to think for yourself.

I wonder if PayPal has realised that by preventing readers to buy books containing bestiality, rape, incest and underage erotica, they have banned books like Paradise Lost, One Hundred Years of Solitude, The Bible, Ulysses, Story of O, American Psycho, Slaughterhouse Five, Sophocles’ Oedipus, Ovid’s Metamorphoses and several Shakespeare plays just to mention a few. So now Shakespeare, James Joyce and the Bible are no good for us? They are abominations that ought to be banned? I don’t get it. I really don’t. If PayPal had been around earlier, most of our literary treasures would never have seen the day of light. Shame on you, PayPal, shame on you!

Some will undoubtedly argue that it’s up to PayPal who they want to do business with, but with a corporation as big and powerful as PayPal I don’t agree. PayPal almost have a total monopoly of online money transactions and thus the power to put a stop to free speech. It is a scary thought that our right of freedom of expression is now controlled by a payment processor!

I’m not stupid, though. I’m sure that PayPal is going to turn a blind eye to Shakespeare and the Bible, letting them survive, but in a way I hope that book distributors are going to pull ALL the titles in question off the market. That way more PayPal users would come to realise just how horrible the idea is to have a payment processor censoring the book industry. I hope you’ll join me in demanding PayPal to back off or else we’ll pull the plug on them. All 350 million of us! Please, sign the petition against PayPal censorship: http://www.thepetitionsite.com/7/stop-internet-censorship
at February 27, 2012 1 comment:

The Woman in Black 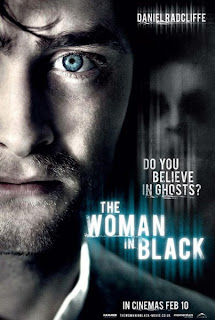 Director James Watkins has taken on Susan Hill’s 1983 novel “The Woman in Black” and made quite an efficient horror film out of it. The novel has already been made into a successful television film and a stage play, that is the second longest-running in the history of London’s West End, and now good old Hammer Film Production has made it into a film. To me Hammer equals horror. It makes me think of their many films about Frankenstein, Dracula and the Mummy not to mention their “Hammer House of Horror” series. But where the previous productions all had an air of kitschy B-movie about them – that was their charm so to speak - “The Woman in Black” is a 100% quality film.

In many ways the film version of “The Woman in Black” is a classic Victorian ghost story, although it takes place in the Edwardian era. It tells the story of the lawyer Arthur Kipps (Daniel Radcliffe) who lives in London with his four-year-old son as his wife has died after childbirth. Kipps has financial problems and is assigned to handle the estate of Alice Drablow who owned the desolate and secluded Eel Marsh House, where she had lived with her husband, son Nathaniel, and sister, Jennet Humfrye (Liz White). The house is situated near the small town Crythin Gifford, but it is completely cut off from the mainland at high tide, as it is surrounded by marshes. When Kipps arrive at Crythin Gifford, the locals are very hostile and try to make him leave immediately. Only the innkeeper’s wife Mrs. Fisher (Mary Stockley), the landowner Sam Daily (Ciarán Hinds) and his wife (Janet McTeer) show Kipps some kindness. While sorting through Mrs Drablow's papers at Eel Marsh House, Kipps experiences an increasing amount of terrifying noises and chilling events and gradually he comes to realise that the house and the town is haunted by an evil spirit that takes its revenge by killing young children.

The plot of the film is rather transparent, at least I figured it out in less than fifteen minutes, but still the story is a creepy, scary, chilling one with many a shock in store. Not for the fainthearted for sure as there is a reason why it is rated “suitable only for 15 years or older”. The film makes heavy use of jump scares, though, which is a bit annoying, as it isn’t needed. The story itself is chilling enough on its own, but I suppose Watkins has wanted to make sure that the audience’s blood pressure is raised most of the time. The film also has a rather dodgy ending where Kipps seems unsuitably happy about the way things turn out. Here scriptwriter Jane Goldman has made a serious a faux pas by turning the tragic ending of the novel into a very strange, happy one where Kipps’ joy totally contradicts the whole premise of the story.

“The Woman in Black” is Daniel Radcliffe’s first film after his decade of portraying Harry Potter and that is a bit tongue-in-cheek. Why? Because in the 1989 television version of “The Woman in Black” it was Adrian Rawlins who played the haunted lawyer and in the Harry Potter films Rawlins was - of course - James Potter, Harry Potter’s dad. In a ghost story about parents and sons, it is a bit funny to let Radcliffe take over his film-father’s old part. I haven’t seen the television version, but I’m pretty sure that Radcliffe outshines his “dad”. Radcliffe is what? Twenty-two? In the last Harry Potter film he was supposed to be seventeen and now in “The Woman in Black” he’s a thirty-something family man and he’s convincing. When watching “The Woman in Black” you don’t think about Harry Potter, you don’t think about age, you are just wholly absorbed in the portrait that Radcliffe paints of Arthur Kipps. Because don’t get this wrong. No matter how chilling “The Woman in Black” is, it is not just a ghost story, it is also a one man show. The film IS Radcliffe as all the other actors are just necessary but almost invisible supporting cast members and you don’t really remember their performances afterwards. You do with Radcliffe. Despite his young age, he is an extremely talented actor, in my opinion one of the best in the world at the moment, and I hope to see a lot more from him in years to come.