Last summer, my daughter and I went on a trip to London. It was my daughter’s first time there, so I enjoyed showing her around, but one thing was quite new to both of us: the Warner Bros. Studio Tour London – The Making of Harry Potter (what an awful and awfully long name!). 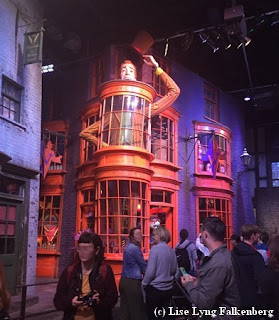 For years and years, I have written about Harry Potter, the books, the films, the festivals, and the stars and since 2012 I’ve been asked repeatedly to visit the Warner Bros. Studio Tour London – The Making of Harry Potter. I haven’t been able to go before, as between 2013 and 2016 I had surgery three times and each time I had to go through rehabilitation training for almost a year afterwards. Eventually, in 2017 both the surgeons and I had to realise that I am never going to get better, so if I want to see and do the things that I dream of, I have to do them with crutches, painkillers and a lot of aid and pre-planned resting-time. 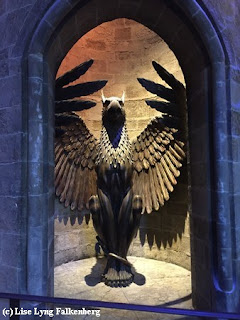 In any case, with the UK on the brink of leaving the EU, I thought that I’d better see the Warner Bros. Studio Tour London – The Making of Harry Potter now as nobody knows how easy it is going to be in the future for us EU citizens to visit our dear UK friends, who have sadly turned their backs on us. It took a bit of pre-planning though, as this is a must when going to the Warner Bros. Studio Tour London – The Making of Harry Potter. Here all tickets have to be pre-booked and furthermore, although it is called Warner Bros. Studio Tour London it is not situated in London, but in the Leavesden Film Studios near Watford, England, where the Harry Potter films were made, so you have to find out how to get there. If you don’t have a car, you can go either by train or like we did, by bus. We got tickets in advance through Golden Tours London, which provided us with a bus ride to and from the studios as well as a fairly speedy entrance and three hours at the studios. 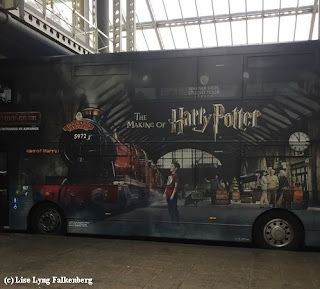 The bus left from the Fountain Square building across from Victoria Station in London and although it looked easy to find on a map, it was not. We found the building alright and also the Golden Tour bus stops in front of it, but the busses to the Warner Bros. Studio Tour London – The Making of Harry Potter did not depart from there. We asked both the bus drivers and people working in the Fountain Square building for help, but nobody seemed to know from where the Harry Potter busses departed. Eventually we found it though, as it turned out that we were go inside the building, cross the indoors square and then the bus stop was on the other side, more or less inside the building! 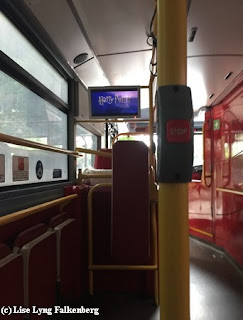 Upon entering the bus, we received our entrance tickets to the Warner Bros. Studio Tour London – The Making of Harry Potter as well as a note saying when to be back at the bus in Watford. The bus itself was a nice double-decker bus that screened Harry Potter films all the way from London to Watford, but as the trip only lasted fifty minutes and not two hours like it said on the ticket, we only got to see the middle part of “Harry Potter and the Chamber of Secrets”. We didn’t complain, though, as we had more time at the studio tour this way. 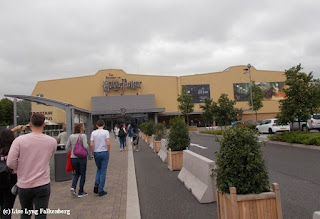 Upon our arrival, both the entrance hall and the Studio Café were awfully crowded, but once we queued up to enter the tour itself, things went quickly and smoothly. We waited less than ten minutes to gain entrance, as the staff let in about a hundred people at a time. First, we watched two short films in two different rooms, the first telling about the Harry Potter phenomenon and the second about the studio tour as such. After that we were let into the Great Hall where we were only allowed to stay for a few minutes, before we were bundled off into the rest of the tour, where we could walk around freely and see things in our own pace. 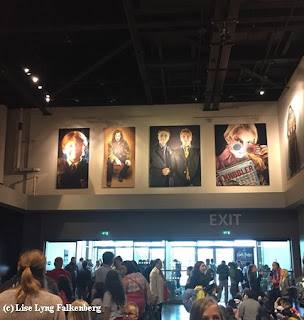 A friendly word of advice if you are disabled like me, but not in a wheelchair: there are nowhere you can sit down during queueing, during the screening of the first film or in the Great Hall, so be sure that you are able to stand up for at least 15-20 minutes at a time. We were several people with crutches when I was there, and all of us had a hard time standing up, especially during the first short film (you are in a regular theatre with seats for the second one). 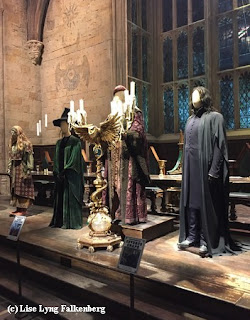 It was a bit disappointing that we weren’t allowed to stay in the Great Hall for longer than a couple of minutes, mainly because it is one of the best sets on the entire tour but also because you don’t have enough time to both listen to the guide and take pictures. You have to decide which is most important to you. After the Great Hall the guide leaves, so you can spend as much time as you like on the rest of the tour, but it was very crowded with hardly any places for disabled to sit down. 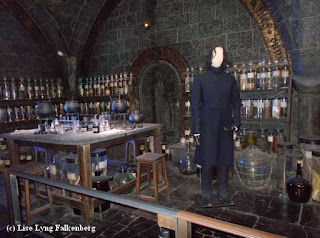 When that is said, there was so much to see and do. There were loads of costumes and props and even a few sets and we got to appreciate the fine attention to detail that went into making the films off the books. We even got to see behind the scene so to speak and learn how the special effects were made, how Hagrid could be that tall, how the brooms were flying, how the creature effects worked and much more. Visitors could even get both photos and videos of themselves flying, if they wanted, but that was rather expensive. 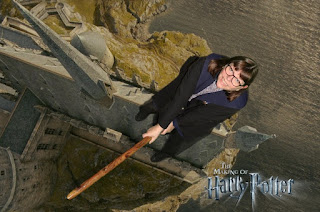 We also visited Harry Potter’ childhood home in Privet Drive and Platform 9 ¾ and those willing to pay extra were filmed on the Hogwarts Express too. We saw the Knight Bus, the Potter family’s cottage in Godric’s Hollow and beautiful models and drawings at the Art Department, but although all of these things were great, I was a bit disappointed, because everything was helter-skelter, somehow, and arranged a bit at random. 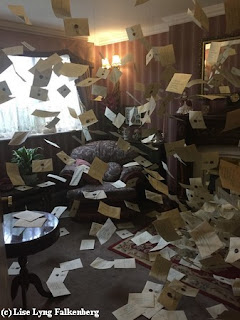 I guess what I missed the most, though, was the feeling of being inside Harry Potter’s world instead of just seeing Hermoine’s gown from the Yule Ball or Dumbledore’s Pensive tucked away in a cupboard. I only got the “on set” feeling three times during the tour and that was in the Great Hall, in the Forbidden Forrest and in Diagon Alley. They are all large sets that you can walk into - the Forbidden Forrest was even a bit scary with the giant spider Aragog and everything – but somehow, I don’t think that was quite enough, the very high ticket price considered. Or maybe I just expected too much, having waited so many years to be able to go. 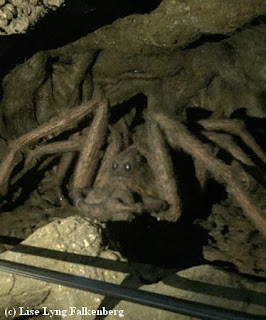 Halfway through the tour, we came across the Backlot Café, a large, ugly, and cold cafeteria-area with a view of the Knight Bus and Privet Drive. I still wonder why this area is so clinical and ugly. especially as it is the only one big enough to seat the many visitors, as the Studio Café in the lobby fills up quickly due to its size. In any case, we had butterbeer at the Backlot Café, horribly overpriced sandwiches and a few snacks. 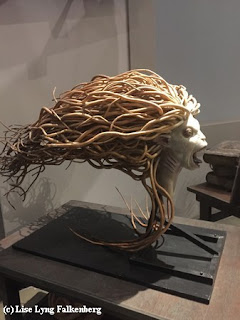 On the other side of the backlot we found the Special Effects/Creature Effects area. Along with the Forbidden Forrest and the Diagon Alley sets, to us this was easily the most interesting on the tour. At least we spent a lot of time playing with the animatronics and learning about stuff like merpeople, thestrals and dragons and we also saw models of Nearly Headless Nick’s head and George without his ear. 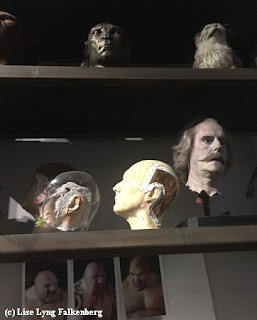 Almost at the end of the tour, was the big, beautiful Hogwarts Castle model. Here people gathered to relax and meditate, so although it is a fairly large room with many people in it, it was also quiet. The light ranged from dark (day) to deep dark (night) as we moved around the castle and the details as far as we were able to see them in the dim light, were just amazing. I could easily have spent much more time there, had I been able to sit down, and had the place been less crowded. 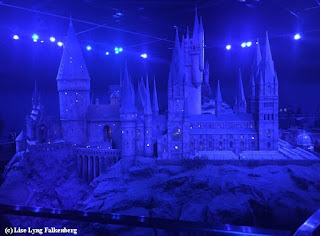 The last room before the tour ended in the giftshop was one filled with the wands of all of the actors in the eight films. Here you were encouraged to search for the wands of your favourite actors (you couldn’t see the wands themselves, just the wand boxes) and if you find Chris Rankin’s (the actor playing Percy Weasley) and send a photo to him on Twitter of yourself next to his wand box, he says that he’ll retweet the photo. I’m still waiting, though, so maybe it is only the lucky few who get a retweet! 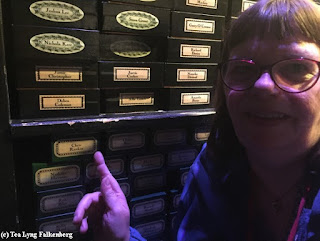 Once you end up in the giftshop, the tour is over and there is no going back. The giftshop was one of three (the two others we encountered along the tour), but I found all three shops rather lacking. At least you couldn’t buy a single postcard from the Warner Bros. Studio Tour London – The Making of Harry Potter, let alone a souvenir guidebook or anything about the tour. The only thing there was Harry Potter merchandise that you can buy online everywhere, nothing specific for the tour. 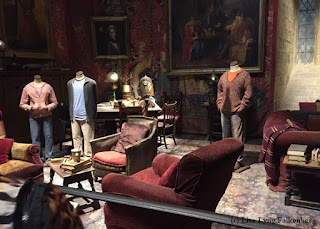 I ended up buying a wand for my collection for a whooping £25 and that was a cheap one! I really wanted a Ravenclaw scarf and some WWW sweets too but unfortunately, the giftshops only sell Honeyduke’s sweets and all their Ravenclaw scarves were blue and silver like in the films, despite the colours of Ravenclaw being blue and bronze. 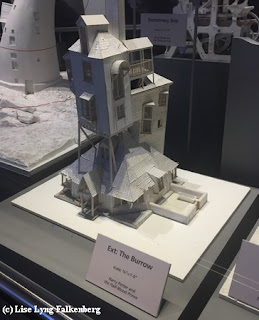 Oh, well, at least we got back to the bus in time, but we could easily have used an extra hour or more in the studio tour buildings. On the other hand, it was great to relax on the bus ride back to London, although they screened the same part of “Harry Potter and the Chamber of Secrets” as on our way out. 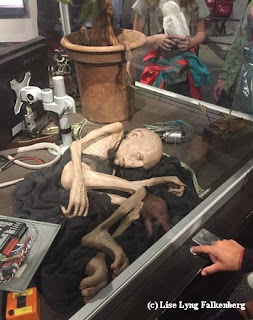 To sum up: The Warner Bros. Studio Tour London – The Making of Harry Potter is interesting if you are a Harry Potter film nerd, but it’s not a place for small children as they would be bored. You should take your time, 5-6 hours at least, and bring plenty of cash as it is one expensive place. Ticket prices are currently £41 for adults and £33 for children and you need at least three times as much in pocket money if you want to buy photos and videos on the tour, have butterbeer and lunch while you are there and shop a bit in the giftshops. To be honest, I think the prices are way too high, but as long as people are willing to pay them, I guess they won’t be lowered. All in all, I found the Warner Bros. Studio Tour London – The Making of Harry Potter a nice place to visit, although it didn’t quite live up to my expectations and it was way too expensive. Because of this, I can only give it four out of five stars: ****
at May 11, 2018 2 comments: