Last year the Harry Potter Festival here in Odense, Denmark, celebrated its 15th anniversary. Over the years, the festival has grown from being a small, local event organised by Odense Library for a handful of kids to a full-scale festival taking place all over town and lasting three days with 10,000+ visitors. But not anymore. 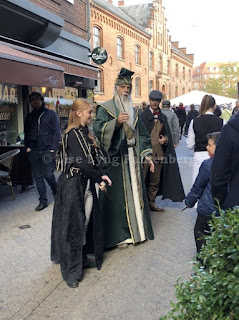 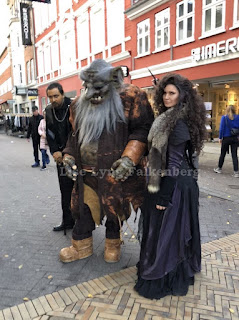 With that said, the festival still took place here in Odense, this time during October 18th-20th, 2018, but under a new name. Instead of the obvious choice, calling the festival “The Festival That Must Not Be Named”, the new festival name is “Magic Days in Odense” and as it is no longer a Harry Potter festival, it embraces everything magic from every fantasy universe possible. When you walk down the streets you no longer meet just the characters from Harry Potter like Dumbledore, Hagrid and He Who Must Not Be Named, but also characters from “Lord of the Rings”, “Game of Thrones” and “Narnia”. I for one met Mr. Tumnus! 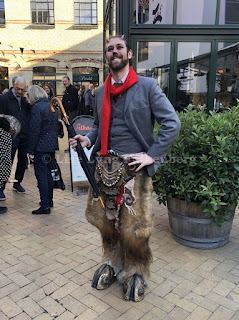 Still, it was clear that the festival had been planned as a Harry Potter Festival before Warner Bros. stopped the event makers from using the Harry Potter name. Thus, many of the activities were the same as previous years, but with new names. The Dursley home was now called the Jensen home, Madam Malkin’s Robes was called Madam Dorthea’s Robe Workshop, Honeyduke’s became The Sugar Fairy’s Candy Store, St. Mungos Hospital was St. Albani Infirmary, Diagon Alley was Elf Alley, Eeylps Owl Emporium became Feathers and Flying Owl Emporium, Ollivanders was Magic Wand Emporium, Flourish and Blotts was Magical Writings and Stationary, The Daily Prophet was Wizard Tidings, Borgin and Burkes was The Magic Second-hand Shop and finally Gringotts became Fafner Bank and the currency Galleons became Odinars. 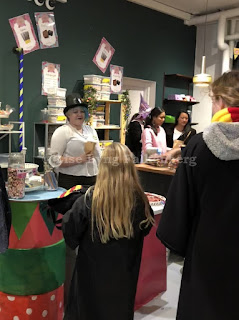 Quidditch was still the same, though, as quidditch was a real word long before Harry Potter and the sport has become a real-life-sport with international rules and everything. The ODEON film concert was also still associated to Harry Potter as it was “Harry Potter and the Chamber of Secrets™ in concert” performed by Odense Symphony Orchestra, but other than that it was difficult to find any of the old names and characters. 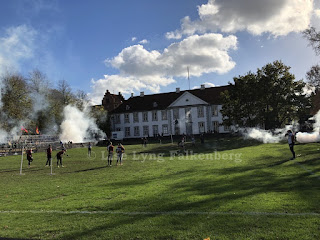 Of the many new things this year, I especially noticed three. The first one was what should have been the Weasley home but instead of a visit to the Weasleys, festival goers could now visit “The Pumpernikkel Family – a Magic Home”. It was still the Weasleys, though, down to Mrs. Weasleys charmed knitting and the clock that individually monitors each of the Weasleys whereabouts. 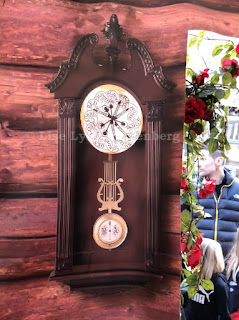 The second thing that stood out was the making of a new, Nordic wizarding school called Nordheim. Originally when the festival started now sixteen years ago, it was as Hogwarts where a few kids were able to attend. Over the years, Hogwarts grew and a couple of hundred students attended each year until 2010 where J. K. Rowling visited the festival. Up until then Hogwarts had been situated in Odense townhall, but that year Rowling used the town hall to read to a few children and have lunch with Odense’s notabilities, so Hogwarts was closed that year and remained closed every year since then. 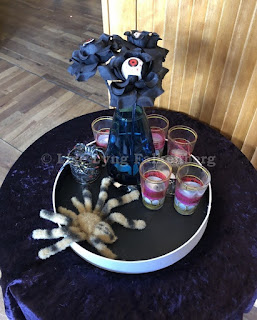 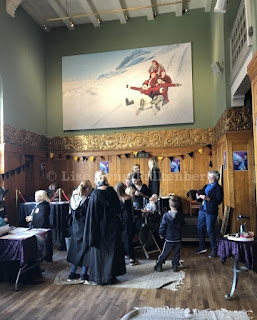 In some ways the houses of the Nordheim Wizarding Academy are similar to Gryffindor, Hufflepuff, Ravenclaw and Slytherin, although they have merged a bit, but what happen inside the walls of the academy I do not know, as this event was sold out in advance, but from what I can see in the programme, the students were to learn herbology, divination, runes, crystals, taming of monsters and how to use magic in battle. 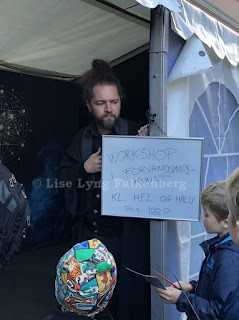 The third and final event that caught my eye was called “Theatre Magic”. It had absolutely nothing to do with Harry Potter, but still it was the best feature of this festival. Usually the title of “the best” goes to the Brandts 13 Museum during Harry Potter festivals, as the museum used to be the home of Madam Puddifoot’s Tea Salon, The Fat Lady, Professor McGonagall and an annual surprise that has ranged from the Prefects’ Bathroom over the Goblet of Fire to Fluffy the gigantic, vicious, three-headed dog. But now Brandts 13 is closed to the public as it has been turned into an art academy, so there is no tea, no surprise and worst of all no McGonagall (who is an old acquaintance of mine) anymore. Instead you could visit Odense Theatre where my sister knows the caretaker. Typical that she knows the local Filch, she is a Slytherin after all, whereas I am Ravenclaw. 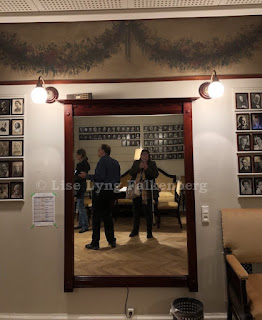 In any case, the visit to the theatre was quite exceptional as equipped with only a flashlight (or like us the light from my mobile phone!) you were sent into the dark basement under the theatre after having seen a short video about ghosts. You had to find clues in order to get out again and the hunt for clues brought us all over the theatre. First, we visited skeletons, monsters and very smelly fog in the basement where we saw the revolving theatre scene from below as well. We came through all kinds of wardrobes, workshops, prop rooms etc. on a backstage tour of the theatre. We even crossed the stage and it was interesting to see the theatre hall from the viewpoint of the actors. It actually seemed quite small although the theatre has three floors. We ended up backstage with the local “Filch” and he told us stories about the former theatre manager Helge Rungwald, who since his death in 1960 has haunted the theatre. He has been seen many times in the same spot on the balcony above the upstairs bar. We didn’t see him, though, but luckily we managed to get all the clues so we were able to get out of the theatre again. 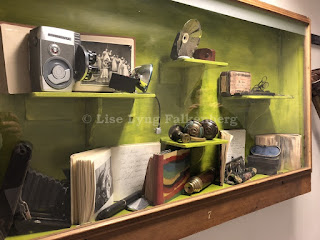 Although there was plenty to do at the festival as it consisted of about sixty different events, it was still approximately ten events less than during the Harry Potter Festivals. On top of it, it was a lot more expensive this year and furthermore many of the events and shops only took “real” money. If you wanted to try everything, you would have to use around DKK 1,700 (€228 / $283) in “real” money plus money for food and whatever you had to pay in different shops and workshops in Odinars. I was honestly a little shocked to find out that even to enter a shop, no matter if you bought something or not, you had to pay between 100 and 300 Odinars to get in as during the Harry Potter Festival days you visited shops for free, of course. Other activities during “Magic Days in Odense” cost up to 600 Odinars and even a glass of butterbeer cost 750 Odinars. In the bank you got 1,000 Odinars for DKK 50, so butterbeer was DKK 37,50 (€5 / $6,25) and it didn’t even taste like proper butterbeer. Anyway, all in all per person you would need perhaps DKK 2.500 (€336 / $416) to try everything at the festival, but then again you can’t try everything as there are age restrictions. At some of the events you had to be younger than fifteen to participate, at others you had to be over eighteen. 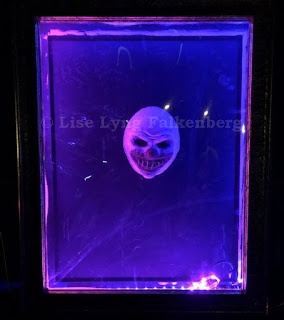 Furthermore, some events were sold out even before the programme was printed so you didn’t have a chance to participate unless you knew about the events BEFORE the programme came out. The sold out events were “The Magic Train” (formerly the Hogwarts Express), “Visit the Wizard College”, “Slippery Snake Slime”, “The School of Ghosts”, “Banquet at the Nordheim Wizarding Academy” and “ODEON – Film Concert”. 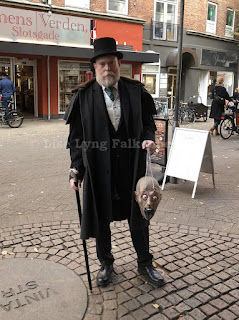 Doing the math, I realised that if every visitor tried everything at “Magic Days in Odense”, the festival would earn DKK 25 million (€ 3.4 million / $ 4,2 million), but of course it doesn’t. In fact, I think the festival only breaks even, as making such a huge annual festival is expensive. I have no idea if the festival is going to have the same number of visitors in years to come, now that it is no longer a Harry Potter festival, but I know that they can count me out. I’m a Harry Potter film nerd (not so much the books), so this is the end for me. It is really strange to write after all these years, but I won’t be back next year. 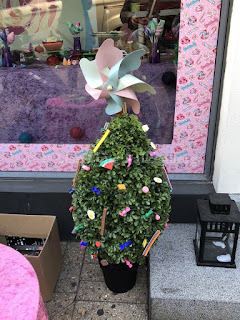 Visit “Magic Days in Odense” in 2019 if you like everything magic and has enough money to spend. I won’t be there, though, as I can find better use for my money. So bye-bye, annual festival. I still think “The Festival That Must Not Be Named” would have been a better name.