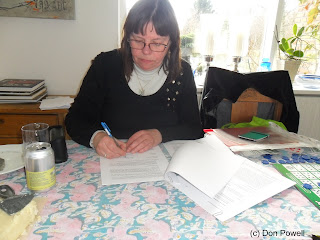 Don Powell and I have signed with Omnibus Press. You can already pre-order the hardcover edition of Don's biography on Amazon.co.uk:
http://www.amazon.co.uk/Look-Wot-Dun-Powell-Slade/dp/1783050403 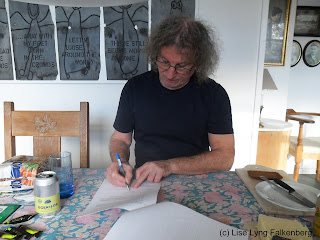 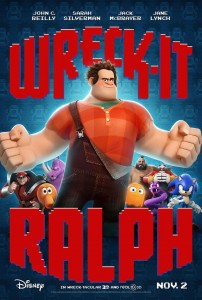 Disney's newest computer-animated film, "Wreck-It Ralph" directed by Rich Moore, finally reached the Danish cinemas in February and during winter break I took my 14 year old daughter to see it.

In Litwak's Arcade the video game characters come to life at night. In the video game "Fix-It Felix Jr." Ralph (voiced by John C. Reilly) is the villain, but he wants to win a medal and become a good guy. Ralph now enters the shooter game "Hero's Duty" where he encounters the tough Sergeant Calhoun (Jane Lynch) and gets to fight Cy-bugs. He gets hold of a medal and while fighting a Cy-bug, he flees to a kart-racing game called "Sugar Rush". Here he meets the little girl Vanellope (Sarah Silverman) who wants to participate in a race, but King Candy (Alan Tudyk) won't allow it because Vanellope is a glitch. While Ralph tries to help Vanellope, Fix-It Felix (Jack McBrayer) teams up with Sergeant Calhoun in order to find Ralph and destroy the Cy-bug that is threatening to take over the games in Litwak's Arcade.

That's the plot in "Wreck-It Ralph" and I must admit that the film is beautifully animated and contains a lot of inside jokes and references to famous video games throughout the 108 minutes that it lasts. It's a funny film, but not ha-ha funny, and personally I only laughed out loud once, and that was because of the Oreo-guards outside King Candy's palace. I don't think my daughter got it, as she has never seen "The Wizard of Oz". Another nice detail was Ralph and his fellow villains leaving the Pacman game, but that's about it.

You can't really say that there's anything wrong with the film, but because of the hype, both my daughter and I had expected something else. I guess what we had expected was seeing Ralph in a lot of other games and in "real" games as well and not just 3 made-up ones. Because of that we both agree that the film "only" deserves three out of five stars: ***