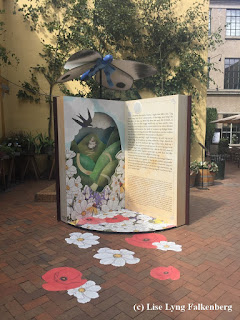 Since 2013 we have had the H. C. Andersen Festivals the week after the Flower Festival here in Odense, Denmark – the hometown of world famous fairy tale writer Hans Christian Andersen (and me). This year the festivals took place between during August 19.-26. and like previous years, private businesses funded the biggest part of the festivals, so – as I usually point out, it was all rather commercial. 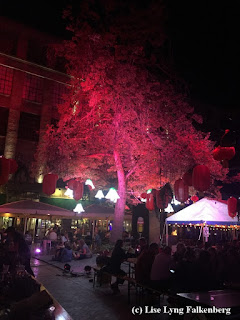 The makers of the H. C. Andersen Festival are also very good at boasting. Like last year, the programme claimed that the festivals contained 500+ events, but if you took a closer look, only around 130 were different events, which were then repeated again and again. Some of the events were for children only, others for adults only and almost half of them was not free of charge, so you had to buy tickets in advance. The average ticket cost between £10 and £30, so you had to choose wisely. I did what I always do: only attending events that were free of charge, so the most interesting concerts, theatre plays, and other performances were out of my reach. Still, I managed to see around fifteen events, enough to make my own Top 5, which looks like this: 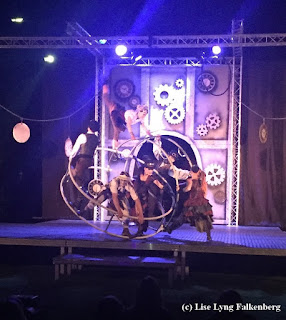 1. On a clear first place I have “Beyond Time”, a steam punk show with Polish artists. Although the start was a little slow, the 1 hour show just flew by. It was amazingly creative, funny and talented, a combination of mime theatre, dance and modern circus, not to mention the guys in charge of the music, singing and sound effects. Amazing! Five out of five stars: ***** 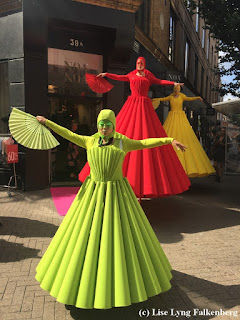 2. The Rainbow Ballet was almost as good. The German street performers Dulce Compania went through the streets using stilts and segways and dancing a gracious ballet inspired by Oscar Schlemmer’s “Triadic Ballet”. Five out of Five stars: ***** 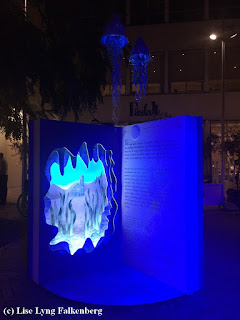 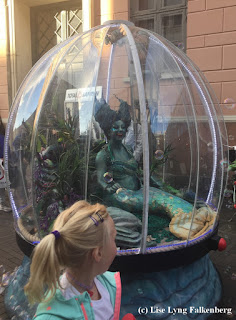 4.The “Ocean Sphere”, which basically was a mermaid in her own world in a magic globe on wheels. The concept was created by the Belgian artist Anne Vandelanotte and it was beautiful to behold. The mermaid waved at and interacted with the people she passed while driving around in the streets and if you pushed the red button on her globe, the air filled with soap bubbles. Four out of five stars: **** 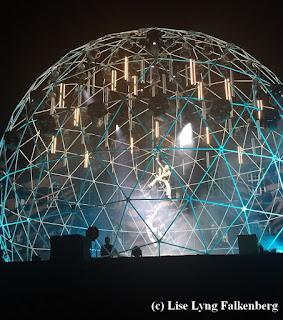 5. “Nobody but a princess…” is on the fifth place, not that I think it is deserved, but as it is the biggest free event, people would find it odd if I don’t mention it. This event replaces the wildly popular light show on the town square during the first four years. Unfortunately, the festival director found that the light show had become too popular, so last year he replaced it with something else that is not likely to suffer the same fate. This year it was “Nobody but a Princess…”. a horribly written modern fairy tale “like Hans Christian Andersen would have sounded today”. Are you kidding me? Just because you mention Facebook and Tinder and phrases that were popular ten years ago, it doesn’t make a story modern. Or good! It wasn’t even a real fairy tale as there were no obstacles to overcome. But in the show that was created by the German artists network Phase 7, there was some good singing (especially from Jacob Zinn), a guy who played a light organ (I haven’t been able to find out who) and some nifty acrobats (The Funky Monkeys). I suppose the dancing was good too, but the stage was so far up, that only the few who had been able to take possession of a balcony seat was able to see the dancers and actors on stage. The rest of us could only see heads bopping up and down! Two out of five stars: ** 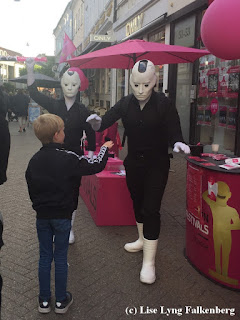 I didn’t see enough good things to make a Top 10, but at least the Menschines and “The Red Shoes” are worth mentioning too. The Menschines are a creation of German mime artist Silent Rocco where human-like robots wander the streets, trying to break down the boundaries between humans (Menschen) and machines. It was actually better than the princess-show, so I’ll give it three stars: ***. “The Red Shoes” was an exhibition at Odense Town Hall of the costumes of drag queen Polly (Poul Sylvestersen). Some of the costumes were based on Hans Christian Andersen fairy tales like “The Red Shoes”, “The Snow Queen” and “The Little Mermaid”, but there were very few of them. Still I’ll give them three stars: ***. 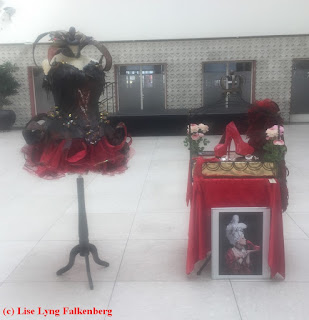 Like other festivals in Odense, the H. C. Andersen Festivals are not getting better over time, but worse, and even the public transportation problem (there is no public transportation in the city centre and the last busses at the train station leave before most evening events end!) hasn’t been solved, yet. Still, the festivals are here to stay, I guess, so now I only have to figure out why it is called “festivals” instead of “festival”.
at August 26, 2018 No comments: 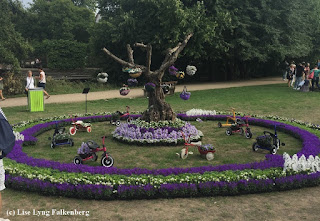 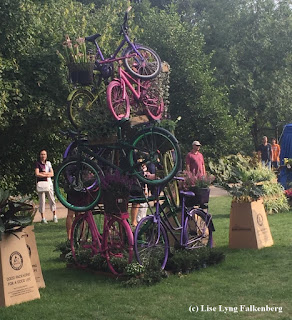 The 19th Odense Flower Festival took place here in Odense Denmark on August 16-19, 2018. Regular readers of this blog will probably know what I am going to write next – so they can just skip the text and look at the photos, whereas new readers should read on. 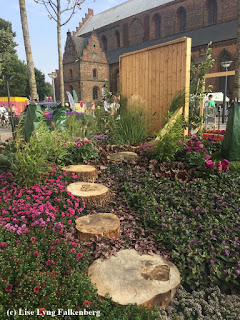 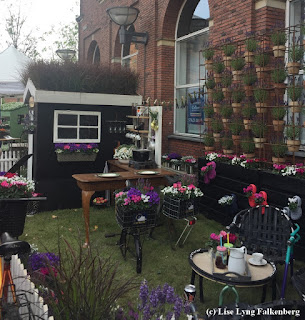 Well, originally this annual flower festival started out as an exceptional flower fairy land with imaginative floral sculptures everywhere in the city centre, but as I have pointed out many times within the last five year or so, the magic has been replaced by greed. Odense Flower Festival is no longer about giving the visitors a look into the amazing world of flower art and sculptures, but about nursing schools selling as many flowers and plants as possible. 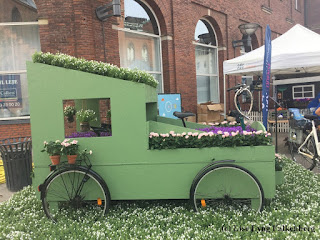 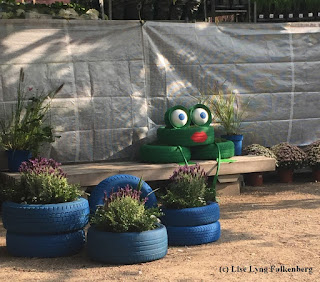 Each year we say to ourselves here in Odense, that by now the festival has hit rock bottom and that it won’t be able to get any worse, but every year it does! I don’t know how the ones arranging the festival manage to do it, but it gets more boring by the year. 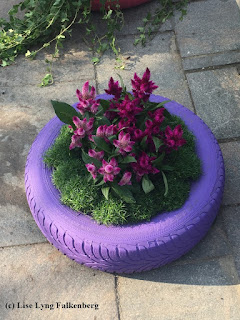 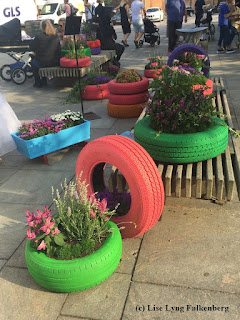 It was no different this year where most of the exhibited items weren’t even flowers, but green plant, that were arranged in pots, in tires or on bicycles. The only floral sculptures that I was able to spot were the ones that the festival has recycled the past many years. At least the recycling of the floral sculptures fitted in with the theme, as the theme this year was “Cycling – Recycling”. 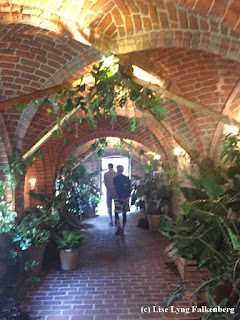 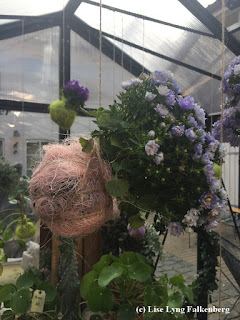 The most interesting exhibitions, like the two bicycle trees, could be found in Eventyrhaven (the Fairy Tale Garden), but other than that, the flower festival this year was a huge disappointment. Even the exhibition areas in the city centre had been heavily reduced. 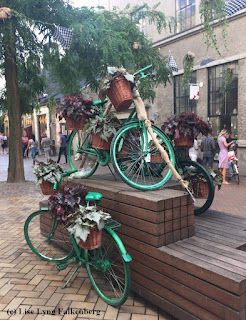 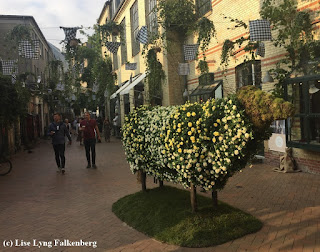 For several years I have been boycotting the festival because I was so disappointed, and I think that’s what I’ll do again next year, and then only upload photos – and recycle my bad reviews! Enjoy the pics, though. 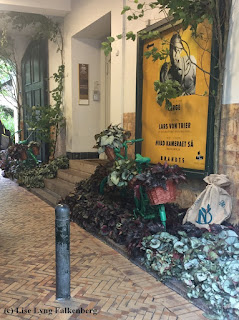 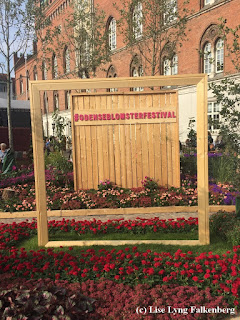