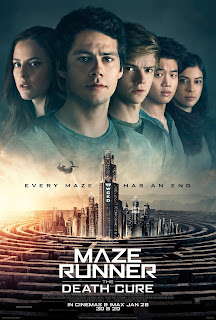 Wes Ball’s third Maze Runner film “Maze Runner: The Death Cure” picks up where its predecessor left us in 2015 with Thomas (Dylan O’Brien) leading the surviving Gladers and members of the Right Arm resistance on a quest to free their friend Minho (Ki Hong Lee) from the wicked organization WCKD.

The reason why we’ve had to wait so long for this third instalment of the series is that O’Brien was injured in 2016 while filming a scene for it. His injuries included concussion, facial fracture, and lacerations and were quite serious, so he needed time to recover.

Is the film worth the wait then? Well, as its predecessor it has very little to do with the book it is based on (the American author James Dashner’s young adult dystopian sci-fi novels) and it is very action-packed. To free Minho our heroes must enter the “Last City” where WCKD has its headquarters and on their way, they have to fight Cranks, humans infected with the zombifying virus the Flare. They get unexpected help from a former enemy as well as the rebellion leader Lawrence (Walton Goggins) and in the chaos of rebels storming the city, Thomas and his friends try to save Minho and the other immune children who are used as guinea pigs in WCKD’s labs.

Although action-packed, the film is way too long, 141 minutes, and it could easily have ended half an hour earlier. The end itself is… pointless, I think is the right word. It is very unfulfilling, when there has been no reason to why your heroes had to go through all the struggle and pain and that is the case with the entire Maze Runner series, if you really think about it. Besides, the people who die in the book also die in the film, so consider yourself warned!

As for the actors, Dylan O’Brien as Thomas suffers from the hero problem: he just has to look good and be heroic and that is not enough to make a character interesting. The one I noticed the most was once again the British actor Thomas Brodie-Sangster as Thomas’ sidekick Newt, whereas my daughter (yes, I brought her along again, although she is now nineteen and almost too old for this kind of YA-films!) was fond of the Korean-American actor Ki Hong Lee as the missing Minho. Worth mentioning is also Walton Goggins, but that’s mainly because his character Lawrence looks like Aerosmith singer Steven Tyler without a nose! All in all, I’ll give “Maze Runner: The Death Cure” three stars out of five: ***
at February 18, 2018 2 comments:

Compared to the last many years, I didn’t read much in 2017. The main reason for this was that our local library had closed for almost a year due to renovation. Because of this, I had to find my books elsewhere and my main source became the housing association laundrette! Here people left their old books that they didn’t want anymore, and I picked up a few, several of them in Danish, but not all of them good. One was even so bad that I had to give up on it altogether, namely the very silly correspondence between the two Danish female writers Maise Njor and Camilla Stockmann collected in the book “Michael Laudrups tænder”.

Because I got my books from a Danish laundrette this year, I’ve only read novels, biographies and non-fiction in English and Danish, so I’ve been missing out on literature in German and I’ve even come to feel a little rusty in French and Japanese.

I did, however, buy a few books during 2017 myself, namely the Japanese “Junjo Romantica” vol. 18 (as I love this yaoi manga series) and then Mike Nesmith’s autobiography “Infinite Tuesday”. I’m a big fan of both the Monkees and Mike Nesmith’s various solo projects and I loved his novel “The long, sandy hair of Neftoon Zamora” from 1998, but the autobiography was a bit of a disappointment. I’d hoped to hear about his creative work, but instead the autobiography is full of namedropping and Nesmith telling his readers about all the famous people who think he is wonderful!

The best book I read in 2017 was without doubt Danielle Trussoni’s “Angelology”. It is a clever, intellectual novel about a most fantastic mystery concerning nuns, Nazis, fallen angels, cave exploration, Abigail Rockefeller, the Orpheus myth and musicology, told with a dash of both James Bond and Project Runway. It’s a must read, bit unfortunately vol. 2 in Trussoni’s Angelology-series, “Angelopolis”, is as bad as the first one is good.

Of course, I also had to re-read Stephen King’s “It” due to the film realise in 2017 and of course the novel is better than both the new film and the tv mini-series from 1990, although the sex orgy scene with the seven 12-year old kids (one girl having sex with six boys!) is VERY disturbing and pure child pornography. It’s a mystery to me how King got away with it and why he wanted such a scene in the first place! In any case, both the book and the film miss something essential, when we speak about “It”, and that is Tim Curry as Pennywise. Beep beep, Richie!

Here is a complete list of the meagre fourteen books that I managed to read in 2017: