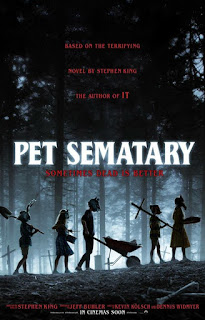 “Pet Sematary” from 1983 is one of the scariest novels that Stephen King has ever written and the film from 1989 based on the book and directed by Mary Lambert was pretty scary too, despite the lack of good special effects and an at times slow pacing. The ending scene still sends chills down my spine. Because of this my expectations were high when I first heard about the 101 minutes long remake directed by Kevin Kölsch and Dennis Widmyer. With modern day special effects, I thought that this new “Pet Sematary” version would have potential of becoming a new horror film classic, especially when I saw the film posters of some really creepy kids wearing animal masks, but let’s face it. It’s no classic. On the contrary, it is outright boring

The film tells King’s old story about Louis and Rachel Creed (Jason Clarke and Amy Seimetz) who move to Ludlow, Maine, for Louis to work as a doctor at the university hospital. They are accompanied by their children Gage (Hugo Lavoie and Lucas Lavoie) who is perhaps two or three years old, eight-year-old Ellie (Jeté Laurence) and the cat Church.

The family is soon confronted with a creepy pet cemetery (spelled “Pet Sematary” on the sign as it is mostly used by children who bury their dead pets), the kind, elderly neighbour Jud Crandall (John Lithgow), who knows more than he tells, as well as hauntings from the past (Rachel’s sister Zelda played by Alyssa Brooke Levine), and from the present (Louis’ dead patient Victor Pascow played by Obssa Ahmed).

WARNING! SPOILER ALERT! Luckily, I knew in advance that in the new film, there was a change of antagonist, so to speak, as it is Ellie who dies and not Gage like in the novel and the original film. At first, I found it quite annoying, but then I thought, hey, maybe it’ll work. At least the film makers found it scarier as an older child could wreak more havoc than a toddler, but for me it doesn’t work. Ellie does pretty much the same things that Gage originally did, but I found him scary because he is so young whereas Ellie is so old that her age doesn’t to add to the scare-factor. In other words, she never gets really scary and that’s the problem with the entire film. It’s boring. Sure, there are some scenes with Rachel’s sister Zelda who suffered from spinal meningitis that are quite scary, but the whole thing with the burial ground and people coming back. Yawn! A sullen school girl is just not as scary as a demonic toddler!

I don’t mind changes to a story if it makes a better film, but the changes here are never really used for anything. In the original version, Jud has a wife, but in this version, she has died, and we get to believe that maybe Jud has buried her, and she has come back, but we never really get into that story. And what is the whole deal with the masked kids that were shown on the poster and in the trailer? They are never used for anything and only appear in a short scene almost in the beginning of the film. Please, don’t make promises in films like showing us these kids or hinting at Jud’s story if you don’t mean to use it! If you really want to change the script drastically from the original story, then add something really scary instead of subtracting what is already there.

For me, especially the ending is really, really bad. Sure, I appreciate the “reversed role”-joke, as now the whole family is ganging up on Gage, where it used to be him terrorising the family in the original version, but the way it is filmed, it’s just another non-scary scene. I left the cinema thinking, “Was that it?” and that’s not a good thing for a horror movie.

If I have to say something positive, it is to give credits to the actors. Especially John Lithgow and young Jeté Laurence stood out for me, but not enough to save this film, where the changes from the original story were not for the better, Besides, I missed Stephen King who had a cameo in the original film.

As this new “Pet Sematary” is going to sink into oblivion for me, I can’t give it more than two out of five stars: ** 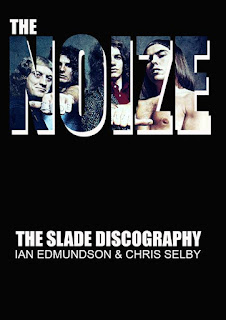 Don’t you just love, when a book does exactly what it promises to do? I certainly appreciate it and “The Noize” is for sure such a book.

Over the years, loads of books have been written about the British (glam) rock band Slade that had its heydays in the seventies, but none have taken a thorough look at the releases by the band. This is what the two authors, Ian Edmundson and Chris Selby, set out to do.

In the author’s notes, the two authors say that “this book’s primary aim is to catalogue and discuss all of Slade’s UK releases and take in the most interesting overseas versions of these and some unique foreign releases,” and that is exactly what it does. Meticulously and faithfully, every UK release is listed chronologically, from the very first 1964 acetate disc by the Vendors (forerunner for Slade as the band included Don Powell and Dave Hill) to the latest 2018 solo EP from Jim Lea, decades after the original Slade had packed it in.

No matter if it is a single, EP, album, box set or an acetate or test pressing, as long as it is connected to Slade, the release is examined, discussed and presented with every possible recording and package info, track descriptions, contemporary reviews and photos. This is very impressive as the research alone must have been difficult and extremely time consuming. The authors deserve nothing but respect for this work.

The book is spiced up by short biographical information about the band and its members as well as personal and sometimes funny observations by the two authors. This makes the book an energetic and entertaining read instead of a dull and repetitious catalogue.

For a hardcore Slade fan like myself this book is a must, and for others it is a unique opportunity to dig into the releases of what was one of Europe’s most successful bands in the early seventies. I bet you’ll be surprised and entertained of what you’ll find, so put on a good Slade record and start reading!

I’ll give “The Noize” five out of five stars: ***** (and it’s not due to the authors calling my official biography about Slade drummer Don Powell “the absolutely definitive Slade autobiography”, because it isn’t. It’s a biography).