The Boy Who Would Not Grow Up - But Did 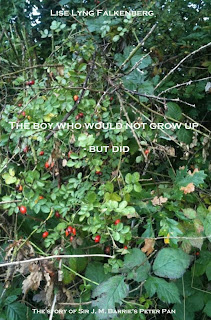 Finally my Peter Pan book is available in English at Smashwords Amazon.com and Amazon.co.uk. When "The Boy Who Would Not Grow Up - But Did" was first published in Danish in 1999, it was hailed as an indisputable literary renewal of Peter Pan-studies. It was regarded the most thorough, informative and entertaining book on the subject and went on to inspire directors of both documentaries and stage plays working with the Peter Pan story. Now 14 years later it is still regarded one of the most essential studies in Peter Pan.

The book deals with both the Scots author Sir J. M. Barrie and his creation Peter Pan. Barrie wrote his story about Peter Pan no less than five times and in "The Boy Who Would Not Grow Up - But Did" I analyse and compares all five stories in order to show that both the literary story about Peter Pan as well as Peter's "life story" undergo developments. Furthermore I show how other characters in the stories, such as Wendy and Captain Hook, go through developments as well, and I try to illustrate how Peter Pan's universe gets more and more obsessed with death and sexuality, the more Peter develops.
at March 11, 2013 42 comments: