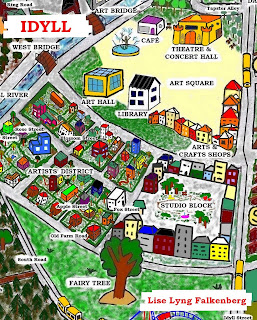 In a dreary landscape, a woman with no memory approaches a wall of an insurmountable size. She has no idea who she is, where she came from, or what awaits her behind the wall. Is it Paradise? A second change? Unicorns? Death? The Devil is in the detail in my timeless new novel “Idyll”, which was published as an e-book on February 28th, 2019.

Written in the genre magic realism, “Idyll” stems from the same literary gene pool as the very detail-oriented, weighty volumes of the likes of J.K. Rowling and Haruki Murakami. It is, however, both a fairy tale for grown-ups and a subtle, but persistent social commentary.


In a female narrative context where culture reigns, where Matisse and Le Guin eliminate meanness and Bach and BTS blow away everything bad, the novel explores cultural values, inner development, artistic creation, myths, morals, mermaids and memory loss. It denounces the political reign of aggressive, self-centered oppressors and points out the lack of true solidarity, inclusion and equal rights in the world of today, while examining the costs of an ideal society free from rigid rules and norms.


“Idyll” is illustrated by my own mouse-drawn images from a cartoonistic, magic reality and it is available from


and most e-book stores around the world.

BTS and the Danish GAFFA Awards

The South Korean band BTS was nominated for their very first Danish music awards when the readers of GAFFA, Denmark’s only “serious” music magazine, had nominated them in the categories best new international act, best international act and best album at the annual GAFFA Awards show, which takes place here in the city of Odense, Denmark, where I live. 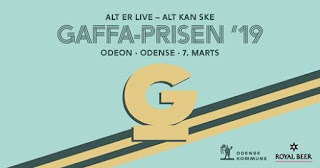 This was a very big deal, because although BTS are international, Grammy-nominated, Billboard Award-winning superstars with several Billboard top hits and sold-out world tours, the Danish press - as probably the only one in the world – has chosen to ignore them. The reason for this is that they sing in Korean and are a labelled a boyband, which in the west means that you mainly cater to children and teenagers, and of course the Danish press can’t be bothered to look for themselves to see that BTS are different. The boyband label, which they got in the west as we are not familiar with Korean idol groups, has been very harmful to BTS in many western countries, but especially in Denmark, where the press refuses to take them seriously. Therefor these GAFFA nominations were extremely important. 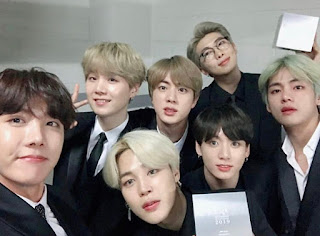 Before the GAFFA Awards we were a group of BTS-fans (we are called A.R.M.Y.) who met at a local restaurant to have dinner and fun. Some of us knew each other in advance as we usually meet up for dinner before local BTS-events, others came from our capital Copenhagen and other towns in Denmark. We had a great evening with a lovely buffet, BTS-quizzes with amazing prizes sponsored by the BTS Danish ARMY fanbase and free BTS merchandise from the “All in Kpop” store in Copenhagen. 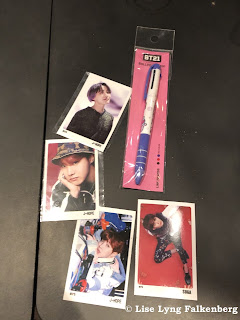 We then went to the GAFFA Awards show that was held in the music and theatre centre ODEON. It has a capacity of 1,740 seated guests and the place was packed. The show lasted two hours and was livestreamed on YouTube and I think more than one viewer had quite a shock, especially if it was their first meeting with the Danish music scene. Right from the start the audience was confronted with the VERY loud metal band Møl, they saw the amazing duo Ravi Kuma who with the titles “I Only Make Out with Myself” and “Stop Staring at My Dick” was my favourites that night, they met the singer Fallulah who dressed as a bird and only answered with bird-sounds when interviewed, and then of course there was the drinking. Both artists and audience drank heavily during the evening, so the audience got very loud and the artists, especially the group The Minds of 99 who won five awards, came on stage totally stoned, unable to speak in full sentences and spilling beer all over. But it was hilariously funny. Believe me! 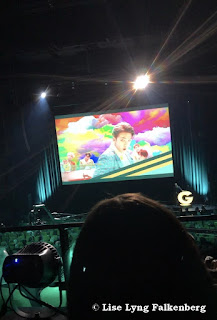 The Danish A.R.M.Y. was very enthusiastic about the win which the host, journalist Anders Breinholt, was quick to pick up on. Unfortunately, he - along with some of the journalists who later reported about the show - made the classic mistake of presuming that we were teenagers, although our average age that evening must have been 30+! 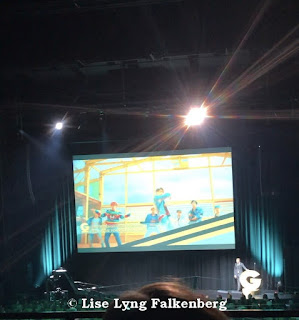 In any case, the wins are very important to the Danish A.R.M.Y. as now the Danish press can no longer pretend that they have never heard about BTS or that BTS will never make it because they sing in Korean. Now we only need the reporters to realise that the majority of BTS fans aren’t teenagers but grown men and women! 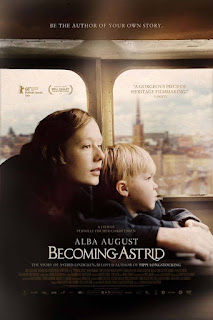 “Becoming Astrid” (original title “Unga Astrid”) is a Swedish-Danish film directed by the Danish female director Pernille Fischer Christensen. The 123 minutes long film is about the early years of Astrid Lindgren, the world-famous author of children’s books such as “Pippi Longstocking”, “The Brothers Lionheart”, “Ronia, the Robber’s Daughter”, “The Children of Noisy Village” and the “Emil of Lönneberga” series.

The film shows Astrid’s rebellious teenage years in the 1920’s provincial Sweden and how she was meant to do something out of the ordinary. Rather than behave like it was expected of a small-town young girl in Sweden back then, Astrid danced to her own drum, cut her hair short to look fashionably androgynous, had an affair with her thirty years older, married boss, the newspaper editor Reinhold Blomberg (Henrik Rafaelson), and ended up pregnant at the age of nineteen. She was then sent off to secretary school in Stockholm to hide the shame from the neighbours and eventually travelled to Copenhagen, Denmark, for clandestine childbirth, placing her baby boy, Lasse, in the care of a Danish foster mother before returning to Sweden. Here Astrid had to overcome poverty and struggles to get her son back, but when Astrid finally got him to Stockholm after three years, Lasse (Marius Damslev) didn’t want to live with this strange young woman who spoke a foreign language. The film ends when Astrid is on the brink of a new relationship with her new boss, office manager Sture Lindgren (Björn Gustafsson), years before she started writing children’s books.

The dominating lead role as Astrid is played by twenty-five-year old Alba August, daughter of the Danish Oscar-winning director Bille August and his Swedish wife, the internationally acclaimed actress Pernilla August. I for one was concerned about the reasons for picking the very pretty Alba August for this role, if it was solely because of her famous parents as she looks nothing like the scrawny, quite plain-looking young Astrid, but luckily Alba August has talent and she is a convincing Astrid.

Another character that is oddly cast too is that of Marie Stevens, the Danish widow who helped especially Swedish girls, raising their children for them until they were able to care for them themselves, and who became Lasse’s foster mother. The part is played by the Danish actress Trine Dyrholm who has nothing in common with the neat little widow Stevens of real life and I for one think that Dyrholm was cast solely because she is one of Denmark’s most sought-after actresses.

When I saw the film, the majority of the audience consisted of women in their fifties and sixties as we are the ones who grew up with Astrid Lindgren’s books, but even to an audience like that the pace of the film was a bit too slow and the film as such too long. It was beautifully filmed, though, dwelling on the pretty Swedish landscapes.

I’ve heard people complain about the film ending before Astrid started writing, but I don’t mind, as this is a film about the young Astrid. What annoys me is the artistic license that the director and screenwriters (director Pernille Fischer Christensen wrote the screen play with Danish screenwriter Kim Fupz Aakeson) use when they describe Astrid’s life. Here they depict young Astrid as a loner, which she wasn’t as she belonged to a close group of (girl) friends who had known each other since their first day of school. This close-knit girl group is nowhere to be found in the film. Among the girls was Anne-Marie (known as Madicken) whom Astrid adored, even to the extend, that she modelled her main character in the “Mischievous Meg” books on her as Meg’s Swedish name is Madicken. In “Becoming Astrid”, however, Madicken (Sofia Karemyr) plays no part in Astrid’s life, as Astrid’s only acquaintance seems to be her lover’s daughter Berta Blomberg (Mira Mitchell). In real life, nothing indicates that Berta and Astrid knew each other.

The relationship between Astrid and her family is also very oddly depicted in the film. In real life, Astrid showered the persons she loved with adoration, and her one-year older brother Gunnar Ericsson was such a person, but in the film, Gunnar (Willy Ramnek Petri) is hardly there. The person whom Astrid adored the most was, however, her father, Samuel August Ericsson, as he seemed the ideal man to her and many of her children’s book are about his childhood, especially the books about the children of Noisy Village. This kind of blind adoration for Samuel August (Magnus Krepper) is not shown in the film. Here only the strictness of Astrid’s mother, Hanna Ericsson, can be found, but in the film Hanna (Maria Bonnevie) is so strict that it borders on cruelty.

I guess the cruel mother and the absence of friends and strong family ties makes the Astrid of the film a tragic heroine, but the real Astrid was much more than that as she was a multifaceted person, loved by both family and friends. On one hand she just wanted to have fun and do things her own way without giving a damn about what others thought, on the other hand she experienced true tragic and sorrow early in life due to the unwanted separation from her son. This coloured her entire life and made her such an eminent advocate of especially neglected children around the world. Because of this, I think that the worst mistake that the film makes is to provide young Astrid and her little son with a happy ending that wasn’t there in real life. By doing so the film belittles the sorrow that played such a big part in what made the young thrill-seeking girl become the Astrid whom we love today.