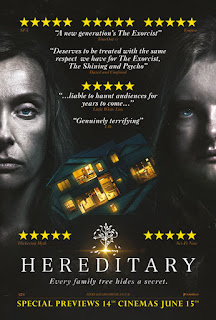 A lot of hype has surrounded the supernatural horror film “Hereditary”, which is written and directed by Ari Aster. In fact, it is his feature directorial debut.

Reviews have claimed that “Hereditary” is “the singularly most terrifying horror film in years”, “the scariest movie of 2018” and “a new generation’s The Exorcist” The critics just can’t get enough of it, but if you read the general cinema goers’ reviews on for instance IMDB, you’ll find that they give the film either the highest score of 10 stars or the lowest of 1 star. There are hardly any ratings in between. This huge difference intrigued me, so I took my nineteen-year-old teenage daughter with me to watch a screening in our local cinema and where I generally liked the film, she hated it!

“Hereditary” tells the story of the Graham-family, who has just lost their strong, but secretive maternal grandmother. Her daughter, Annie Graham (Toni Collette), is a miniature artist who lives in a large house in the countryside with her psychiatrist husband Steve (Gabriel Byrne) and their two children, the typical sixteen-year-old teenage son Peter (Alex Wolff) and the rather odd thirteen-year-old daughter Charlie (Milly Shapiro). No one really grieves over the loss of the grandmother except for the very strange Charlie, who is an expert in clicking her tongue and making nightmarish figurines and toys out of scrap, while behaving much more like an eight-year-old than a teenager.

After the funeral, horrific things start to happen, and Annie befriends a woman, Joan (Ann Dowd), whom she gets to know at a group-therapy session for the bereaved. Joan teaches Annie how to contact the departed through a “spirit-of-the-glass”-like ceremony and from then on, all hell breaks loose.

Of the actors, especially Alex Wolff and Milly Shapiro as the children are great and personally I would have loved to see much, much more of Shapiro’s Charlie. On the other hand, it is very hard to feel any sympathy for or identification with any of the adult cast, but of course I have to mention Toni Collette who has been praised everywhere for her portrayal of Annie. Personally, I found her to be a Shelley Duvall double in the way she looked and acted. The resemblance with Duvall as Wendy in “The Shining” is striking.

“The Shining” is not the only horror films to which “Heredity” pays tribute. “The Amityville Horror”, “The Exorcist” and “Rosemary’s Baby” are others that come to mind straight away, and Aster himself has said that he has been influenced by “Don’t Look Now”, “Carrie” and Bergman’s “Cries and Whispers” as well. I’m sure you can add more titles to the list, as Aster hasn’t quite found his own voice, yet, but borrows a lot from others.

Overall, the plot of “Hereditary” is at times fairly simple, at other times quite confusing and the end is really awful, ruining everything that the film has being building up to. In the first 110 minutes (approximately) of the 127 minutes long film, the pace is sedated, building up an almost claustrophobic sense of suspense with only little gore and few jump scares, but in the last fifteen crazy minutes, you realise that the author/director isn’t able to end the story in a way that fits the pace, and instead he delves into the kind of demon possession/body horror jump scares and easy solutions that usually belong to horror films of lesser quality and by doing so, he pulls the film down to a much lower level.

In any case, the slow pace and the claustrophobic suspense of “Hereditary” was what made me like the film and my daughter hate it. Although there are hauntings, demon possessions, people getting burned to death and graphic visual decapitations, the film is never really scary. It is much more about trauma and anxiety than it is about gore and ghosts, and viewers my daughter’s age aren’t used to that, so they get bored and lose interest halfway through the film. It is too bad, as it is actually a good film, if we forget about the ending, and I would have loved to give it lots of stars, but due to that ending – which is really stupid and feels like an easy way out of a plot that has turned messy – I can only give it three out of five stars: ***