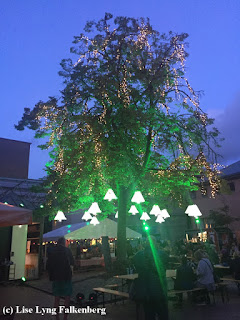 This year’s H. C. Andersen Festivals, which took place on August 20th to 27th, were the fifth since 2013 here in Odense, Denmark – hometown of world famous fairy tale writer Hans Christian Andersen (and me). Private businesses fund the biggest part of the festivals, so although the idea of a Hans Christian Andersen festival is good, the festival itself tends to be a bit commercial. 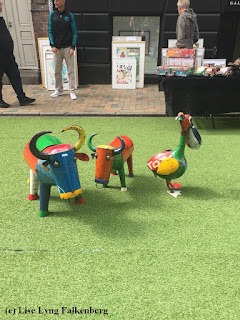 This year the programme boasted 500+ events, but if you took a closer look, less than 150 were different events, which were then repeated again and again. Some of the events were for children only, other for adults only and about ¼ was not free of charge, so you had to buy ticket to prices as steep as £80. As usual, I decided stick with the events that were free of charge, but unfortunately that excluded the most interesting of the concerts, theatre plays and other performances. Due to my health (disabling spine disease and 3 x knee surgery that hasn’t worked) I use elbow sticks/crutches and sometimes a rollator to get around, so I was only able to attend certain handicap friendly events anyway. Tuesday, I therefore started out in Brandt’s Cultural Centre where in the Passage, you could see Thumbelina’s “little big world”. There were a few giant flowers and insects, but it wasn’t especially impressive.
Two out of five stars: ** 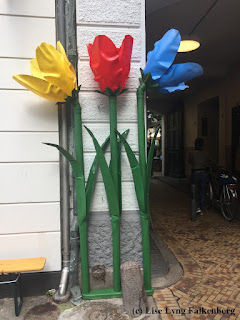 I then went to the Art Street, which is a recurring feature in the H. C. Andersen Festivals. This year the amazing tree-carpet that used to cover the street had been replaced by plastic grass, which I personally found disappointing. There were a few deck chairs and a sand box in the street and then a food truck and some art dealers. Unfortunately, there wasn’t any of the advertised music, theatre performances or opera, only the usual exhibition of art works by Narcis Gironell in Gallerie Rasmus.
Two out of five stars: ** 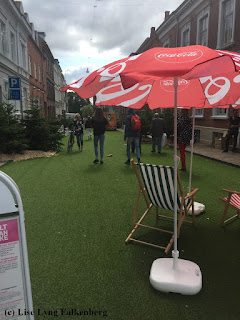 My next stop was the art building “Filosoffen” that houses an annual juried art exhibition during the Hans Christian Andersen Festivals. To me it seemed that there were less exhibited art works than usual and only a few works by Lis Engel, Per Jensen, and Tom Petersen caught my eye. The rest was mostly very gloomy and not imaginative or “Andersenian” at all.
Two out of five stars: ** 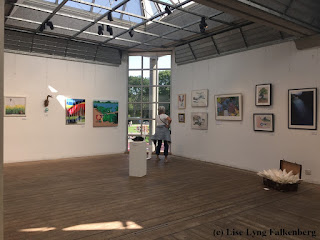 Finally, I went to the nearby art gallery “Kunstgalleriet”, which was exhibiting “Art with humour”. However, it turned out that this was just their usual exhibition of mostly naïve art that you can see all year round. Furthermore, it had very little to do with a Hans Christian Andersen festival.
Two out of five stars: ** 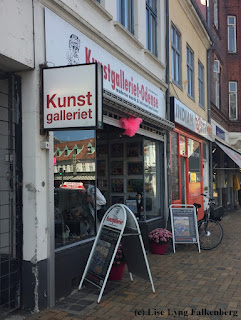 After such a two star day, I went to the street Norregade Wednesday in the hopes of finding something better. According to the programme a lot of different things were happening in this street, but I mainly came to see the living HCA character sculptures that were supposed to be placed in the street. Unfortunately, there was none.
Zero out of five stars: 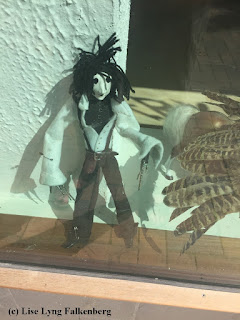 Then I went to see the sculptor Pernille Forsberg Bøjsen’s open workshop where she models dolls in cernit clay. I found the workshop, but it wasn’t open, so I had to take a few pictures through the window only.
One out of five stars: * 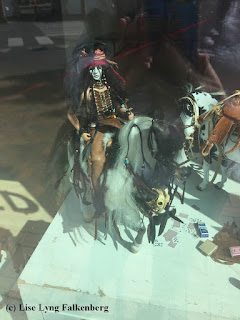 Finally, I went to see concrete sculptures being made by the land art artist Uffe Balslev, but when I got there, he was on a break and three women were working on a sculpture instead. I was the only spectator, by the way.
One out of five stars: * 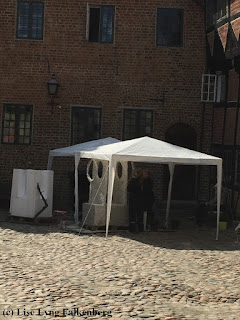 To tell you the truth, I was getting pretty p*ssed by now. I knew that a lot of great stuff was happening during the festivals, but I was just not able to attend. The magic happened at the expensive events. It happened in the evening and after dark where it is as good as impossible to get to and especially from the town centre with public transportation. And it happened spontaneously throughout the day with events like the emperor’s new carnival, the horse woman and different bands that performed in the streets of Odense with no fixed venue so you had to be lucky to catch them. Which I wasn’t. 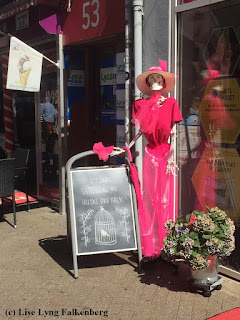 I couldn’t do anything about my back luck or my financial situation, but Thursday I managed to talk my daughter into going with me to town in the evening and help me get around the city centre without public transportation. We started out in the street Norregade where there was supposed to be a video installation, but there wasn’t.
Zero out of five stars: 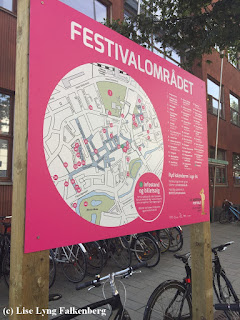 Then we went on to the nearby street, Vintapperstraede, to see the world of Ole Luk-Oie (Mr. Sandman). It turned out to be just the white umbrellas hanging over the street, which were there for the flower festival the week before too. It wasn’t particularly magic, not like last year where the umbrellas were accompanied by a beautiful video installation and besides, they had lit up in the twilight back then. They didn’t quite do that this year as half of the umbrellas didn’t have any lights and of the other half many of the lights didn’t work.
One out of five stars: * 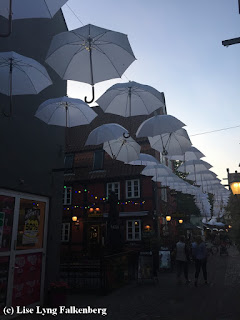 Our next stop was Thumbelina’s little big world at Brandt’s Cultural Centre and Passage. In the dark, it looked much better than in daylight. It was truly magic and we both liked it.
Three out of five stars: *** 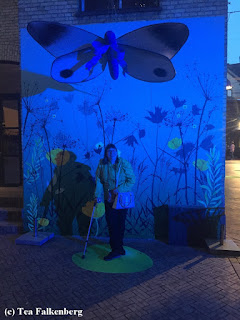 On amfiscenen (the amphitheatre), the Danish musician Kristian Leth was performing with his band. His music isn’t particularly my cup of tea, but in the warm summer night surrounded by the beautiful Thumbelina lights and tree, the atmosphere was amazing and we both enjoyed the concert.
Three out of five stars: *** 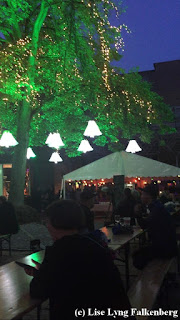 Unfortunately, we had to leave to catch the bus home at 10.30 p.m., so we missed the event “Svalesang” (“Swallow song”), a tour through Thumbelina’s world, which took place in my childhood backyard, which is now a fancy cultural venue called “Farvergården” (“Colouration Yard”). We also missed out on the high-tech drone and dance performance “Sunshine, freedom and a little flower” on the town hall square as it started when the bus departed. At least this last event we could hear every night from our balcony, as the music was very loud and the fireworks even louder, making all our windows rattle twice each night. Oh, well… 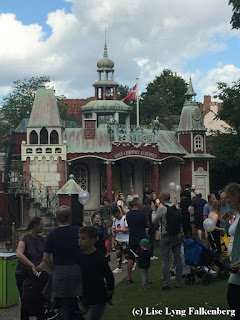 Friday was my last day at the festival, and here I went to see the last performance of the H. C. Andersen Parade at the Fairy Tale Castle in Lotze’s Garden next to the Hans Christian Andersen Museum. This parade consists of mainly children aged eight to eighteen, all dressed like characters from Hans Christian Andersen’s fairy tales. In a twenty-four minutes long musical they perform highlights from Andersen’s famous stories with Andersen “himself” as the narrator. It was good as usual, but also a bit sad. The parade has performed for seventeen years in Lotze’s Garden, but now the garden is to be part of the alterations of the museum, so there will be no room for the parade, which is to relocate to the park the Fairy Tale Garden behind Odense Cathedral.
Three out of five stars: *** 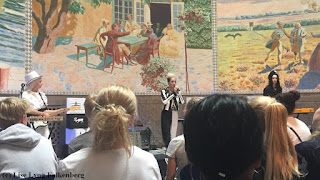 Finally, I went to see “Gothic Andersen”, a concert by Ras Bolding, Odense’s answer to Klaus Nomi. The forty-something goth composer, musician and singer went on stage with two young female musicians called Mie Moegunge (Brat) and Laerke Loemmel (Lout) or Miss White and Miss Black.
The three of them took us through the dark side of Andersen’s universe with the four fairy tales “The Snow Queen”, “The Shadow”, “The Story of a Mother” and “The Little Mermaid”. The girls played synthesizers and electric guitar and bass whereas Bolding himself after brief, but entertaining introductions to each fairy tale, sang, acted, and performed the stories while playing synthesizers and an old commodore 64. 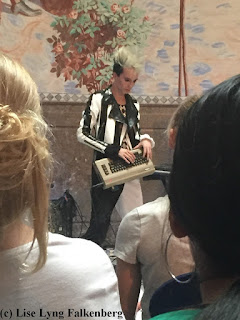 The concert lasted a few minutes short of an hour, but I wouldn’t have minded if it had been a lot longer. Each of the compositions consisted of interconnected movements with changing metres, recurring themes and hints of pop, waltz and industrial music, folk music, Middle Eastern music and more. Influenced by Wagner, Beethoven, Bach and Kate Bush, Kraftwerk, Depeche Mode, Jean-Michel Jarre and perhaps the aforementioned Klaus Nomi (?), Bolding’s music reminded me a lot of what was popular in my youth and I think that I and the other “middle-aged” people in the audience understood it a lot better than the high school students who were there with their teacher and who took up 90% of the seats in the beautiful Memorial Hall in the Hans Christian Andersen Museum.
Seeing Bolding & Co. perform, they were as “un-Danish” as I am said to write and they would have fitted in with the New York club scene in the early 1980s a lot better. Although the show as such was a bit of an anachronism, the entertaining professionalism with which the music and the entire performance were composed and executed was delightful and to me, “Gothic Andersen” was the highlight of this year’s H. C. Andersen Festivals.
Five out of five stars: *****

Despite the slow start, my festival ironically had a happy ending with Ras Bolding’s goth concert. Still, it was not quite enough to make it a good festival, and personally I missed the three events that I look forward to each year. One was the local Pink People street theatre, the other the Italian death-defying acrobatic brothers Evènti Verticali, and last but not least the spectacular 4D light show by “We Create Magic” on the façade of Odense town hall. I have no idea why these three events weren’t included in the festival this year, especially the 4D light show as it has always been the heart and soul of the festival. I surely hope that the soul and the true magic will be back next year!