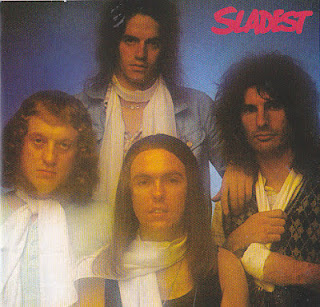 Last year Salvo re-released Slade's compilation album "Sladest" and as such a review is long overdue. My excuse is, that I didn't get my review copy until now, but better late than never as they say…

"Sladest" was originally released in 1973, just before Slade had their greatest hit ever, "Merry Xmas Everybody", so that particular song is not featured on the album. Instead you'll find a pleasant mix of hits and more obscure songs from Slade's past before they reached fame. Fourteen songs all in all from the first single they made with their manager Chas Chandler "Wild Winds Are Blowing" (1969) to Slade's number one hit Squeeze Me, Pleeze Me (1973) compiled in a non-chronological running order.

Salvo's version includes four bonus tracks: the three 1973 tunes "My Friend Stan", "My Town", "Kill 'Em At The Hot Club Tonight" and a rare studio recording of Slade's cover version of Ten Years After's "Hear Me Calling". If you're a Slade, fan you've probable heard all of the songs on the album before, but this studio recording that was recently discovered on a vinyl acetate, is something new and well worth the price of the album, more tightly structured and with an interesting double vocal from Noddy Holder and Jim Lea.

The album comes complete with photos, original liner notes by Bob Houston from 1973 and new liner notes by Chris Ingham. As usually the tracks are beautifully remastered by Tim Turan at Turan Audio.