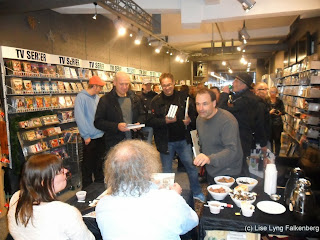 Saturday the 9th of October Don and I did a book signing in Don's Danish "hometown" Silkeborg. It was the record store Stereo Studio that had invited us and when we arrived a quarter to one on that Saturday noon, the shop was already crowded with people who wanted to buy the book and have it signed by Don and me. 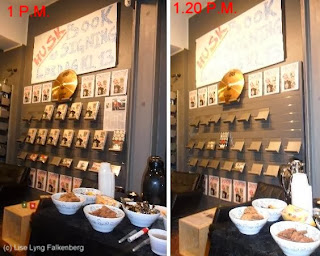 Some of the people had ordered their books in advance and that was a good thing, because within 20 minutes every single book in the shop was gone. As there weren't enough books, some people bought Slade CDs instead and had Don sign them. Others had brought their own old LPs and had them signed. 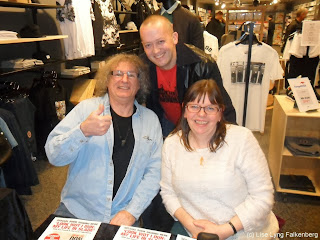 At the signing we met our old friend Jonas, the drummer of Danish band The Guv'nors with whom Don has worked in 2007. It was great seeing him again. We also met 4 guys from my hometown Odense who had travelled all the way to Silkeborg to have their books sign - because they hadn't been aware of the book signing in Odense on October 22! When Don had to leave for a birthday party straight after the book signing, these 4 guys invited me on a drink in a nearby pub, so that I wouldn't have to stand alone at the station for an hour, waiting for my train to arrive. Thanks guys! I hope to see them again in February 8th, 2014, where Slade will be playing in Naestved in Denmark - their first Danish gig in ages! 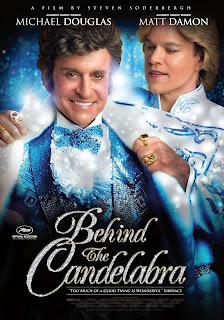 Based on Scott Thorson's autobiographical novel, Steven Soderbergh's film "Behind the Candelabra" tells the story of the 6-year relationship between Thorson and his much older lover, the flamboyant piano player Liberace. Originally an HBO TV film, "Behind the Candelabra" was received so well that HBO sold the theatrical rights for other countries and that was how I got to see it here in Denmark in October 2013.

In real life Thorson was 16 years old when he met the 57 years old Liberace in 1976, but the film makes him out to be a little older. Probably in order not to gross out the audience as you could argue that Liberace was a paedophile who seduced boys who hadn't reached the age of consent, yet. The film is not about paedophilia, though, but about a showbiz relationship.

The young animal trainer Scott Thorson and his older boyfriend Bob Black goes to Las Vegas to see a Liberace show and meet the artist afterwards. Young Scott, who has been raised by foster parents, immediately falls for the much older man and although he is being warned, Scott refuses to see the dark sides of Liberace. Scott and Lee, as Liberace is called, are living the fast life, but to Scott it means having to say goodbye to his freedom, career and identity and hello to drugs, plastic surgery and financial dependency.

To be honest, Liberace has always seemed a bit ridiculous to me, but seeing the film, I fully understood why Scott fell in love with him. The film is very clever that way, very manipulating and intelligent. When Scott gets charmed, we get charmed. When Scott is being manipulated, we are being manipulated. And when Scott is hurt, we hurt. It's brilliantly directed and very witty too.

And then of course the cast is amazing. Michael Douglas IS Liberace. Full stop. Creepy, charming, vulnerable and manipulative. And Matt Damon is funny and youthful and naive as Scott Thorson. Both of them deliver strong, stunning and spirited performances and are believable as a gay couple.

Worth noticing are also Scott Bakula as Scott's ex-boyfriend Bob Black, Rob Lowe as the plastic surgeon (and drug dealer) Dr. Jack Startz, Debbie Reynolds as Liberace's mother Frances Liberace and Dan Aykroyd as his manager Seymour Heller. I must admit thought, that Dan Aykroyd was so well disguised and Debbie Reynolds had aged so much that I didn't recognise any of them, so I had to read the credits before I realised who they were!

To sum up: "Behind the Candalabra" is one of the best films I have seen this year. It's a must see, even if you have never heard about Liberace before! Four out of five stars: ****