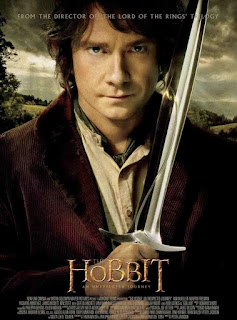 Peter Jackson's long-awaited first film based on J. J. R. Tolkien's novel "The Hobbit" opened in theatres on the 12.12.12. I loved Peter Jackson's versions of "Lord of the Rings", but I must admit that when I learned that "The Hobbit" was going to be made into not one but three films, I was a little sceptical. Even more so when I found out that this first film, entitled "The Hobbit: An Unexpected Journey" lasted 169 minutes! That's almost 3 hours! I wondered why on earth (or Middle-earth) Jackson needed so much time to tell the rather short tale of Bilbo Baggins' quest.

Well, I went to see the film with a friend and although it was rated PG-13, most of the audience were people between 30 and 70. They had without doubt all read the book, but if they thought they were going to see the film-version of this book, they had another thought coming. The fairly easy-to-follow story about Bilbo's journeys to the Lonely Mountain with a group of dwarves to reclaim a treasure stolen from them by the dragon Smaug is more or less just a side-story in this film. The trigger, so to speak.

Smaug is no longer the main "villain", instead the main enemies are the white orc Azog (Manu Bennett) and the mysterious Necromancer (Benedict Cumberbatch) who lives in Dol Guldur. Being a Dane I've always had a problem with the name Dol Guldur, because in Danish it doesn't mean "Hill of Sorcery" but "The public management training gold watch", which makes it very hard not to laugh when you hear it! The events concerning these new enemies you won't find in the novel and there's a whole lot about the brown wizard Radagast (Sylvester McCoy) too, who really belongs in "The Lord of the Ring", along with the 15 minutes long prologue with old Bilbo and Frodo.

It is nice to see Ian Holm as old Bilbo and Elijah Wood as Frodo again, though, and Ian McKellen gives his usual brilliant performance as Gandalf. Martin Freeman is believable as young Bilbo and at least I understand his Bilbo better than I did with the Bilbo of the book. Maybe because there is a certain "Arthur Dent"-ness about Freeman's version! As for the dwarves, Richard Armitage is proud and stubborn as the exiled dwarf-king Thorin, but the rest of the dwarves are hard to tell apart. You'll notice the white-bearded Balin (Ken Stott), the frank Bofur (James Nesbitt) and the young brothers Kili (Aidan Turner) and Fili (Dean O'Gorman). The rest you don't really notice as they are hard to distinguish from each other, maybe with the exception of the fat Bombur (Stephen Hunter) who looks a bit like Obelix! I was however surprised that Gollum (Andy Serkis) is so much more a comical character than a scary one in this film and I was even more surprised that the ugly, fat Great Goblin speaks very eloquently with the voice of Barry Humphries. He doesn't sound like a daft goblin at all!

When that is said, it is not the acting that you notice in this film. It is the beautiful scenery, the wonderful sets, every picture is amazing down to the very last detail. Just for that, the film is worth seeing.

All in all I think "The Hobbit: An Unexpected Journey" is a wonderful film, but to be honest, I think it would have been even better if Jackson had cut down on all the endless battle scenes and stuck to the story of the book. And I would still have preferred it to be just one film instead of three.

Build Me a Bridge 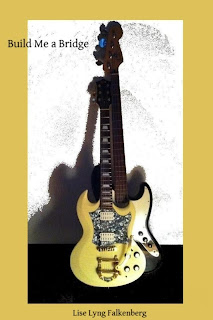 My new novel "Build Me a Bridge" is now available from Smashwords. It is a psychological novel about interdependence, age, love and murder.

Identical twins, Adrian and Charles Lewis, have reached success with their heavy rock band, Pan’s Revenge, but their world is shaken when death and love enter their lives. Emotional insecurities, fear, prejudice and an elusive killer threaten to tear the brothers apart. In the end they have to recognise the disturbing truth about their interdependence.

“Build Me a Bridge” gives an insight into the British music industry and at the same time it is a murder mystery and a story about love’s many faces. The three layers of story are told by each of the twins as well as their bodyguard and the use of three narrators gives the reader an opportunity to explore the different layers of the story from different perspectives and with different insights.