How come that I, a fifty-five year old Danish woman, is completely mad with “Hope World” by a twenty-four year old Korean guy named j-hope?

Well, J-Hope is one of the seven members of Korean K-pop, hip hop, R&B, EDM boyband BTS who are currently the hottest and most talented artists worldwide (See my blog post “BTS for beginners” for more information).

Although I like all seven members of BTS, J-Hope has always been my bias as he seems the most interesting to me. He is the most all-round entertainer of the seven, as he started out as one of the best street dancers I have ever seen, then gravitated towards music together with BTS where he became a skilled rapper, singer and eventually songwriter and producer. Furthermore, he is a born entertainer who ranges from an almost Las Vegas / Liberace kind of performer over a bright, sunshiny K-pop persona to a hardcore hip hop rapper. Finally, as the son of a Literature teacher, he is very well-read and great at playing with words, which shows in his lyrics, and that is probably why I identify with his world so easily.

What is “Hope World” then? It has been hyped as a mixtape, J-Hope’s first after his fellow BTS rappers RM and Suga had their own mixtapes released in respectively 2015 and 2016, but in fact “Hope World” is an EDM pop funk soul rap hip hop album rather than an ordinary mixtape. Sure, it is self-released for free download, but at the same time you can also buy it on for instance iTunes. Why not just release it as an album then? Because to J-Hope it’s music before money so it shouldn’t be money that decides if you’re able to listen to his music. Despite the free download option, the album topped the iTunes charts in 75 countries. 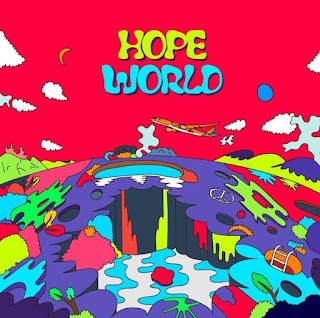 J-Hope worked on the album’s seven self-penned tracks for two years in his spare time from touring and working with BTS, but despite his massive work pressure, there is not one bad track among the seven. The album opens with:
1. Hope World, in which he introduces himself as j-hope (stylised with small letters as a solo artist, whereas he is J-Hope with capital letters in BTS). He calls it his musical calling card as it is the first number on his first solo album. A bright song produced by j-hope and DOCS Kim and complete with a talkbox part and everything. It is a conceptual song, where the underwater sound in the beginning sets the motif as it is a reference to Jules Verne’s “Twenty Thousand Leagues Under the Sea”, which was a childhood favourite of j-hope’s. The song casts him as Captain Nemo showing the listener around in his world, the listener being Professor Aronnax. It’s a breezy song, easy to sing along to, but it also shows that j-hope is deeper than just the bright Hope World sound. In the lyrics he says that he is “a positive rather than negative type”, who respects his parents, but he’s not simply the fun j-hope as he is “not a romanticist” and “I enjoy curses and vulgar language, but I don’t do that in my music.”. Eventually the lyrics boil down to “A lifetime of thanking for the environment I’m given.”

2. P.O.P. (Piece of Peace) pt. 1 further introduces j-hope to the listener. The track is produced by j-hope himself, so he is very attached to it, saying that the beat came natural to him and expresses himself. The song touches upon the sensitive topic of living in a dangerous war-filled world, in which it is j-hope’s hope that his music could be “someone’s strength, someone’s light” and a piece of someone’s happiness. “I want to help,” j-hope says, because he knows pain and how it is not to be heard. He wants to speak for people who can’t be heard and hopes his music will comfort the listeners and give them at least a piece of inner peace so they would be happy with their lives. The song is called pt. 1, because j-hope thinks it is important to keep talking about these topics.

3. Daydream (백일몽) is the main song of the album, produced by j-hope and Pdogg. Where the two first songs were about j-hope, “this expresses my shadow”, he said in a direct broadcast on the V LIVE broadcasting app on the release day; March 2nd, 2018. In this shadow-side song, the lyrics go, “My character is half and half”, because the artist known as j-hope is only one half of the person, the other half being Hoseok Jung (or Jung Hoseok as they say in Korean), the man behind the artist. This man is “abstaining from large cravings”, as life as a public figure has responsibilities and burdens. He is not complaining, though, “Not a reality refusal, discontent, misfitting, ain’t none of that”, but like everyone else he is caught in the “common psychological escape” called daydreaming. His daydreams are not about being rich and famous, as he has already reached that as J-Hope. Instead he dreams about leading a normal life. He wants to cry in peace, party like crazy and be fluttered with love, as he puts it. Impossible dreams for a Korean role model idol and that’s why he happens to “wish on a sky, wish on a scar” instead of a star and compares his daydreams to Alice’s trip through the rabbit hole or Harry Potter’s to Hogwarts. As the topic is a bit serious, j-hope keeps the beat of the song at a house tempo, the music contrasting the topic, thereby making the song more charming, "an untamed raw charm," as J-Hope puts it in the V LIVE broadcast. J-Hope wrote the song in a Brazilian hotel room and you can almost hear the hot samba-country resonate in it.
The song was the first of two from the album to be promoted with a music video that complemented the song brilliantly. Bright, funny and ironic and showing the two sides of j-hope / Hoseok, it both refers to the famous French Édouard Manet painting “Dejuner sur L’Herbe” (“The Luncheon on the Grass”) and has Arthur Dent from Douglas Adams' "Hitchhiker’s Guide to the Galaxy” novels text j-hope “DON’T PANIC”. The mv “Daydream” received over 12 million views within the first 24 hours.

4. “Base Line” was supposed to be an interlude but ended up being a “real” track, although short. The rap track has a strong beat and DJ scratching effects and is produced by j-hope himself with the help from Supreme Boi. “There’s a base line in me,” says j-hope and explains “Gratitude for my work is my base.”  The lyrics describe his way to music, how ten years of being a street dancer was his foundation and that his rap is “shaped through the rhythm of my body”. To j-hope it is a track that discusses the essence of him as a person, so no wonder it says, “My music’s dream still remains, so I work hard every day.”

5. Hangsang (항상) Feat. Supreme Boi is a swag rap with a very lit beat and a catchy hook. Hansang means “Always” in Korean, by the way, and the track is produced by Supreme Boi and j-hope. The song is a bit of bragging, actually, now that BTS has become a success despite all the obstacles, “There was no one on our sides, our team came up from behind. Now we’re opening up the world.” He admits that his driving force remains BTS;“The world falls into step with these seven people. We’re always always together” and as he finds it a bit embarrassing to brag, there is also modesty in the song, “With ma label, a foothold. With ma fans, gratitude. With ma team, always.”

6. Airplane is a song even more meaningful to j-hope than P.O.P. pt. 1. as he had an artistic epiphany making it. The beat j-hope made in a hotel room in Chicago and then listened to it on an airplane and while looking at the night sky, the lyrics and the melody came to him. “I thought: this is what being inspired feels like,” he tells on V LIVE and goes on to say that it will remain unforgettable, “I might have reached the peak of my career.” The lyrics tell how j-hope as a kid wished he could fly in an airplane and how he can’t believe that “Now in the very place of dream that was so high, I’m flying over the beautiful world.” The track is about making it and there’s a tongue-in-check dis to his haters, saying that he has flown so much now that “It’s time to console you who didn’t make it yet / I’ll give the flight points as a present.” j-hope asked the other BTS members to sing with him on the song since they’ve worked and toured the world together and they immediately accepted. “I was quite moved,” he says. Produced by j-hope and Supreme Boi, “Airplane” is the second song off the album to have a music video. This is poetical and subdued and a contrast to and comment on the “Daydream” video.

7. Blue Side (Outro) was written three years ago. A blue song inspired by blue sky and wind and lyrics about wanting to love, but not being allowed/able to, so only in daydreams love is reachable, “Inside my blue dream I want to hold you even if you say we can't”. Produced by j-hope, Adora & Hiss Noise.

My own top three consists of Hangsang, Base Line and Daydream, and for the last four song, I like them equally well although they are very different. You can download the entire album for free on Soundcloud or buy it through iTunes. For further information, you should watch J-Hope’s broadcast on the V LIVE broadcasting app.
at March 09, 2018