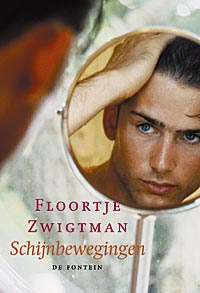 Tricks of the Trade

I’ve just finished reading the most wonderful book and it is of course Floortje Zwigtman’s ”Schijnbewegingen” (Tricks of the Trade). To my big surprise this Dutch masterpiece from 2005 hasn’t been translated into English, and really I don’t understand why. This book should be filmed, it should be made into theatre, it should be on everybody’s lips as it is plain and simple brilliant.
Luckily I read a little Dutch and I read both German and Danish fluently, so I’ve read the book in all three languages (in German and Danish the book has been renamed ”I, Adrian Mayfield”) and I was amazed. I just couldn’t get enough. I have already ordered volume two of the series in German (as the Danes are not going to publish the rest of the series) and volume three in Dutch (as it’ll take a little time before the German translation surfaces).
Few books have made as huge an impression on me as this masterpiece by Floortje Zwigtman. William Faulkner’s “The Sound and The Fury” was one, Elias Canetti’s “Die Blendung” another, not to mention Douglas Adams’ “A Hitch Hikers Guide to the Galaxy”, but with this book I’ve got a new favourite. I just couldn’t put it down and read the entire 500+ pages in one go!

The year is 1894, the place is London and here 16 year old Adrian Mayfield works for a men’s tailor. After a bar brawl he quits his job and tries to figure out what to do next. His father is an alcoholic actor and former pub landlord and his mother - who has left her husband because of his drinking - is a poor seamstress. His older sister Mary Ann works in a music hall and all in all none of them are able to help the street-hardened Adrian. Instead he hooks up with the middle aged second-rate artist August Trops, who introduces him to Oscar Wilde, Aubrey Beardsley and other flamboyant and powerful personalities of the time. Adrian finds work as an artist’s model and slowly comes to term with the fact that he is gay.
Adrian’s life seems to be on track, he even falls in love with a young lord, but then his new friends relocate to Europe for the summer and Adrian is again out of a job. He finds work in a male brothel and learns how dangerous it is to be gay at a time when this was regarded a crime; blackmailers and the police being your worst enemies.
In the end Adrian has to choose between his integrity and his fears, his flamboyant friends and the outraged bourgeoisie and last but not least true and false love.

Floortje Zwigtman has won several prizes in the Netherlands, and the book “Schijnbewegingen” has seen her compared to Charles Dickens. Although they both are brilliant writers describing Victorian England, the comparison doesn’t do Zwigtman justice. Where Dickens tended to be both bleak and sentimental, Zwigtman doesn’t overdo thing, neither in the positive nor negative direction. There’s no sensationalism there, she just tells things as they are; raw, sharp and to the point. And yes, that includes describing gay bashing, male prostitution and explicit gay sex. Could that be the reason why the book has never been translated into English? I sure hope not, but I suspect it to be the case. Shame on you, British publishers! We’re in the twenty-first century now and you have to realise that straight people like me are fully capable of enjoying works about gay people like Adrian Mayfield! The film and television industries seem to have got the message, isn’t it about time, that you get it, too?
In 2005 “Schijnbewegingen” was named youth book of the year by the Dutch booksellers and that is probably part of the problem. The book fully deserved the title as book of the year, but really, the book isn’t just a youth book, if it is a book for young people at all. This isn’t an ordinary coming of age book, it isn’t even a book about coming to terms with your own sexuality, it is first and foremost a masterly journey into late ninety century London, its artists, its atmosphere and its dark sides. It is a realistic novel based on thorough research, but it is also an entertaining novel, a compassionate novel and one that’ll give you food for thought. I can’t wait to read the next volume!

When Muse hit the Orange stage at Roskilde Festival in Denmark Saturday July 3rd, the 40,000 people strong audience was in for a treat. The band was on fire and proved once more, why they are regarded one of the best live bands around these days.

Muse played all the songs that people were there to hear: Uprising, Super Massive Black Hole, Undisclosed Desire, Resistance etc. etc., actually it felt like listening to one long chart show! An obvious proof of Bellamy’s brilliant song writing talent. Between songs the band played snatches of The Animals’ House Of The Rising Sun, Led Zeppelin’s Who Knows Who, Nirvana’s School and Rage Against The Machine’s Maggie’s Farm and that just spiced up the concert even further. The highlight came when Bellamy decided to play his guitar behind his head, Jimi Hendrix style, during Plug In Baby.

Hit upon hit of symphonic rock were thrust upon the enthusiastic audience, who showed their appreciation by singing along, jumping, clapping, waving flags and all in all enjoying this unique experience on a perfect summer night. When Muse went off stage around midnight, no one was in doubt that the British band is the top of today’s progrock. What a blast of a concert! 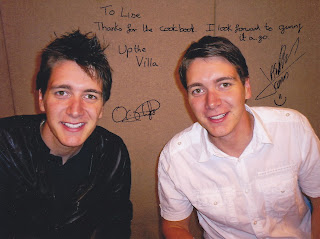 I'm a bad blogger, a very bad blogger! I haven't been on for 6 months! Today it is exactly 6 months since I wrote here last and I feel very much ashamed! The thing is that I've been blogging in other places. My Space is one, my homepage another. It's no excuse, I know, so from now on I promise (fingers crossed, haha!) that whenever I blog in other places, I blog here as well. So...from now on this place is no longer the kind of diary-thingy that it used to be, but a genuine blog, because let's face it: there is no need for diaries, since twitter came into our lives!

When that is said, I want to close the whole "Oliver Phelps used my pic as his twitter profile pic"-thing I had going. He used it for exactly 6 months (thank you SO much xx) and today, well, today I received a signed copy of the entire pic (which was of his brother James as well). Aww....they really are lovely blokes, aren't they? James signed it although he isn't an Aston Villa fan like Oliver and me and Oliver liked the cook book I had given him. Awww.....

Oh well, look out for blogs here on music, art, books, events and just odd happenings in my life. Hope to see you around and feel free to leave a comment!
at July 03, 2010 5 comments: