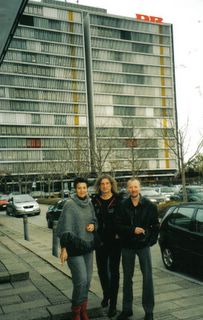 Here you can see the DR building... 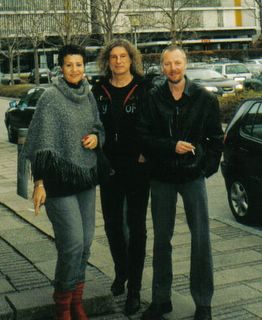 ...and here you can actually see the people!

Last week I went to the Danish National Television DR to see what they'd got on Slade in their archives. I'd asked Don and Hanne to join me and in the end Mikael Helmuth of the Team Theatre wished to come along as well. It was quite an outing, although the archives didn't hold as much footage as promised. One live performance from the Westfalenhalle in Dortmund, Germany, 1981, they didn't have after all, another live performance from Danish TV turned out to be one from Top Of The Pops and finally two of their videos were the same, namely "My Friend Stan". We had a nice time anyway, although it was a long drive. Well, at least we got to get more or less lost in the long corridors of the TV station and we also had a nice lunch in their cafeteria.
I really enjoyed myself and when I came home that night, the house was still standing, although my sister was to look after Tea for the very first time. My sister is not very keen on children, but Tea had solved the problem by visiting a girlfriend who lives a little further down the road. So it was only my sister who was there when I got home.
Anyway, I had a great day, guys. See you soon.
at November 17, 2005 No comments:

Whatever happened to the violin?

Whatever happened to your violin?, people sometimes ask as it was the violin that started all of my blogs in the first place. Well, the violin is fine, more or less. My daughter somehow managed to bump into it some time ago, so the bridge came out of place, but it is fixed now. At the moment I'm playing Bach, Offenbach and Slade. Not a bad mixture, I tell you. I'm not sure that my neighbours feel the same, though!
My daughter sometimes says that she wants to play the violin, too. Well, I don't think that a violin would last long in her hands and besides, small scale violins are so absurdly expensive. I'm contemplating buying her a keyboard instead. She has a toy one, and she can actually play small tunes on it. The other day I caught her playing the violin-part of Slade's "'Coz I Luv You" on it while singing some Kylie Minogue-hit: "La-la-la..." Interesting combination…
at November 03, 2005 2 comments: