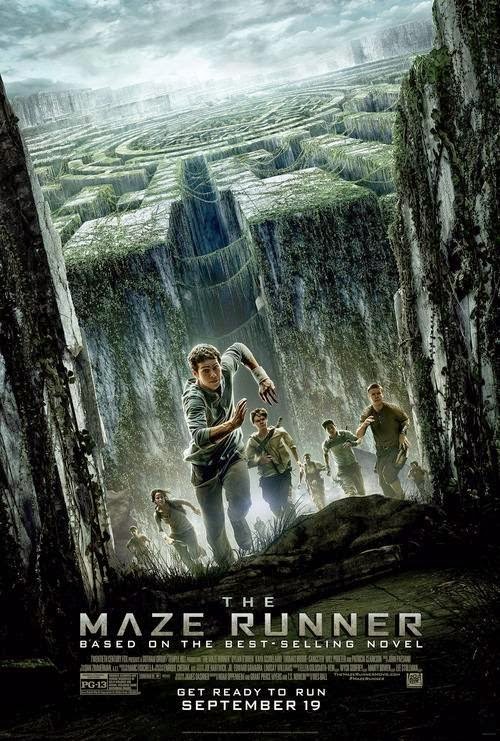 Last week I was invited to the Danish premiere of Wess Ball’s film “The Maze Runner” and I brought along my teenage daughter who fits right in with the young adult target audience.

Usually when I’m going to a premiere I do a bit of research in advance, but I didn’t this time and that was a huge mistake. You see, when entering the cinema, I didn’t know that “The Maze Runner” is based on the first book in the young-adult post-apocalyptic science fiction trilogy by James Dashner and thereby had no ending, and that was a great disappointment for me.

Anyway, “The Maze Runner” tells quite an exciting story about the teenage boy Thomas who wakes up in a glade with no memory of his previous life. Here he meets the Gladers, other teenage boys who arrived in The Glade in the same way as Thomas, some as long as 2 years ago, but now they live in a community where they farm the land of The Glade.  The Glade is situated in the middle of a giant maze, and some of the boys called “Runners” explore the maze during daytime in order to find a way out. However, at nightfall the maze closes its doors to The Glade and no one is able to survive a night in the maze when it is roamed by giant robot insects called The Grievers. Thomas, who has strange dreams about a mysterious organization known as W.C.K.D, wants to become a maze runner and at one point, the first and only girl turns up in The Glade and sparks off the action.

Thomas is brilliantly played by Dylan O’Brien and worth mentioning are also Aml Ameen as the Glade leader Alby, Blake Cooper as Thomas’ friend Chuck, Ki Hong Lee as the maze runner Minoh, Will Poulter as the broody Gally and especially Thomas Brodie-Sangster as the second in command Newt. They are all very talented, but the maze itself is a bit disappointing, as I had hoped for different scary creatures and things to happen and not just Grievers. Furthermore Thomas’ background and the post-apocalyptic story behind the plot is a bit flimsy and easy to figure out and frankly a bit of a disappointment when you’ve waited to get out of that maze for 113 minutes (the audience) or 2 years (The Gladers), whatever seems the longest.

I really liked “The Maze Runner” up until the last 15 minutes or so as they were very disappointing, and I felt cheated when I left the cinema. However, I do realise that it is partly my own fault for not knowing that this was a “Part 1”-film, but then again it’s the fault of the film too, as the maze was just too boring! I’m not sure if I’m going to see part 2 and 3, so for now I’m just going to give part 1 three out of three stars: ***
at September 18, 2014 3 comments:


Usually I review the annual Odense International Film Festival (OFF), but this year I don’t feel equipped to do so. You see, in the past couple of years it has been increasingly difficult to get to get a seat at the free festival screenings because schools and kindergartens were able to pre-book seats whereas other people were not. Then when you turned up at the cinema, all the seat were already taken, and you could just leave again. This year, however, everybody were able to pre-book seats, but contrary to the intention, it just made things worse. Now everybody pre-booked, so when I tried to pre-book too 2 weeks before the festival, almost all of the seat were taken. I only managed to get one ticket to one competition screening out of twenty. That’s just not good enough, but at least I managed to get tickets to 3 different non-competition screenings as well. 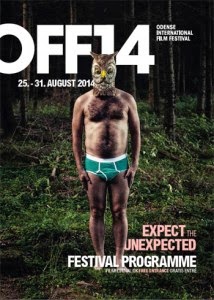 Even though the slogan of the festival is “Expect the unexpected”, I didn’t expect not being able to get a seat, but because of this, I can’t review the short films, documentaries and animations of the competition as I only saw 5 of the 100+ entries. I can bring you the names of the winners, though, and they were:

As you can see, all of the winners were either Danish or French apart from the Hungarian international Grand Prix winner. I have no idea why. Of all the award-winners, I’d actually seen two at the single screening I was able to attend, namely The Boerge Ring Award winner “Life with No Tricks” by French Anne-Laure Daffis and the Children and Audience Award winner “Helium” by Danish Anders Walter. The first one was a ha-ha-funny animation that made fun of the death of Princess Di (this would never have won anything in the UK!) and the second a brilliant, warm and magic film about a dying child. I’m sure you can hear where my sympathies lie and I was one of the many who voted for “Helium” to get the Audience Award. 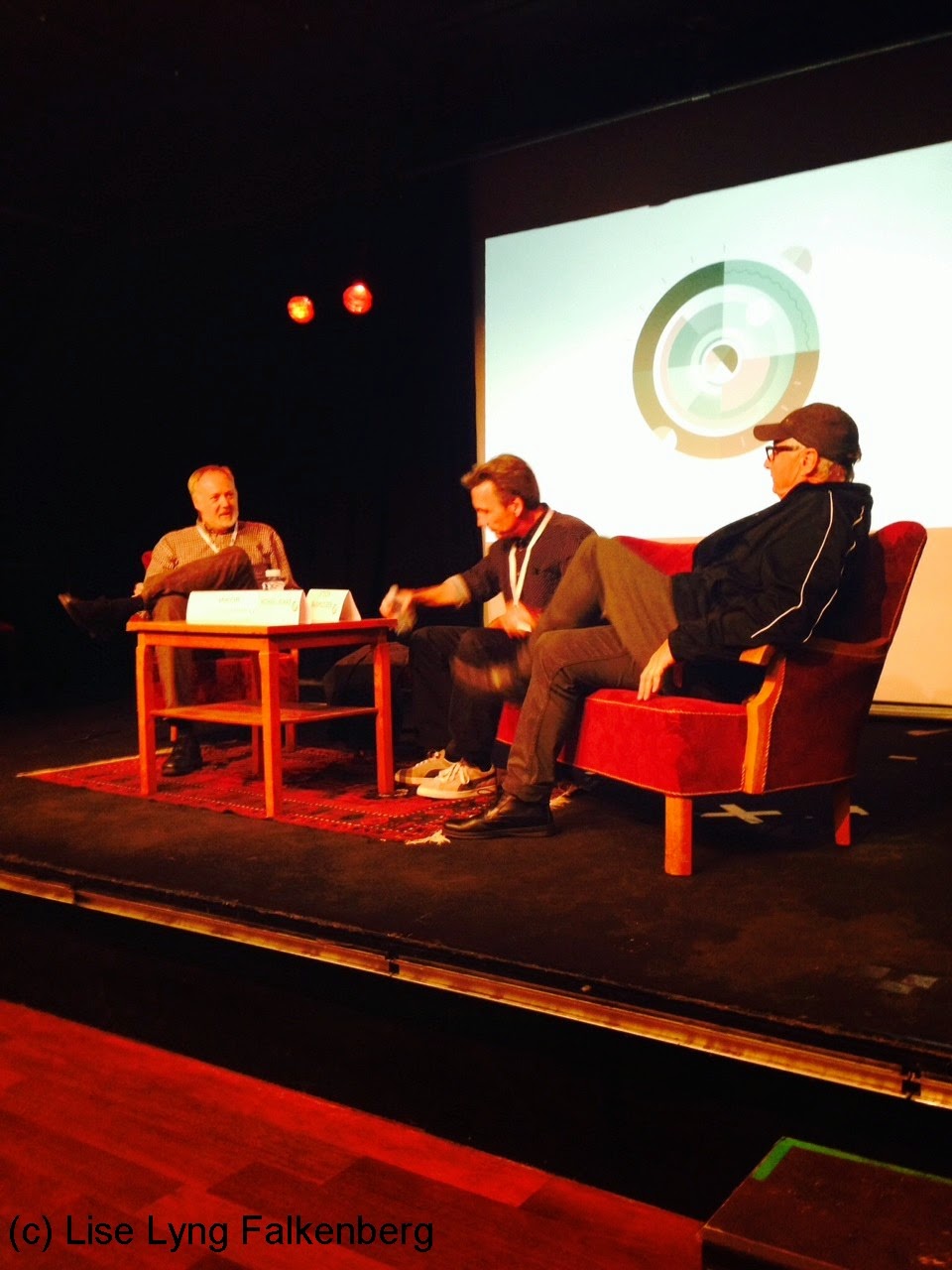 Anyway, the non-competition screenings this year were of a much higher standard than usual and I was happy to attend three of them. The first was called “Magic Unfolding” and here the audience met Danish directors Michael Wikke and Steen Rasmussen as well as Danish animation expert Jacob Stegelmann for a 1 hour discussion of the work of the Japanese master of animation, Hayao Miyazaki, followed by the screening of Miyazaki’s last film “As the Wind Rises”. As a huge fan of Stegelmann, Wikke & Rasmussen AND Miyazaki, I was thrilled to get a seat in the crowded “Pejsestuen”-venue and the discussion was funny, intelligent and enlightening. However, half of the audience as well as Stegelmann and Wikke & Rasmussen left before the screening of the film, and for us who sat through it, it was clear why. “As the Wind Rises” is far from Miyazaki’s best; at least you have to love airplanes, war and tragic endings a lot, if you are to like it. I don’t and I would rather have seen “Spirited Away”, “Howl’s Moving Castle” or even “My Neighbor Totoro”. 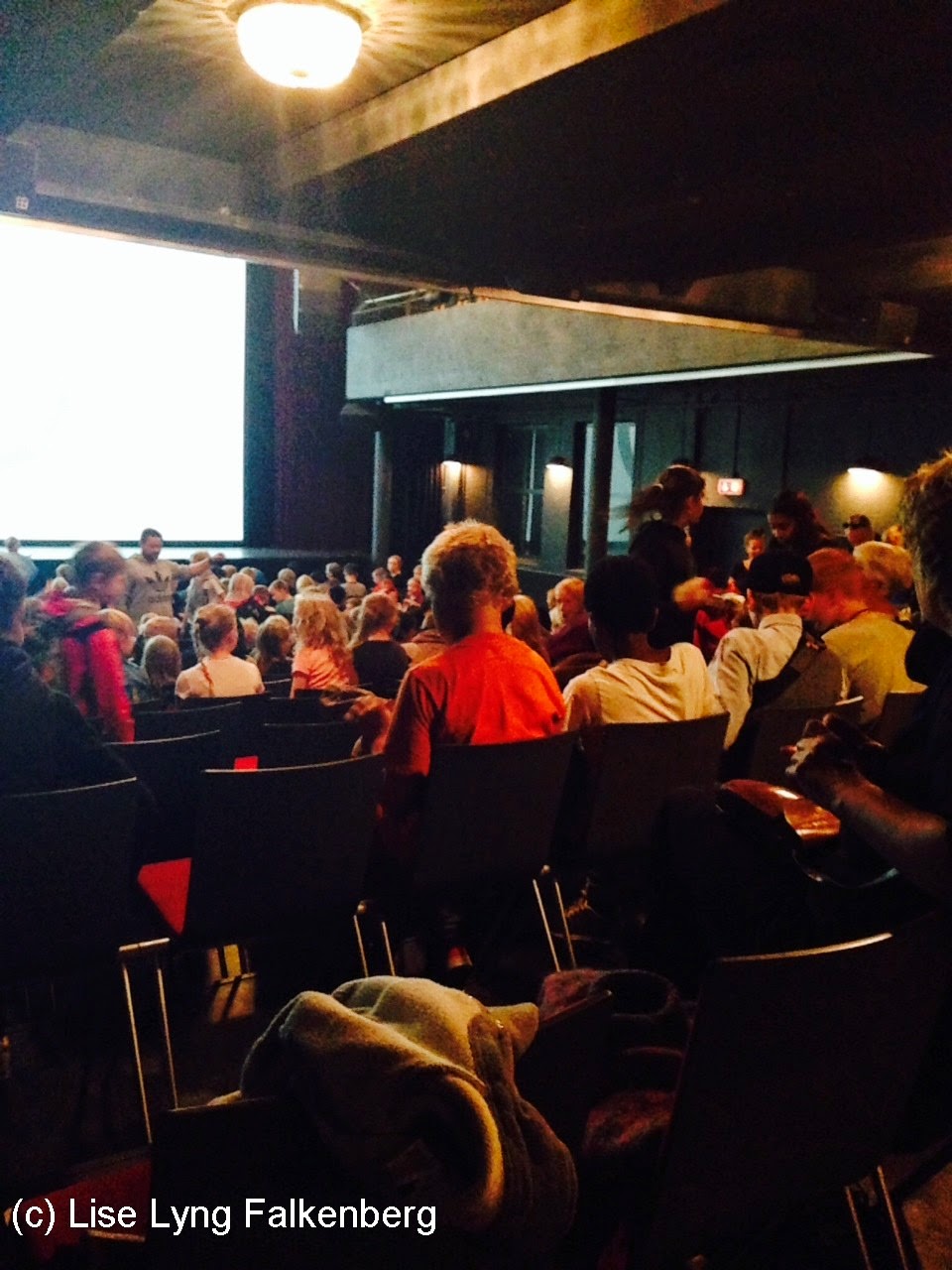 The second off-competition event I went to was the screening of six of the best films from Copenhagen’s Buster Film Festival for Children and Youth. These films were aimed at kids 8+ so the huge “Magasinet”-venue was packed with school classes. I guess that of the 200+ seat, only 5 or 6 had a bum in it that didn’t belong to a school kid, so I was glad that one of them was mine. The films were brilliant, especially the aforementioned “Helium”. 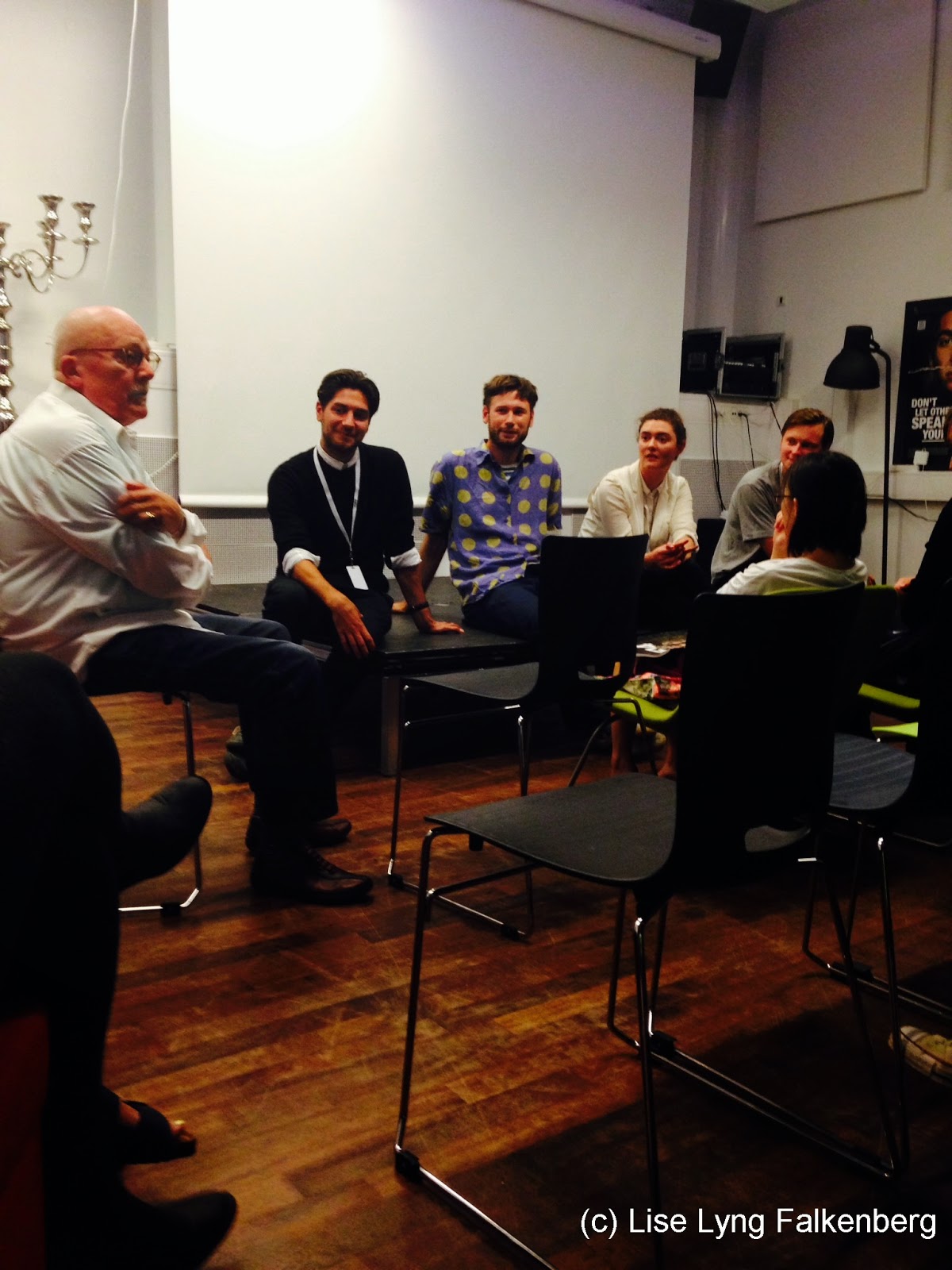 The last of the off-competition events that I managed to get to was the screening of six films made by the 2014 animation director graduate students from The National Film School of Denmark. Most of them were remarkably good, especially William Reynish’s “Whole” and my personal favourite “Recording Louis” by Kristian Nordentoft. Also the history driven puzzle adventure game for iPad, “The Last Day at the Plant” by Dennis Nielsen seemed very interesting. Four of the young directors were present during and after the screening so you were able to ask them questions and the whole event was moderated by the very entertaining film expert Ulrich Breuning. This was a lovely surprise as I had missed him moderating the annual “Old Theatre” screening of old silent films, as I couldn’t get to the venue due to lack of public transportation in Odense city after 4.30 p.m. The screening of the graduate films were during daytime, though, and in the small “Studenterhuset” venue where some of the seats were actually empty! 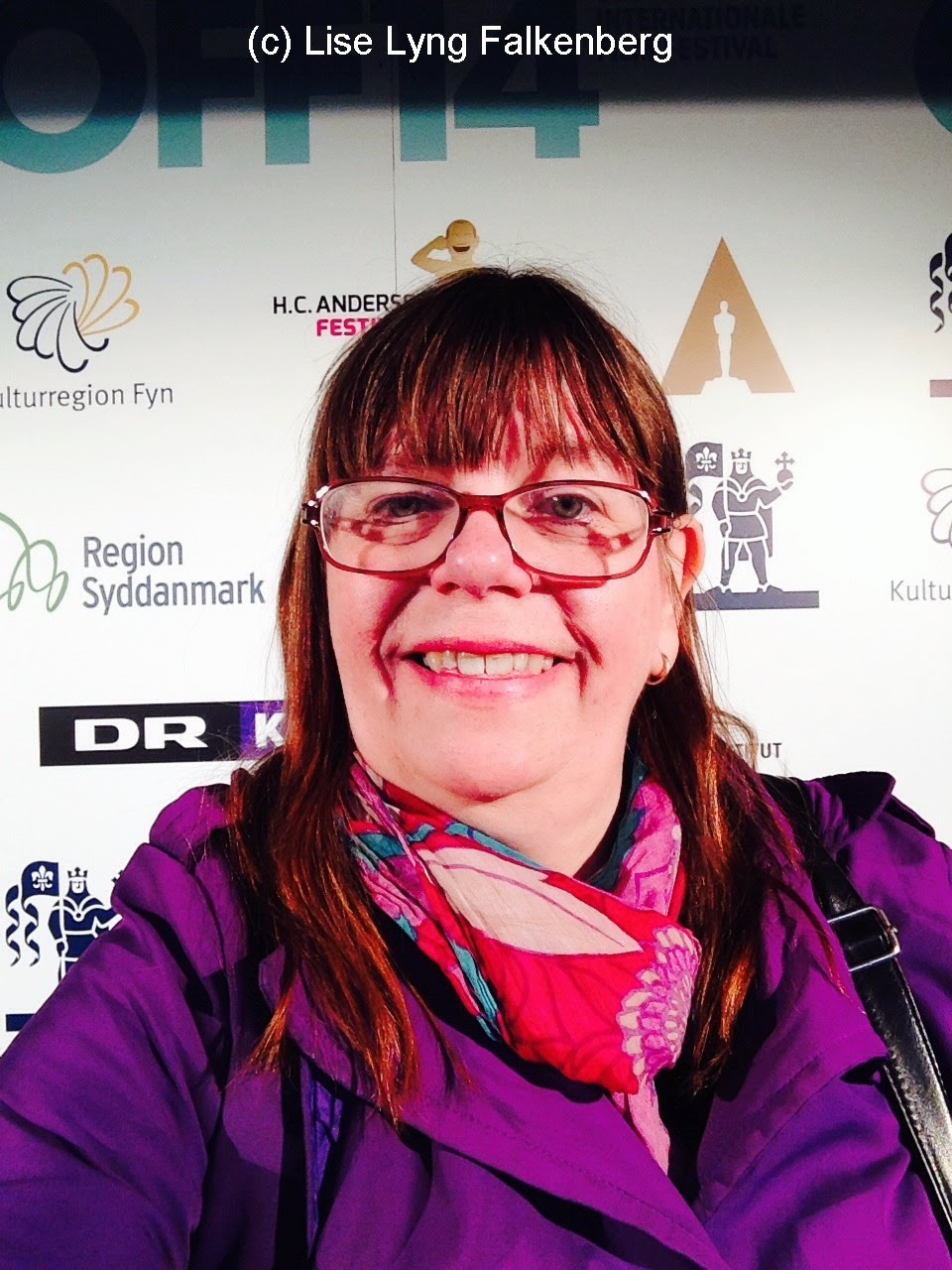 Well, considering that I hardly saw any films, I’m surprised that I managed to write an OFF14 review anyway. To sum up, this free film festival is brilliant, but it has outgrown its physical limits as the audience is rejected even before it reaches the door. If OFF doesn’t want to move to bigger venues outside the city centre, they should at least hold separate screenings for schools and kindergartens, thereby giving the rest of the audience a chance to get a seat. This is after all not a film festival for children and youth, although one of its competitions is in the children/youth category. At least it is safe to say, that unless OFF has more room for reviewers next year, this is sadly going to be my last Odense International Film Festival review.