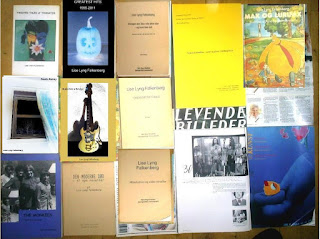 When I finished my Ph.D. in Comparative Literature in 1991, I felt like I would never read a book again! I'd read so many books the past 7 years in so many languages, that reading no longer appealed to me. But since 2009 I've started reading again and so far 2012 was the year where I read more books than ever since 1991. I read novels, poetry, manga, books for children, non-fiction etc. etc. and I read books in both English and Danish - but no German this year! Here's a complete list:

Some of the books were quite new to me, others I've read a million times. Apart from my own books, the ones I return to most often are the books by the Danish impressionist author Herman Bang (1857-1912). His books are just wonderful and he's among my five favourite authors (myself not included), Hans Christian Andersen, Soren Kierkegaard, H. C. Branner and Knud Holten being the other four. If you're able to get hold of any book by Herman Bang, read it! You won't regret it.
Other than that my favourite book this year was Agustin Gomez-Arcos' "The Carnivorous Lamb". This brilliant, black humour family saga of love, power, politics and decadence thrilled me to bits and I'm sure I'll read it again. And again. And again!

Hopefully 2013 will bring as many literary highlights as 2012 did!