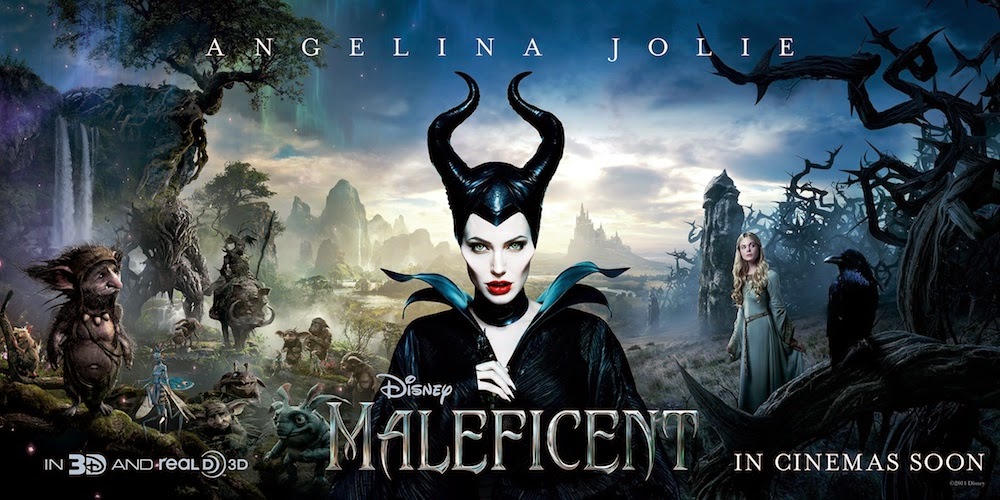 Last weekend I took my 15 year old daughter to see Robert Stromberg’s film ”Maleficent”. Although she isn’t as keen on fairy tales as me, we both ended up enjoying ourselves, as this is a fairy tale with a twist.

Based loosely on “Sleeping Beauty”, the film tells the story of the malevolent fairy Maleficent (Angelina Jolie) right from her childhood where we learn that she isn’t malevolent at all, just hurt and rejected. The real villains are the two kings, Henry (Kenneth Cranham) and Stephan (Sharlto Copley). The sleeping beauty, Princess Aurora, is nice but colourless in the shape of Elle Fanning, who is totally upstaged by her 5 year old self played by Angelina Jolie’s real daughter Vivienne Jolie-Pitt. The three good fairies, Flittle (Lesley Manville), Knotgrass (Imelda Staunton) and Thistlewit (Juno Temple), are in charge of the comic relief, but the film is all about Angelina Jolie, sorry, Maleficent. The only other character with just a little bit of weight is her assistant and confidant Diaval (Sam Riley) in his many shapes as man, raven, wolf, dragon etc.

“Maleficent” is a true CGI film with beautiful and spectacular scenes from the magic Moors, but most of the time the CGI is used to create big battles, dark woods and the bleak castle. It seems a trend to use CGI to create dark, gloomy and violent scenes instead of magic, enchanting and beautiful ones, and personally, I think it’s a bit of the shame. I did, however, appreciate that the set designers remembered that the Disney film logo is in fact the Sleeping Beauty castle and as such it appears in the film, although it is dark and not pink as it should have been.

As “Maleficent” is a fairy tale with several twists it didn’t quite follow the usual “Sleeping Beauty” story, and some of the changes are good, others are not. In the film it is Maleficent herself who changes the curse on Sleeping Beauty from death to sleep, so the wish of the last good fairy, which is usually the one that saves Sleeping Beauty’s life, is never being uttered and that seems weird, as the princess could easily have done with more wishes. It seems even weirder that Sleeping Beauty doesn’t sleep for 100 years in the film, but rather for 10 minutes. It totally ruins the original story and the byname Sleeping Beauty, who has now become The awake Beauty.

Anyway, the story isn’t about Sleeping Beauty but about Maleficent and as such it is a very feministic film, showing sisters doin’ it for themselves. There is no need for men, in fact the main moral of the story is that romantic love between man and woman is not true love and that true love only exists among friends, children/parents and the likes. I think this is a very brave and refreshing moral that I haven’t seen before in a fairy tale

All in all this 98 minutes fairy tale is a magic and amazing CGI film, but it seems weird that the moral is feministic when the CGI is used mainly to make dark, violent “masculine” scenes. Besides, the film is much more about Angelina Jolie than the plot, so I can only give it 3 out of 5 stars: ***
at June 14, 2014 2 comments: 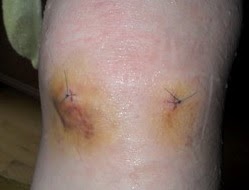 Since July 2013 I haven’t been well and in October I had x-rays and was diagnosed with osteoarthritis in my knees. In November last year I then tore the meniscus in my left knee so that I’ve had difficulties walking ever since. In fact I could only walk a few minutes at a time and only with the aid of a rollator or a walking stick.
Despite the “fantastic” health care system in Denmark, I had to wait 7 months to get my knee scanned and another 3 weeks to have surgery. Finally on May 21st I had keyhole surgery in a private clinic, as my doctor had given up on the public hospitals by then. Because of the indecently long waiting lists, he was able to finally transfer me to a private clinic free of charge, and surgery only lasted 30 minutes with local anesthesia. Everything went well, except there was a lot more wrong with my knee than could be seen on the x-rays and MRI-scan.
Apart from the meniscus tear and the osteoarthritis, I also had a ligament-tear, several swollen, inflamed mucous membranes and worst of all: severe cartilage damage. Actually the bone in my knee is exposed several places. Much of this could have been avoided had I had surgery straight away instead of having to wait for almost 8 months, so I am to formally complain to the National Health Service now.
Anyway, I'm able to bend and stretch the knee again, but it’ll take maybe 2-3 months, before I will be able to walk "normally" again and some of the pain is never going to go away, but at least I'm on the right track now. This means that I’ll be able to update my blogs again, so please stay tuned! Thanks for your patience.
xxx
Lise
at June 06, 2014 4 comments: