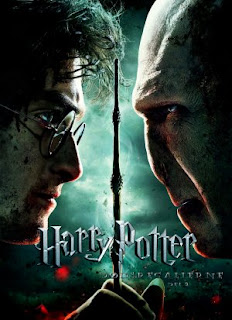 “Harry Potter and the Deathly Hallows” part 2 is the last film of eight in the saga of Harry Potter. In other words: it is the one to end it all. There has been a lot of hype about it and it is has been mentioned as the epic ending of an era and in a way it is, but…

The plot
I saw the film on July 13th, 2011 at the first screening on the first day of its release here in Denmark. Although the screening took place in a small cinema that seated only 135 people, less than 50 turned up, mostly young kids and teenagers and the press, some there to review the film, others to interview the audience. It was rather annoying, especially as the press photographers kept photographing the audience during the first fifteen minutes of the film.
When we were finally able to watch the film without the irritating click-click-click noises all the time I was… No, I won’t say I was disappointed, but that’s because I’ve come to expect very little from the HP films since David Yates took over directing the saga in 2007 with HP5, “Harry Potter and The Order of The Phoenix”. Since then the Potter films have lost some of their magic (at least for me) as Yates has a way of jumping from scene to scene without any explanation and leaving out the insights into and depths of the characters that should hold the scenes together. HP7 part 2 is no exception.
In “Harry Potter and the Deathly Hallows” part 2 Harry Potter (Daniel Radcliffe), Ron Weasley (Rupert Grint) and Hermione Granger (Emma Watson) are still out to find and destroy Horcruxes, the objects in which the evil Lord Voldemort (Ralph Fiennes) has hidden parts of his soul. That leads to a huge battle at Hogwarts School of Witchcraft and Wizardry, a battle that takes up 70 of the film’s 130 minutes. The battle is the main story of the film and in fact, the two first stops at respectively Shell Cottage and Gringotts Wizarding Bank would have been better placed in “Harry Potter and The Deathly Hallows” part 1. They seem a bit out of place in HP7 part 2, although the Gringotts scenes are among the best in the film. Like in the book, the film ends with a “19 Years Later” epilogue, rather pointless, but necessary as there is a certain feeling of emptiness after the battle.

The cast
I don’t know what to say about the cast this time, I really don’t, as most of them don’t even have lines, but just run around in the background. The focus is on Harry, Ron, Hermione and Voldemort and apart from them only Dumbledore (Michael Gambon), Snape (Alan Rickman), Luna Lovegood (Evanna Lynch) and Neville Longbottom (Matthew Lewis). have lines of real importance.
At one point in the books it wasn’t clear if The Chosen One was Harry Potter or Neville Longbottom and when you watch HP7 part 2 you get to wonder as this film is truly Neville’s. Next to Harry he is by far THE most important character and Matthew Lewis portrays him so well. Very convincing. The only other actor I noticed was Maggie Smith as Professor McGonagall. She’s just brilliant. The rest of the cast never really gets to show their skills, but that has been a problem ever since David Yates took over directing.
As for my own favourite characters, the Weasley twins, they are hardly in the film. George Weasley (Oliver Phelps) has two lines and Fred (James Phelps) says one single word and that’s it. As far as I understand, the scene in which they speak wasn’t even in the original script, but the Phelps twins were called back to adlib it, as otherwise they wouldn’t have had any lines at all. To me it was sad to see these great characters more or less reduced to extras.

True to the book
A good thing about “Harry Potter and the Deathly Hallows” part 2 is that it stays true to the book. The few twists and turns it takes are mostly good and the events at Gringotts and the first big battle at Hogwarts are truly epic. Unfortunately the second battle (well, you can hardly call it a battle as we only see two duels!) and Snape’s last scene are not epic at all and not what I had expected from reading the book.
Another thing I had looked forward to was the return of the prodigal son, Percy Weasley (Chris Rankin), but that scene doesn’t exist in the film. Percy is just there, no explanation given, and that’s another ongoing problem since Yates got on board. Things are not properly explained. For instance we hear Remus Lupin (David Thewlis) talk about his son, but in the films we have never learned that he and Tonks (Natalia Tena) had a baby! It’s like in HP6 when they were suddenly married without the audience having heard about their love affair. Pretty confusing if you haven’t read the books.
Instead of Remus talking about his son I would rather have had the film dwell on the deaths of some of the main characters and the reactions from their loved ones, but unfortunately the film is true to the book here as well. Suddenly a number of people have died and we never learn how. In fact not even the long awaited “death by wall” incident from the book has made it to the film. We never get to see it! Very frustrating.

The end
Seeing the Harry Potter saga coming to an end with “Harry Potter and the Deathly Hallows” part 2, I must admit that I had hoped for something else. A more epic ending and an ending that left the audience satisfied when it came to say goodbye to the characters who we have come to know and love through these films over the past ten years. In that way I am disappointed. I never got to say goodbye to the Weasley twins or to Percy. Or to Mr. and Mrs. Weasley, Hagrid, Professor McGonagall, Professor Flitwick and a lot of other characters that had come to mean something to me. And the goodbye to Lucius Malfoy was just so wrong! The only good goodbyes were actually the ones to Dumbledore, Neville and Luna. As for the main characters (the ones in the epilogue), it was a strange goodbye as it showed a status quo, a return to the past disguised as future where the only thing that had changed with the battle against Voldemort was the reputation of a certain Slytherin.
It is always sad to say goodbye, but it is even sadder if you are not allowed to part properly. I guess it has to be this way as HP7 part 2 remains true to the book in the end, so allow me to say my own goodbyes. Goodbye George, goodbye Fred, goodbye Percy, Snape, Lucius, Remus, Sirius, Mr. and Mrs. Weasley, McGonagall, Luna, Ron and the rest. I’m sad that most of you were reduced to extras so I didn’t get to see you shine for the very last time. Goodbye Harry Potter.
Three out of five stars: *** 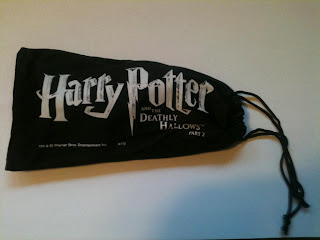 P.S. I saw the film in 3D and although it isn’t used for much except for in the Gringotts “roller coaster” scene, I like the special Harry Potter 3D glasses that the cinema handed out. Too bad that they are too small to wear for people like me and Harry Potter who already wear glasses, but the bag is neat!

Do you mind if I quote a couple of your articles as long as I provide credit and sources back to your blog?
My website is in the exact same area of interest as yours
and my users would really benefit from some of the information you present here.

Please let me know if this okay with you. Appreciate it!