“BTS World Tour: Love Yourself in Seoul” is the very long title of a concert film by the South Korean group BTS that debuted back in 2013. The film is co-produced by Big Hit Entertainment and CJ CGV Screen X and available in both 2D and ScreenX formats. It was filmed during August 25th and 26th, 2018 in Seoul, South Korea, which were the two opening shows of BTS’ “Love Yourself” world tour that took them to North America, Europe and Asia and they still have a couple of dates left of the tour in Japan, Hong Kong and Thailand.

The “Love Yourself” title of the tour sounds a little complacent to some, but that is not at all the message that BTS want to convey. BTS are known for their political, social, cultural or otherwise relevant lyrics and messages and “Love Yourself” has been the keyword for their last three albums. Here they examine subjects such as low self-esteem, self-hate and changing yourself to become what you think others would prefer and at the same time they give off positive messages of self-love, of standing up for yourself and being proud of who you are. They have even collaborated with UNICEF on a “Love Myself” anti-violence campaign for making the world a safer place so that children and teenagers will be able to live happy and healthy lives without fearing violence. 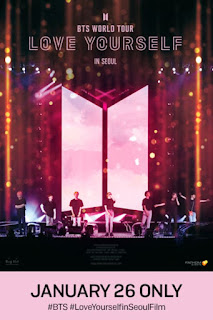 I must admit that I have been rather annoyed at how the film has been mentioned in the press. Reading reviews and seeing footage from cinemas in especially the western world, one should think that BTS is a teen phenomenon with hordes of screaming and fainting teenage girls invading the cinemas, singing, dancing and waving around their fan light sticks called “ARMY bombs” as BTS fans are called ARMY. Of course, this kind of behaviour sparks interest with the press as you can then report about obsessing fans and draw parallels to One Direction and other boy bands. The problem is, though, that BTS are not what you’d normally call a boy band, they are not even an ordinary Korean idol band as they are in control of their own career and write and produce their music themselves. Their fans are not like OD fans, either, as they come in all ages, genders, nationalities etc. and if you want to draw parallels to other bands, do it to the Beatles instead as this is the level that BTS is on when it comes to popularity, influence, and creativity. It is not without reason that they were invited to and spoke in the UN last year and have been on the cover of TIME Magazine as “next generation leaders”.

BTS themselves are aged twenty-one to twenty-six and their core audience is in their twenties and thirties. Furthermore, nowadays there are more fans in their forties and up than under twenty. Because of this, the concert film was received like any other film in most cinemas: with quiet, non-light stick appreciation. With this, I’m not saying that reports about noisy and over-obsessing teenagers in cinemas are fake, they were just not the norm.

As we don’t have ScreenX cinemas in my country, Denmark, I saw the film in 2D in a cinema in Denmark’s third-largest city, Odense, with my usual gang of local BTS ARMYs who range from teenagers to people my age (I’m 56) and although the women outnumbered the men in the audience in general, there were men too, whereas the screaming and the light sticks were missing. In fact, light sticks were prohibited as they would have affected the screen, and the youngest audience kept the fan chants of the BTS members’ names and their screeches of delight, if a member happened to show an inch of bared skin when dancing, to a minimum. Instead ARMYs showed themselves from their best side, and in the lobby some of them even handed out free chocolate with homemade photos cards of the BTS members and encouraging messages to the audience. 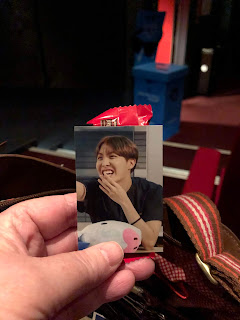 The concert film as such was very good, beautifully filmed and staged, altering between stage shots and close-ups of the seven members, who perform under the names RM, Jin, Suga, J-Hope, Jimin, V and Jungkook.

The concert opens with the latest BTS-hit “IDOL” and works its way through twenty-seven songs (five of them bundled together in a medley) and no less than six costume changes. BTS show their famous, synchronized dancing and top level energy during group songs, the vocalists consisting of Jin, Jimin, V and Jungkook harmonize beautifully in their vocal unit song “The Truth Untold” and the three rappers and main song writers of the group, RM, Suga and J-Hope, come across fiercely and brilliantly in the rap unit song “Outro: Tear”. Furthermore, the members each have a solo song that highlight their different strengths and skills.

As such I would probably have found the “BTS World Tour: Love Yourself in Seoul” perfect if it wasn’t for one thing: I have seen BTS live. I was lucky to get a ticket to their “Love Yourself” concert in Berlin on October 17, 2018 during their first ever Europe tour, so I know all the things that were missing or just not as good as they are live. 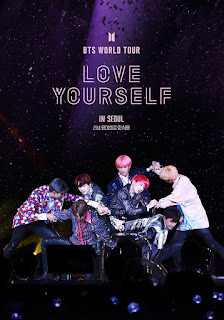 Firstly, the concert film lasts 112 minutes, which is thirty minutes shorter than real BTS concerts in the west and, according to reviews, a full hour shorter than their Asian concerts. The reason for this is, that both the members talking to the audience between songs and the incorporated videos that are part of all BTS concert have been omitted. I have no idea why, as it is not to save money for subtitles, because although the film isn’t subbed in the US and Europe, it is in other parts of the world. All I know is that the videos, which are there to give the members time to change costumes, are both funny and moving and the talks are extremely essential to every concert. This is where BTS address their audience and greet them in whatever language is spoking in the country of the performance and where group leader RM gives his famous speeches that vary from concert to concert, but always stay interesting and relevant as he is a both rhetorical and philosophical genius with an IQ of 148.

Secondly, using the first two of forty-two concerts for the film is probably not the best idea, as the concert hasn’t found its best and final form, yet, as everything is still new to both the artists and the staff working on the concert production. Some of the choreography in the opening shows was different from when I saw BTS live three months later, Jimin didn’t have all of his costumes, yet, so the cinema goers didn’t get to see his beautiful solo costume as well as other costumes, the camera operators weren’t always in place for the highlights on stage, and BTS didn’t seem to have as much fun on stage as they did on later tour dates, maybe because everything was still new or because it has been omitted from the film.

Thirdly, the concert(s) were held in Seoul Olympic Stadium to a combined audience of 90,000, a number that was only matched on a few other Asian dates, although BTS could easily have pulled as many fans in both the US and Europe. I do understand why their company Big Hit Entertainment wants to show how big a crowd BTS attract, but it also means that what the audience see in the cinema is not what they can expect to see in concert. Among other things BTS use a second stage and a movable platform to get between the two stages in the film, thereby skipping some of the best choreography from the concert as they can’t dance properly during transportation.

Finally, if you have seen a “Love Yourself” concert live, you’ll know that BTS use different medley songs and encore stage clothes if they give two concerts in the same city and the medley in the film is from day two, whereas the white T-shirts in the encore stage is from day one. This ruins the illusion of the film being a documentation of a single concert and it only makes things worse that on the posters, BTS are wearing the black T-shirts from day two, which are nowhere to be found in the film! 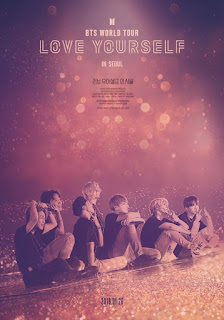 I know that these are minor objections and I am sure that to people who have never seen BTS live, this concert film must be amazing. You see how hard the group members work and how talented they are, both close up (like on the big concert screens at live concerts) and from far away (as if you are sitting in a seat at a concert), and then you finally get to know how they come across on stage, which for some is very different from how they come across on social media. Here I must, of course, mention my favourite, J-Hope, who changes the most.

J-Hope is a former prize-winning street dancer and probably one of the best dancers of our time and ARMYs who have never seen him live perceive him as a happy, sunshiny and cute person. There is the saying, though, that you don’t know J-Hope unless you have seen him live as his stage presence is immensely strong, sexy and charismatic and far from his goofy, funny image. Rest assured that many ARMYs left the cinema with a new bias (favourite member) because of his solo number “Just Dance”!

Besides J-Hope, especially the dancer and vocalist Jimin, owns the stage in the concert film along with the rappers Suga and RM, whereas the three other vocalists Jin, V and Jungkook play more subdued parts, especially V who is normally extremely visible on SNS. Even Jin’s stage event is missing from the film, or perhaps he hadn’t invented it yet, as during the tour he’s had a recurring ARMY bomb event to match his 2017 “Wings” tour heart event. On the other hand, I finally got to see Jungkook dance on stage, as when I saw BTS live, Jungkook had injured his foot, so he sat down during the concert.

As expected, the three youngest, Jimin, V and Jungkook, got the most reactions from the young part of the audience along with the second-oldest member, rapper Suga, who despite his swag and cool image, is very charming and endearing on stage. 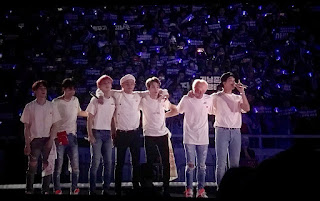 “BTS World Tour: Love Yourself in Seoul” was supposed to be a one-day-only event, the concert film playing worldwide in cinemas on January 26th, 2019, where it broke the record for “Largest Worldwide Event Cinema Release” after being screened in 3,800 cinemas and 95 countries. Because of this, new dates have already been added like it happened with last year’s “Burn the Stage: The Movie”; the 86 minutes poetic, retrospective behind the scenes documentary about BTS, which again was based on their amazingly honest and gritty eight-episodes “Burn the Stage”-series on YouTube filmed during their 2017 “Wings” tour.

If you want to see the concert film, “BTS World Tour: Love Yourself in Seoul”, you must be quick, as the new dates are on February 9th and 10th and tickets are going fast. If you have never seen BTS live, you are in for a treat and if you have seen them, the film will bring back happy memories.