Earlier this year, an uncut 35 mm print of Italian director Dario Argento’s 1977 horror masterpiece “Susperia” was found in pristine condition in the storage room of an Italian cinema. Here it had been abandoned since the 1970s until Chicago Cinema Society discovered the completely uncut six reel print with a run time of 98 minutes and original dialogue. A copy of this print reached Denmark in time for Halloween. 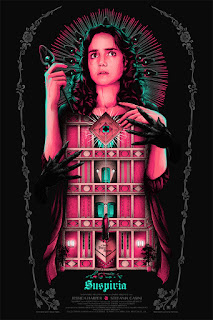 I went to see “Susperia” with my daughter who loves horror films as much as I do, and we were not disappointed. The version we saw was with an English-language dub, though, as originally, the actors’ dialogue was not properly recorded, as each actor spoke their native language, and then the voices were dubbed through additional dialogue recordings.

“Suspiria” has a fairly simple plot. In fact, you could say that it is a fairy tale gone terribly wrong. Suzy Bannion is an American ballet student who travels to Germany to join a famous ballet school situated in the Black Forest. Upon her arrival she discovers that something evil lurks within the walls of the age-old institution and along with her new friend Sara, she tries to expose the horrible secret of the academy.

What makes “Susperia” a masterpiece is neither the plot nor the acting. Instead the hallucinatory intensity of the film comes from Argento’s masterful use of deep primary colours – “Suspiria” was one of the final feature films to be processed in Technicolor- and from the eerie soundtrack by Italian progressive rock band Goblin in collaboration with Dario Argento himself. The demonic score is going to haunt you long after you have left the cinema. The lingering scenes show why Argento is regarded a master of suspense and although the special effects of “Suspiria” is no way near the standards of today, the sustained horror sequences are quite gory and detailed.

As soon as Suzy enters the Black Forest almost like a heroine from a Brothers Grimm’s fairy tale, the tension starts to build, and we find ourselves trapped along with Suzy in a hellish nightmare rich on stark colours, deep shadows, and strange camera angels from which you can tell that “Suspiria” is indebted to not only the German Brothers Grimm, but also to German Expressionist films.
References to the British drama musical “The Red Shoes” (1948) and Lewis Carroll’s “Alice in Wonderland” can be found too, but the vaguely menacing tone and the subconscious fear that linger in every frame make “Suspiria” even more unsettling than any Carroll fantasy.
No wonder that Dario Argento is said to have influenced directors like Quentin Tarantino and David Lynch and that “Susperia” itself has left a notable imprint on films like “Crimson Peak” and “Black Swan”.

Dario Argento is known for his misogyny and embedded hatred of women, but I must admit that I didn’t detect any misogyny-vibes in “Suspiria”. On the contrary, here all main characters are women, from the heroine Suzy (Jessica Harper) over her sidekick Sara (Stefania Casini) to the mysterious vice-directress Madam Blanc (Joan Bennett) and her frightening right hand, the ballet instructor Miss Tanner (Alida Valli). Worth mentioning is also the creepy cook (Franca Scagnetti) who is always in the company of her young son Albert (played by Jacopo Mariani, who is partly Danish as his mother was born in Copenhagen).

Apart from Albert whose main function is to look creepy, there are only few male characters, all in the category of supporting cast. Beside the blind pianist Daniel (Flavio Bucci) and the scary handyman Pavlo (Giuseppe Transocchi), you’ll find a very young Udo Kier as Dr Frank Mandel. There are no male heroes or antagonists, as the men are reduced to minions, helpers or eye candy only – parts that usually belong to women. Instead our heroine Suzy has to fight for herself to survive the sickening nightmare in which she has been placed.

P. S. The title “Suspiria” means “sighs” or “deep breaths” and comes from “Suspiria de profundis” (a Latin phrase meaning “sighs from the depths”), which is one of the best-known and most distinctive literary works of the English essayist Thomas De Quincey. This collection of short essays in psychological fantasy is often considered the supreme prose fantasy of English literature.