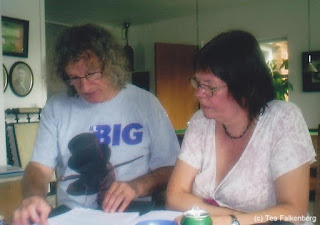 "I've been in print for 29 years and I've always been met with respect and love which I give back in my art. That connection is sacred to me." This quote is from Twitter, written by my writer colleague Clive Barker, but it could as well have been written by me. Clive Barker and I both had our debut in 1983 and after all these years he is now disappointed that somebody has opened a FB page pretending to be him, thereby betraying his respect and love. As for me, I'm disappointed because of the increasing insults, harassment and threats I receive from Slade fans on FB and elsewhere. I know you are frustrated because Don Powell's biography hasn't been published yet, and believe me, so am I, but this is not a reason to harm and hurt the person who has worked extremely hard over the past years in order to give you this biography! In fact, when I read the bad things you write about me, I wonder if it has been worth writing this book at all, as obviously some of you don't appreciate the work that went into it.

First of all you have to realise that this book is not a flimsy biography pieced together in three months by a ghost writer in order to make money. This book is a thorough account of Don's life, not just as a Slade drummer, but as a person who has had to overcome huge obstacles in his life in order to get to where he is today. The book is based on more than 50 hours of interviews with Don as well as 20 years of diaries and interviews with and contributions from 28 of Don's friends, colleagues and family members. Do you have any idea how long it takes to read through all these diaries, make all these interviews and put it all together in a way that is both entertaining and informative? No matter how hard I have worked, it should be obvious that you can't do this within a year or two. Especially as many of the interviews have been with touring musicians with full schedules, making it quite common that I sometimes had to wait a year or two to secure the interviews.

Furthermore you have to understand the process of publishing. Although we had a publisher interested at an early stage, the delays in working with the biography made the publisher back away as the book no longer fitted into their schedule. Publishing houses have schedules, you know, as their publications are planned years ahead, and if you don't fit into the slot, you are bumped back and have to wait another couple of years before the book fits in again. We decided to take the book elsewhere so that we didn't have to wait until 2015 or something to get the book out. Furthermore most British publishing houses don't accept unsolicited manuscripts, so with the first publisher gone, we had to find an agent, but agents are like publishing houses: they have schedules. The agents we have talked to so far have all been very positive regarding the biography, calling it "well written" and "very readable" and telling us that they "reluctantly have decided that [we] just don’t have the time to represent you. Which is a pity." We are still negotiating with 4 agents, and hopefully one of them will have the time soon.

Why don't you just publish the biography independently, you could ask. Well, the book contains 34 photos of which professional photographers own the copyright to at least half of them, demanding up to £400 per photo and that is way out of our league. We need a publishing house to deal with that and furthermore we need a publishing house to back the promotion, book signing tours etc. so indie publishing is out of the question.

Due to the delay in the publishing of Don's book, some of you have started wondering about how professional I really am and thinking that I'm not worthy to write the book. Well, if I wasn't a professional and if I wasn't worthy, do you think Don would have picked me? Besides, could you have done it better? Reading 7,300 hand-written diary pages, conducting 80 interviews, spending days on end researching and writing a 300 page biography in 5 years while dealing with a severe handicap (yes, as of 2008 I've been an invalid) and being a single parent of a teenager is not bad in my opinion.

Don and I have aimed at giving you the best biography possible, the most honest, precise and entertaining account of his life. We have met obstacles and delays, we have been (and are) as frustrated as you, but we couldn't have done it any other way. I know it is hard to be patient, but we are so close now, that the increasing harassment is really a slap in the face. We start to wonder if what you want is not that precise and honest account? Would you rather have the usual drivel that we all know by heart and that we could all have written down and self-published within a few months? I hope not, because if that is the case, all our hard work has been in vain.

Anyway, I started the Don Powell biography blog in order for you to follow the progress of the book so that you didn't have to wonder what was happening to it, now that you've had to wait so long for it to be published. I did it as a service to you, but now some of you have turned it against me and use the blog (and FB) to harass me instead. I'm afraid that if this continues, I'll have to close the blog, as I don't need that kind of hatred. Couldn't we just play nicely instead, bringing back the respect and love we all deserve? I hope so. I truely hope so.

Below you'll find my biography interview/meetings schedule from the past years. That'll hopefully give you some idea of why you've had to wait so long for the biography to be published and why you are still waiting:

2012:
February: approach from British publisher. Agents advise against this particular publisher
February: Proof meeting with Don
March: Don finishes proof reading the biography
March: the proofs are returned from our 2 "professional" proof readers
April: the book is finally finished
June: agent's delay. New agent needed if the book is to be published this side of 2015.
September: negotiations with new agents

The Monkees - caught in a false image 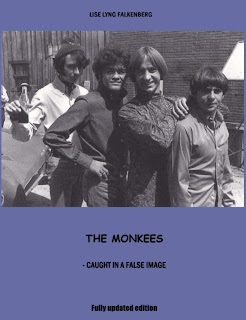 My "old" Monkees biography is now available from Smashwords as an ebook in a new, fully updated version.

"I was impressed. I would highly recommend this book to fans and I would rate it in my top 5 Monkees books." – Monkeemania Downunder, Australia

"Falkenberg's book would be a nice addition to any Monkees fan's collection. It's analysis is more thorough than any other book available on the market." – Band 6, The Monkees Official UK Fan Club, England

"Danish writer settles accounts with the myths about the sixties band The Monkees in her new book" – Fyens Stiftstidende, Denmark

You can buy the book here. Please, leave a review if you do.