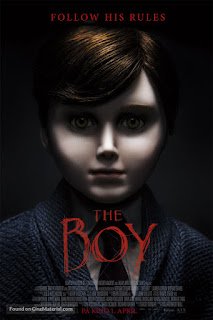 ”The Boy” directed by William Brent Bell is a horror film that my daughter and I watched on Mother’s Day. We were only five people in the cinema that evening and although it’s probably not the most obvious choice for a Mother’s Day film, it was still an extremely small audience. As it turned out, there was a reason for this.

“The Boy” tells the story of a young, American woman, Greta (Lauren Cohan), who comes to England to work as a nanny for the eight-year-old boy Brahms while his parents are away on holiday. Arriving at the spooky looking house in which the family lives, she realizes that the boy is not a real boy at all, but just a doll. However, as soon as his “parents” leave, things start to happen that makes Greta believe that the doll is alive. With the grown grocery boy Malcolm (Rupert Evans) as her only connection to the outside world, Greta tries to figure out what is going on.

So far so good, but to label “The Boy” a horror film is something of an overstatement. Sure, the doll is creepy, but the film is not. There are a few jump scares, but they are only scary because of the loud noises and the story is so predictable that thirty minutes in, both my daughter and I had figured out the plot including the plot-twist at the end that alters the entire film and makes it down-to-earth, ever-so-boring non-spooky. We were both very disappointed in that twist. Furthermore, the characters are uninteresting and the acting mediocre and who on Earth call their son Brahms, in the first place, as it is a German surname, not a boy’s first name!

After having seen “The Boy” I fully understood why people stayed away from the cinema! The only good thing there is to say about this film is, that it only lasts 97 minutes. Two out of five stars: **