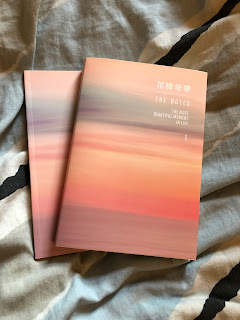 In case you don't know the alternative universe (called BU) of the South Korean music group BTS in advance, I guess it will be very difficult to understand what is going on in “花樣年華 The Notes - The Most Beautiful Moment in Life 1” (or “The Notes 1” for short!) by Big Hit Entertainment.

The BU, which is short for Bangtan Universe, has existed more or less since BTS’ debut in 2013 and in it we follow seven young men and the problems they face in their childhood and youth. Although the names of the seven protagonists are the same as the real names of the seven BTS members, their stories are not BTS’ stories. Instead they deal with all kinds of problem that are relatable and relevant to young people, ranging from loneliness, illness and poverty to abuse, suicide and even murder. As the seven boys grow into men, the BU is expanded to include time travel, parallel universes and a huge amount of refences to mainly European literature, art and schools of psychology and philosophy.

The creation of such an alternative universe is very satisfying for a professional writer such as me, and it is one of many reasons why I have come to love BTS. The stories and the characters in them have always been interesting and multi-facetted, because even though the BTS members personify these characters and lend them their names, Big Hit Entertainment have never tried to make the characters heroes or the story a heroes’ quest. Instead, it is nitty-gritty realism paired with mysterious, maybe even magic and definitely highly intelligent psychological and cosmological aspects!

The story of the BU can be found in BTS’ music videos, highlight reels and other videos as well as in the notes that have accompanied their albums since the release of “Love Yourself: Her” in September 2017. These notes have only told snippets of the story using a deconstructed timeline, but in “The Notes 1” we are finally presented with the album notes in chronological order. New contents have also been written for the book, mainly about Seokjin’s childhood and what Namjoon did when he had to move away from Seoul with his parents. We also get to understand the actions of both Taehyung and Jungkook much better. As such it is a great read and “The Notes 1” comes with a free... notebook, of course!

On the other hand, not all the questions that we as ARMY (BTS fans) have concerning the BU are answered in “The Notes 1”, probably because there is going to be a Notes 2 and more. I for one am tired of waiting and waiting AND waiting to learn what happened to Jimin in the arboretum and I'm annoyed that Hoseok's shirt in Yoongi's motel room isn't even mentioned. We only get a tiny glimpse of Yoongi's dependence on Hoseok and of their own private chat room.

Finally, it is worth mentioning that “The Notes 1” has been written in Korean first and then translated into respectively Japanese and English. It’s the English version that I have read, and I do find the translation rather poor. Sometimes you have to guess what a sentence means, other times the sentences are pure nonsense. The texts at the back of the book haven't been translated at all, which is a shame, as they contain several clues to the story.

The reason I give “The Notes 1” five stars despite its flaws is that we as ARMY have waited for this book for years. Besides, I hope to get the answers to the rest of my questions as well as a better translation when “The Notes 2” is released!