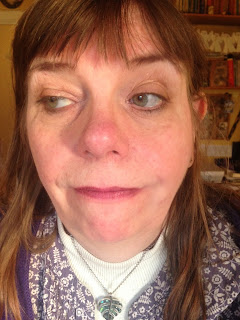 Christmas is over and soon the year will be over as well. For most people this is a time of happiness, of parties, presents, friends, family and a joyous heart. Here in Denmark we even have the saying that Christmas is the festival of the hearts, but this is not true for everyone, unfortunately.

I come from a very small family. I only have my daughter as well as a sister and three cousins of which two live abroad. My daughter is still underage and live at home, but the rest of the family has never been close and even my sister isn’t interested in celebrating a family Christmas. Because of that I am alone almost all of the Christmas days. Sure, my daughter and I have dinner and give each other presents on Christmas Eve, but then she is off to party with friends on Christmas Day and Boxing Day while I am left home alone.

Before I got ill, it wasn’t like that. Back then we spent the Christmas days with friends, but then in 2004 I got ill with a rare spine disease and in 2013 my knees gave in to osteoarthritis and I lost the ability to walk without the aid of crutches and the invitations stopped coming. The same goes for New Year’s Eve where I am alone as well while my daughter is partying with friends.

Of course I have tried to invite friends for both the Christmas days and New Year’s Eve, but they decline the invitations saying that they don’t have the time or they don’t feel like it, and it makes me really sad. I know I ought to be used to it, because they don’t have time for me throughout the year, either. One friend I haven’t seen for over a year, another for two years and the rest just stop by for an hour once or twice a year.

I don’t quite understand why it has come to this. I am the same as I was before I fell ill. My brains and my heart are the same, it is just my damned legs that won’t work, so why are my friends shunning me? Yes, it’s a bit of a bother that even with the new knee that I got in June, I can’t move without aid, I can’t dance or walk very far, but when we became friends originally, it wasn’t because of my legs, was it? I’m still clever, funny and a good listener, so why have they dumped me? Are they afraid that what I have is contagious? Well, it isn’t!

I only have six friends here in Denmark where I live. Three women and three men. The youngest friendship is 10 years old, the oldest 46 years. I have about thirty friends abroad, where the youngest friendships are eight years old and the oldest 28. I therefore never thought that I would be left on my own if I became ill, but that’s what has happened and it has affected me both physically and mentally. “So what? That’s not my problem!” said one of my friends, but it is. Because we are friends, see?

I often say that I need new friends who are not afraid of my illness and who see me for who I am. It is difficult, though, as I can’t get out much. My plea to you all is therefore to think of your friends and family members who are ill and alone. Let them into your lives instead of turning your backs on them and end their devastating loneliness. Then the entire year would be a festival of hearts.