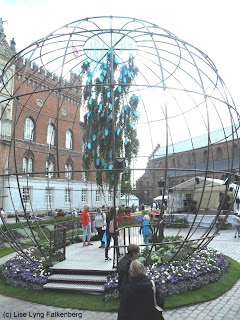 It is no secret that I've been very disappointed in the Odense Flower Festival the past 4 years and that I had thought of boycotting it this year. In the end I didn't, but now I wish I had! In fact, this year the festival reached a new low, which I thought would be impossible! 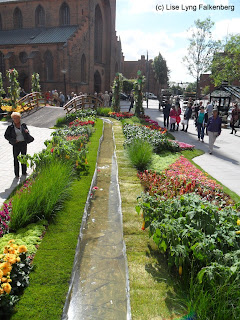 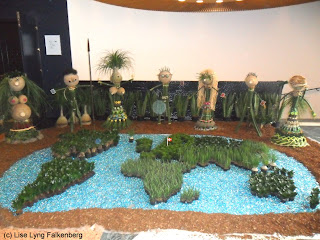 The theme this year was called "Out in the big wide world" and sometimes you could detect the theme in the displays, other times you couldn't. You got the feeling that most of the displays were just put together, using whatever materials the exhibitors had at hand, and then it didn't matter if it fit in with the theme or not. 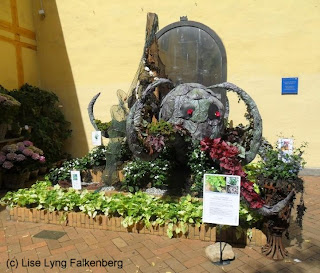 I liked the two new floral sculptures, of course. One was of an octopus and one showed the map of the world and people made of flowers, but other than that… In Lotze's Garden near the Hans Christian Andersen museum, the old flower swan and the old flower heart had been reused and the rest of the displays consisted of cardboard cut-outs. Boring, but I kind of liked the flamingos! 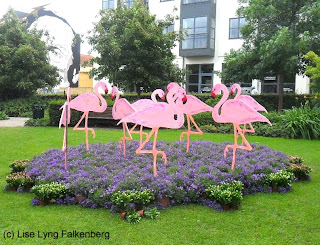 Near the town square, Flakhaven, where the largest display could be seen, were two of the very few displays that had anything to do with the theme. One was an "airport" with suitcases from different countries, which was quite nice, although I would rather have seen suitcases made of flowers than flowers packed in suitcases! 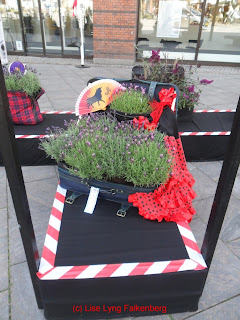 The other display that I liked was, well, I don't know, tables with flags and typical items from different countries. Of course I liked the English one, but it didn't have much to do with flowers. That was it, more or less. Nothing too exciting. 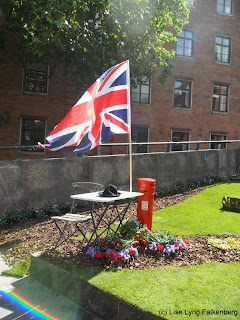 Like last year there was a string of events tied to the Odense Flower Festival. There were beautiful old ships arriving at the harbour, free concerts, kids dressing up as living statues, Indonesian dance, trend exhibitions, square dance and other stuff, but I didn't attend any of it. I'm sure it was all wonderful, but to me it had only little to do with flowers. I did run into a pirate though, who was quite nice and posed for me! 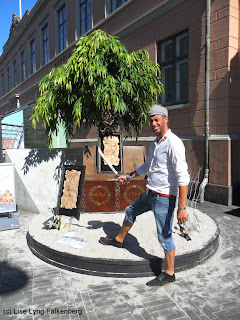 Anyway, I have to remember to boycott the exhibition next year. I know I keep hoping that Odense Flower Festival is going to be restored to its former glory, but after five miserable years, I guess I have to realise that I hope against hope.