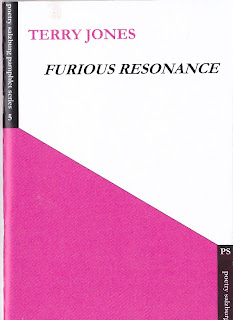 Riding trains can be boring. It can be fun, too and sometimes quite surprising. Earlier this year I was on a train bound for Birmingham, UK. As usual I was writing, minding my own business, when suddenly I heard a voice say, ”Are you writing a novel?” The owner of the voice was Terry Jones. Not THAT Terry Jones from Monty Python, but the editor, writer and former lecturer at Carlisle College Terry Jones

Terry Jones writes poetry and we made a pact then and there on the train. I was to buy his collection of poems ”Furious Resonance” that was just about to be published in the Poetry Salzburg Pamphlet series, whereas he was to buy the ones of my books that have been published in English. So far I don’t know if he has kept his promise, but I sure have kept mine and what a pleasure it was to read ”Furious Resonance”.

It says on the back of the book that the collection ”explores how the spaces of the past and the present, the personal and the political, the conscious and the unconscious, and the living and the dead re-sound across cultures and languages in sympathy or protest with each other.” Big words, but true as “Furious Resonance” is a remarkable collection of poetry. The twenty-four poems make you think, laugh and listen, because Terry Jones has a way with words. His way of using the English (and German and Xhosa!) language is unique, because this is an intelligent poet with something on his heart and mind and an own voice to express it.

Jones’ poetry flows easily. Notice for instance the almost hypnotical cadence of the long poem “Sun” which prevails despite the huge differences in voice and verse in the four parts of the poem. Or what about the imagery of the poem “Sleep-Talking”? An everyday observation made into art. My own favourite is, however, “Preservations”, an unsettling poem about the burning of dictionaries.

“Furious Resonance” is one of the best collections of poems I have read within recent years and to think; if I hadn’t been on that train going to Birmingham that day in May, I would probably never have read it! So the next time someone asks my why I don’t have a driver’s license, my answer is going to be: because I like good poetry!

Wow! Thank you very much - and I'm really pleased you like some of the poems in Furious Resonance. What a fortuitous meeting on that train; can't be everyday two writers meet like that...sounds like the beginning of a novel - or poem, perhaps.

I have to confess I have not yet bought one of your books ( you have a much higher level of creativity productivity than I do...a case of choices, choices!)but I promise I will buy one this very week: I think it will be your Twisted Tales of Thanatos; I like the dark resonances of that title: I remember you told me on the train you thought I had a good title for my short collection.

For myself, I think I'm near to completing a couple of collections - then it will be a matter of finding (or not) a publisher. I have some good news breaking at the end of this month that might help with that project. But thank you again for the posting, Lise Lyng. I'm not myself a blogger or tweeter, and I'm just beginning to try build something like a website

thank you the article really helped me. I hope the articles that are made are useful for all of us.


Good write-up. I definitely love this site. Keep it up