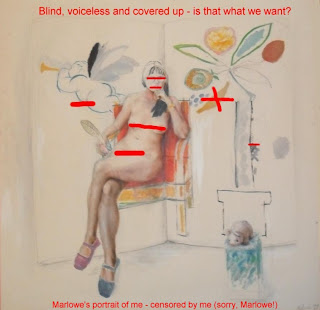 Yesterday I had a frightening experience on Twitter. Each Sunday we have a thing called #writechat where writers meet to discuss writing. Yesterday I asked if people use pen names and why. I got a lot of answers from (American) writers who said they use pen names either because they don’t want their families to read what they are writing or because they are afraid of getting fired from their day jobs as they’re writing erotica. One even sent me an article about a schoolteacher who got fired after 25 years because the parents of her pupils had found out that she wrote romance fiction. A writer from Canada told me that she thought it was an American thing, as she didn’t have that problem in Canada and an American writer wrote me that she thought it was an example of American hypocrisy. I answered that writer, saying that it was probably an American thing. I mean, in Denmark, where I come from, erotica is no big deal, no one would ever get fired from writing that, heck, even our Queen’s husband, Price Consort Henrik writes erotica!

Well, to make a long story short, all hell broke loose because I answered that American writer! Within seconds I was swamped by hate tweets from other American writers blaming me for generalization, for judging other peoples cultures, for being narrow minded (ha-ha-ha!) etc. etc. I didn’t even get to answer that Canadian writer because the hate tweets kept coming. What happened to her and the American one I don’t know, but measured by what happened to me because of me answering one private tweet, I’m not sure if they’re alive anymore. Out of the many writers on #writechat only one – ONE – wrote that everything should be allowed in art. I think he was Norwegian…

Anyway, the whole thing made me think. I always thought that writers were supposed to stick together and fight against censorship and for freedom of speech and not jump the gun on our colleagues if they had a different view than ours. My whole idea of pointing out that if we hide behind pen names because we are afraid of society’s reaction was shot down by the people who’re supposed to fight for the right to say and write whatever we like. Instead I was blamed for being anti-American! Well, I was not judging the US per se, in fact I think it’s a nice country and I have lived in both New York City and Los Angeles, but it was American writers who brought up the problem as being American. All I did was react to it and I’ll continue to do so, because something is wrong if you have to hide behind a pen name in order to avoid getting fired, no matter if it’s in America or Antarctica! If people keep hiding, we’ll never get anywhere and the powers that want to censor and control us have won.

I must say that I was pretty sad and disappointed about the reactions on #writechat yesterday. I guess we still have a long way to go when writers would rather support a system where they can’t use their own names than allow a few (foreign) colleagues to criticize that system, blaming them of being judgmental and narrow minded. I think those writers are going to have a hard time when/if they have their works published as I can’t see how the heck they’re going to handle the critique that any writer gets. And I sure as hell can’t see how we are going to get rid of censorship as long as writers fight each other instead of fighting censorship as a joint community. That’s all. Peace and love, man!
at June 20, 2011

Wow, I'm sorry I missed the opportunity on that writechat to chime in with "writers absolutely must be allowed to write what they write." I have a pen name for my fiction because it's amusing to me and creates a persona I enjoy writing from. My real name can be seen in conjunction with my pen name, so it's obvious that it's just an aspect of my personality. I think there's more of an issue for people being terrified of losing their jobs, plus the well-known overall paranoia that pervades the U.S.A. Much of our leadership the past several decades has been about nurturing fear and it has been effective for some percentage of the population. I'm amazed that these people can write at all, and it must be a weird schizm within, hiding behind a pen name and not being able to be open and feel the pride of accomplishing something. America as a national "personality" has some troubles, to be sure.
Carry on, there are plenty of us who appreciate your perspective and your voice.
Suzanna Stinnett
aka Bell T. Sound

Thanks a lot. Glad to hear from you. I'm not against pen names when people have them because they want to. But if they feel they are forced to have them, that's so wrong!