Pirates of the Caribbean 4 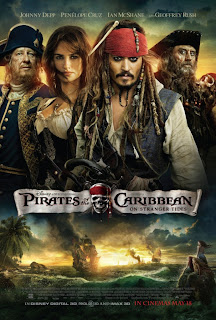 Thin plot, great action and an excellent Johnny Depp. That pretty much sums up ”Pirates of the Caribbean: On Stranger Tides”, the fourth instalment in Disney’s adventure series about Captain Jack Sparrow.

The movie is directed by Rob Marshall and in many ways it marks a new beginning to the series. The old plot from the first three movies, where the love affair between Will (Orlando Bloom) and Elizabeth (Keira Knightley) played a central part, has been replaced by a flimsier plot with the relationship between Jack Sparrow (Johnny Depp) and Angelica (Penélope Cruz) as the turning point. In “Pirates of the Caribbean 4”, Jack is forced by his former lover Angelica to join Blackbeard's crew and to lead them to the Fountain of Youth. Both the Spanish King Ferdinand VI (Sebastian Armesto) and Captain Barbossa (Geoffrey Rush) are after the Fountain, too, and on the way they have to encounter deathly mermaids and retrieve a couple of silver chalices from a grounded ship.

The plot as such is not very interesting and neither are the characters apart from Johnny Depp’s Jack Sparrow and Geoffrey Rush’s Barbossa. Barbossa is really hilarious this time, serving as a smarmy privateer to the British Navy. It is a pleasant surprise, too, that Keith Richards is repeating his part as Jack’s father Captain Teague and Kevin McNally is back as well as Gibbs, Jack’s former First Mate. I suppose Stephen Graham does an okay job too as Jack’s new funny sidekick Scrum, but here the fun ends for me. Yes, Ian McShane fills the part as Blackbeard, but to be honest I had a hard time telling him apart from both Barbossa and Captain Teague and the love affair between the missionary Philip (Sam Clafin) and the mermaid Syrena (Astrid Berges-Frisbey) is no match to the old Will/Elizabeth love story. That brings us to the other love story of “Pirates of the Caribbean 4”, the one between Jack and Angelica, which just doesn’t ring true. Penélope Cruz is not convincing as Angelica and I don’t know what seems most unlikely; that Angelica grew up in a convent or that she is the true love of Captain Sparrow. She is boring and her thick accent is more than annoying.

When that is said, I must admit that I enjoyed “Pirates of the Caribbean 4”. It is tighter and funnier than part 2 and 3 and I loved the action scenes, the mermaids and Johnny Depp’s acting. Too bad that the 3D effects weren’t used for much, though. You could as well have seen the movie without.

The way “Pirates of the Caribbean 4” ends, I’m sure there’ll be a part 5 in the future. Hopefully without Penélope Cruz. Please, bring back Keira Knightley. Elizabeth ruled!