The last time I was in Birmingham in the UK, I visited Birmingham Museum and Art Gallery. Since 2005 Birmingham has been my home away from home, but I had never been to the BMAG before which is quite strange as it's situated in the centre of the city, it's free and it's beautiful! 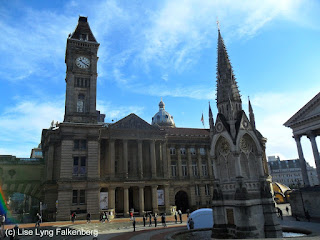 On street level you'll find the Gas Hall exhibition gallery housing temporary exhibitions, but when I was there, "Pharaoh: King of Egypt" had just closed, so I entered the building from Chamberlain Square and walked up the stone steps inside, where I was greeted by the charming Coronation Street mural.
Upstairs there's a reception where you can buy a visitor guide and map (advisable!) and then you reach the Round Room. This is probably my favourite room of the entire museum. The round, red walls boast paintings in three tiers including Walter Langley's "Never Morning Wore to Evening but Some Heart Did Break" and Henry Stacy Marks' "Dominicans in Feathers". The most spectacular thing in the Round Room is, however, the centrepiece: Jacob Epstein's sculpture "The Archangel Lucifer". This wonderful, ambiguous bronze sculpture from 1945 is in my opinion the most intriguing work of art in the entire museum, but you won't find it on postcards anywhere. On BMAG's virtual online tour of the museum it isn't quite there either, as the private parts of Lucifer is covered with leaves. Epstein used a female model for Lucifer's head, but a male model for the body, and the penis of the angel was thought quite obscene as it isn't one of the small ones you'll see on renaissance sculptures, but a normal sized one. There is a certain amount of sexuality stemming from the winged devil, not just because of that much talked about penis, but in Lucifer's face and posture, too. At the same time it depicts something both sly and beautiful and I think Epstein has really succeeded in portraying a fallen angel. I love this sculpture. 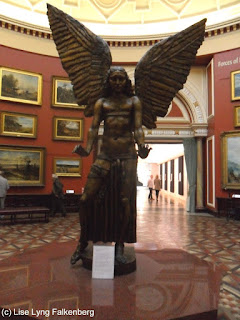 Turning to the right in the Round Room you walk through the gift shop and on to the Industrial Gallery which is another breathtaking room. With its skylight, wrought iron details and Soho sphinxes, this original part of the gallery is itself even more interesting than the items on display, which consist mostly of a collection of stain-glassed windows and different items of arts and crafts. 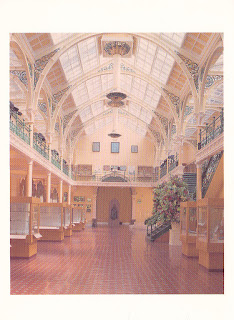 The Industrial Gallery leads to the Buddha Gallery, a whole room with sculptures and other images of Buddha. I found that very interesting as I had never seen a gallery in any other museum in the western world dedicated to Buddha. Wonderful. From the Buddha Gallery you reach the entrance to the Edwardian Tea Room, a beautiful room for sure, but the counter and the rather boring tables and chairs ruin it a bit. They make the room look what it is: the cafeteria of the museum.
Back in the Round Room instead of turning right, you can also go straight ahead through a room with Asian art to the rest of the museum. The main level of the museum has 33 galleries in all, so you can easily get lost. The artworks span from the Greeks and Romans over 14th to 19th century art to modern and contemporary works. The most famous works are probably BMAG's collections of Edward Burne-Jones paintings and then their Pre-Raphaelite collection. I must admit that Burne-Jones is not exactly my cup of tea, although I've always loved the Pre-Raphaelites. The rigidity and muddy colours in his paintings don't appeal to me, though, and to be honest, I found the Pre-Raphaelite collection a bit disappointing, too. I know it is one of the world's largest, but the paintings on display are not very interesting. To me only a few were really good, namely Arthur Hughes' "The Long Engagement"; William Holman Hunt's portrait of Dante Gabriel Rosetti and Dante Gabriel Rosetti's "Proserpine". 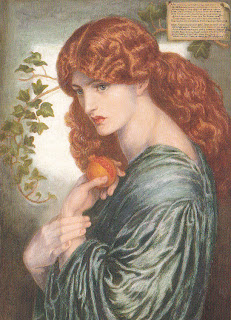 I have seen much better Pre-Raphaelite collections other places in the world, among them in Tate Gallery in London. While I visited the BMAG there was an exhibition of Victorian art from the Tate named "Love and Death" and it featured some of these works along with the best of BMAG's Pre-Raphaelite works. I was disappointed that the exhibition only consisted of about 20 paintings and a handful of drawings and etchings, but when that is said, the works themselves were amazing. Most of the paintings depicted love as a young, naked boy, who probably didn't seem as offensive in Victorian days as Epstein's Lucifer did in 1945, but today these images of love came across a bit paedophile to be honest! I had to snigger too, when I realised that most of the women on the paintings looked exactly like Helena Bonham Carter, especially Anthony Frederick Sandys' "Morgan Le Fay".
The main work was "The Lady of Shalott" by John William Waterhouse, which of course is brilliant, but other paintings attracted me even more, among them Waterhouse's "Saint Eulalia", Herbert James Draper's "The Lament for Icarus" and Sydney Harold Meteyard's "Hope Comforting Love in Bondage". 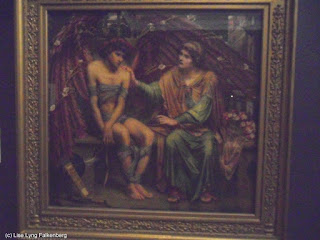 As most of these wonderful paintings aren't depicted on any of the BMAG store's postcards, I was glad that you were allowed to take photos without flash. The pics turned out a little dark, but it's better than nothing.
Other interesting exhibitions on the main level include "The Staffordshire Hoard" and "The Birmingham School of Art". In fact I found the latter much better than the Pre-Raphaelite collection!
On the top level of the museum, you'll find another 12 galleries, some of them covering ancient cultures, but half of them are dedicated to "Birmingham: it's people, it's history". I really liked that as it told the story of Birmingham in a very entertaining way, showing both items from everyday life and items of historic value. If you're interested in Birmingham, you really have to see it and especially a working model showing how guns were made was amazing along with the World War I and II exhibits.
All in all I spent 3 hours at the museum, but I could easily have spent 3 more, so if you plan to visit BMAG, be sure to have plenty of time. There's a lot to see, the building itself being one of the main attractions, and I'm sure I'll return to this museum not just once or twice, but over and over again.

Nice way to decorate your walls. I have never done that. My effort to beautify the walls in my house was to order big-sized canvas prints from wahooart.com, from images of western art. I use the same angel motifs in all of the rooms painted by different painters, such as this one by very interesting English artist Stanley Spencer, http://EN.WahooArt.com/A55A04/w.nsf/OPRA/BRUE-8LT7K6.

The BMAG in such a prominent position in Birmingham, yet many people don't know it's there! I have been a few times it makes a different day out and does have some lovely art, even for people like me who know nothing about art! I'm now considering purchasing, and have been recommended a fine art dealer in Birmingham called Turners, wish me luck!

What's up i am kavin, its my first time to commenting anyplace, when i read this paragraph i thought i could also make comment due to this good article.